Just collected a parcel from the post office that arrived whist I was in India - a new edition of The Jataka Tales by Ken and Visakha Kawasaki. I already have a copy of these tales translated by E.B. Cowell and originally published Cambridge University Press in 1895-1907 and reprinted later by the Pali Text Society but this edition has very small print and an antiquated English. I am delighted that the new edition has a clear typeface and is a much more readable English translation. I have always loved The Metamorphoses by Ovid since I first encountered it at school. Ovid's collection of myths is a seminal work in the Western literary cannon and was an invaluable source of inspiration for artists and writers wanting to illustrate the key stories of classical mythology particularly in the Renaissance. Artists could stimulate their own and others imaginations with dramatic images of transformation between the animate and inanimate worlds of  trees, stones, animals, humans and gods, deriving both insight and wisdom whilst being entertained.

These stories of the Buddha' former lives occupy a similarly magical world of transformation from animal to human, passing from one life to another over many generations of rebirths. The Ven. Bhikkhu Bodhi has written this to accompany the three volumes.


'Whereas Western intellectuals seek the essence of Buddhism in its doctrines and meditation practices, the traditional Buddhists of Asia absorb the ideas and values of their spiritual heritage through its rich narrative literature about the Buddha and his disciples. The most popular collection of Buddhist stories is, without doubt, the Jātakas. These are the stories of the Buddha's past births, relating his experiences as he passed from life to life on the way to becoming a Buddha. At times he takes the form of a bird, at times he is born as a hare, a monkey, a prince, a merchant, or an ascetic, but in each case he uses the challenges he meets to grow in generosity, virtue, patience, wisdom, and compassion. This anthology of Jatakas, ably told by Ken and Visakha Kawasaki, remains faithful to the original yet presents the stories in clear and simple language. It thereby makes the Jātakas accessible even to young readers and to those for whom English is not their first language.

I hope that this collection of Jātaka stories–entertaining, uplifting, absorbing, at times amusing, but always fascinating–will enable the modern reader to appreciate the impressive literary heritage of Buddhism and the simple beauty of its basic teachings. 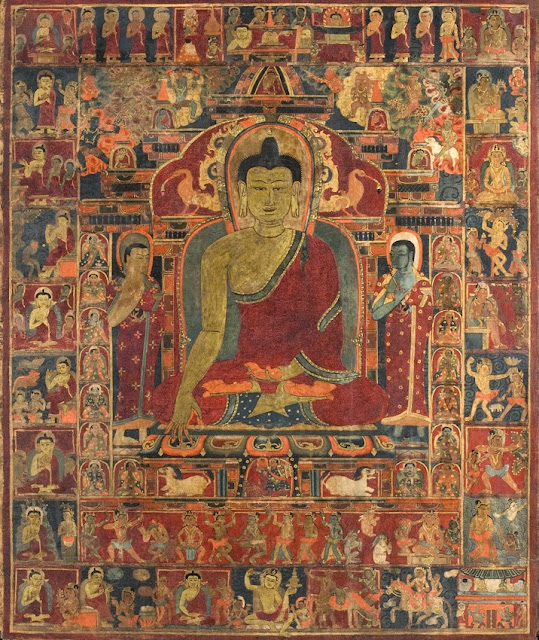 Reading the Jatakas and the Suttas the world of ancient India and the actual places the Buddha lived in,  which formed the basis of my recent trip, come to life as they are often referenced within these texts. The sense of re-enchantment of the ordinary and everyday is one of the great pleasures derived from reading these stories as well as the insight into human psychology, nature and the wise council they contain like the Fables of La Fontaine and Aesop. 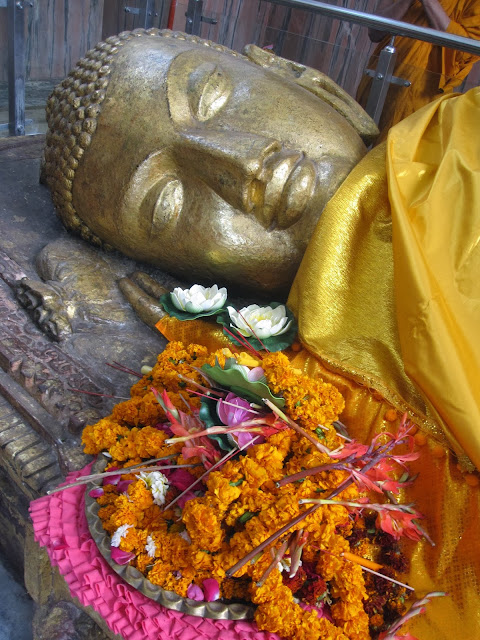 Posted by Alan Mitchell at 2:30 AM No comments: 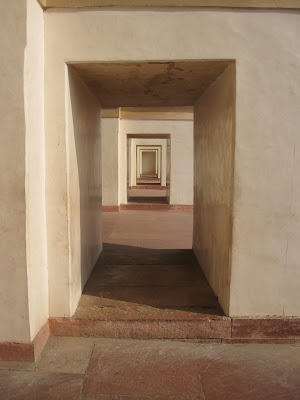 Just back from travelling for three weeks on pilgrimage to the historical sites associated with the key events of the life and death of the Buddha in Uttar Pradesh and Bihar in North East India along the tributaries and fertile planes of the great Mother Ganges.

I didn't keep a travel blog during the journey as I wanted to use the time for quiet internal reflection rather than ongoing exposition.  I took the following books with me during the journey which I found very helpful for exploring both inner and outer geography.

I have formulated some thoughts however in response to my MA studio and research presentation feedback from Claire Hope that attempt to explore possible connections between my painting and interest in Dhamma practice. The following words are an attempt to consolidate that response more precisely.

I recognise that I may have made the research question more of a formal extended essay about parallel issues and loosely related contexts in certain contemporary artists that was too contracted and left little room for a more open ended exploration of the issues I have been exploring more directly in the studio practice and paintings themselves. This kind of more speculative thinking has been present in the blog. Some of the key concerns in my work are:

Evoking a sense of desire and loss for forgotten histories and identities.

Recognising that images created to capture and keep fading memories are themselves inevitably subject to change, decay and deterioration and that the fragile, impermanent and transitory nature of both the photographic images and the flat papery surfaces associated with these images are fleeting and ephemeral like the realities they represent

Investigating the mimetic quality of oil paint to suggest a tangible physical materiality in addition to its own and to create spatial illusions within the traditional context of the trompe l'oeil game of 'shadows and mirrors'.

Painting a series of frames inside frames to invoke both the presence and absence of the image simultaneously to challenge pictorial conventions even as it functions within them and question the nature of real illusions and illusory realities.

The obfuscation of the image - the attempt to explore how to make an assertion of a negation as 'something' rather than 'nothing' - seems to have emerged in my work in the last year or so and is certainly something I want to explore further.


Pictorial conventions are based on perceptual conventions - vision itself is a picture - 'ut pictura ita visio' (Kepler). Both the illusion and the reality are conditional, compounded, conceptual not ultimately 'real' but mentally constructed and projected. The picture can only represent the limit of vision and of pictorial conventions and representation to present the 'real, although it is itself a phenomenal reality.  I think I am perhaps trying to de-construct this pictorial convention as you might deconstruct language in a literary sense.   Perhaps 'de-picting' the image in the sense both of depicting the image - making an image of an image - and 'un-painting' or 'un-making' it as a picture, unpicking the way we 'stitch up' our vision of reality to reveal the seams holding it together.

'Mind the gap' This recorded message for passengers leaving certain trains on the London underground may not exist anymore but when it did it always stuck me as having a significance beyond it's immediate meaning. Could the 'gap' we need to be mindful of be the one between the way things actually are and the way we think they are or should be......

In Buddhist terms I am attempting perhaps to investigate and align with key insights into the characteristics of observable reality which include both the subjective psychology of the one who experiences and objective phenomena experienced through the six senses bases and five aggregates that constitute 'personality', as anatta, (non-self) anicca (impermanent) sunyata (empty) tathata (just so, thusness) dukkha (unsatisfactory).

These have found expression in related artistic traditions historically - like the Chan (Zen) paintings, which function as 'visual dharma'. I suggested in the presentation that this was also an area of concern or interest but did not really develop it overtly in the research question as I was unsure how to articulate it formally or if indeed it is overt in the work itself.

This extract below by Gregory Levine and Yukio Lippit from the exhibition 'Awakening: Zen figure painting in medieval Japan' at the Japan society in New York puts this succinctly with a quote from a key Mahayana text

'Medieval Chan/Zen figure paintings, here often allied with calligraphic inscription, have special capacities that make them particular places of visual encounter with the dharma. The embeddedness of these images in their particular circumstances of painterly and calligraphic practice, their institutional contexts, their self-conscious deployment of the ideology of Chan/Zen transmission, and their rhetorical narratives of awakening compel us, we believe, to look and look again.'


Last month passing through London heading North to Uclan for MA studio practice and research module critical presentations I dropped into the Vand A to see the 'Masterpieces of Chinese Painting exhibition'. I was struck particularly there by the Chan (Zen) 'apparition' paintings' or 'shadow painting' made in a monochromatic ink wash technique that developed during China’s Southern Song Dynasty and was closely associated with the Chan school of Buddhism. Descibed in the commentary as wangliang hua in Chinese or moryo-ga in Japanese it is characterized by faint, wet ink, sketchy lines, minute details, and a lack of fully realized forms that aim to express the transient and illusory nature of the world of appearances.

I am sorry to rattle on about Dhamma practice and studio practice of painting at the same time but I really am very interested in practising both not just in a dogmatic, theoretic, intellectual or purely rational way but in a practical and empirical way that challenges me as a human being profoundly especially when attempting to develop an artistic 'language' and an intuitive understanding not easy or even perhaps possible to articulate in words.

I go back to teaching full time in January so will probably not make very swift progress but will try to use the print room at Uclan for a couple of extended sessions at Easter and in the summer and will hopefully be able to exhibit the other students in 1st year MA show. Still not really sure if I can manage the whole MA this year whilst working full time - I think it will just be these two modules for now. 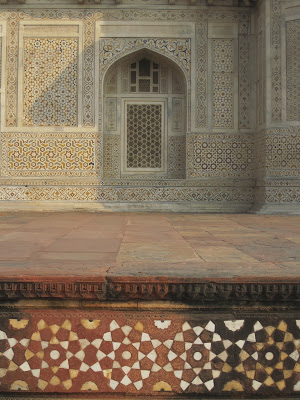 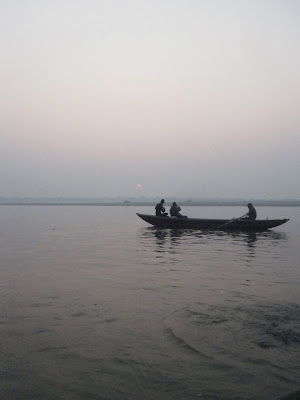 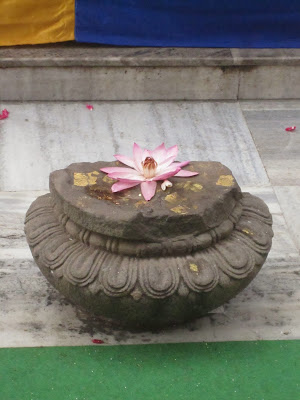 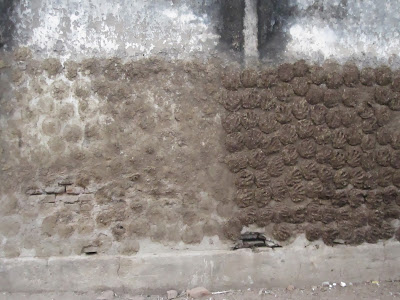 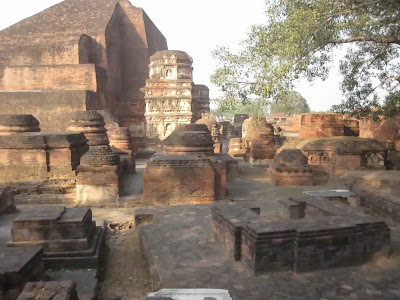 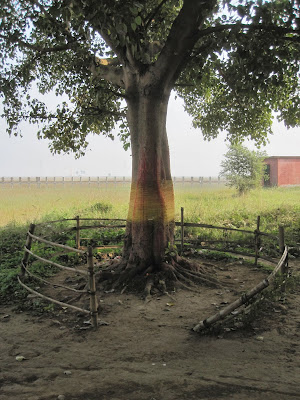 Tree next to Kesarya stupa 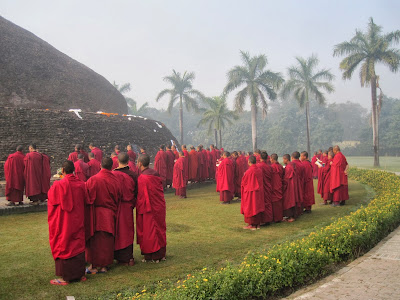 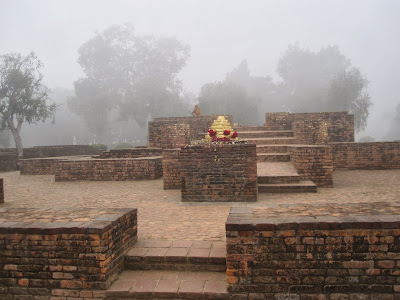 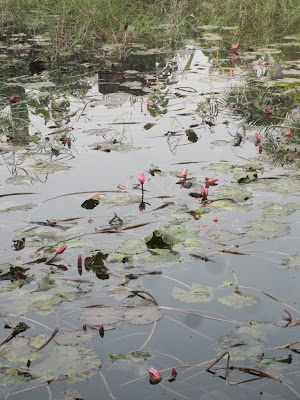 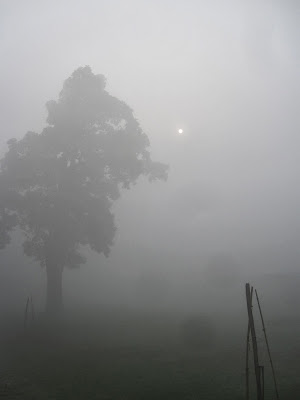 Posted by Alan Mitchell at 12:45 AM No comments: