In Praise of Folly

This summer the early music festival in Bruges is entitled, 'Lof Der Zotheid' after the 15/16th cen. Dutch humanist Desiderius Erasmus' book of the same name in which the personification of the goddess 'Folly' narrates the full extent of her power over gods and mortals, providing an mask for Erasmus, made even more complex by subtle double ironies, to lampoon the absurdities of his own day in church and state.

I decided to re-read my old school copy in preparation. The pursuit of 'happiness' through ignorance and self-delusion was, its seems, the same then as it is now - as Folly says,

"What difference is there, do you think, between those in Plato's cave who can only marvel at the shadows and images of various objects, provided they are content and don't know what they miss, and the philosopher who has emerged from the cave and sees the real things ? "

Fortunately early music can be heard at other times of year as well and Paul Van Nevel's Huelgas Ensemble gave a powerful performance on Saturday evening of the 17th century Portuguese composer Joao Lourenco Rebelo's Vesper Psalms and Lamentations at the concertgebouw.

Meanwhile I was delighted to find this hand-thrown terracotta water jug for only 6 euros in a flea market on the Langstraat last week. Although I doubt it is very old (the glaze seems too shiny and new) it fits well the profile of the pot fragments that were dug out of the terrace with it's medieval profile and moreover is eminently useful. 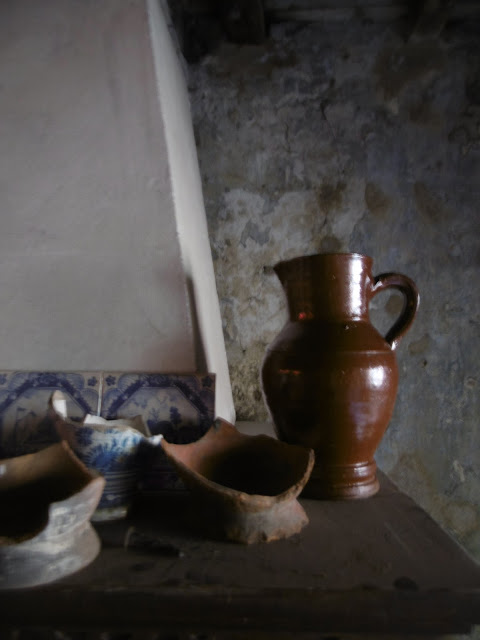 With the brick floor laid in the hall and drying ready for a clean and 'polish' I shifted focus to the walls which have already been prepped and worked up a leveling coat of NHL 3.5 as a preliminary to adding a finishing layer with finer sand. I have quite a few square meters of wall to cover before the end of June but I can reasonably manage around 5 or 6 in a day. P worked on fitting up the cupboards and surface for the sink, oven and washing machine for the new small kitchen so I can can tile and plaster behind. When I can get the plumber and electrician to connect gas and electric to the mains here I can cook ! 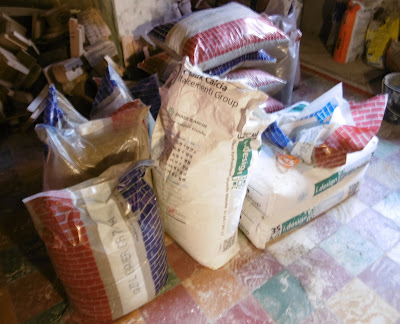 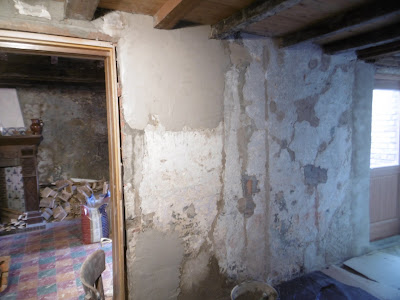 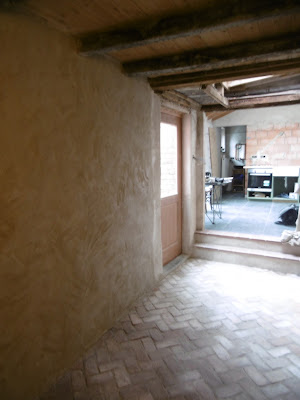 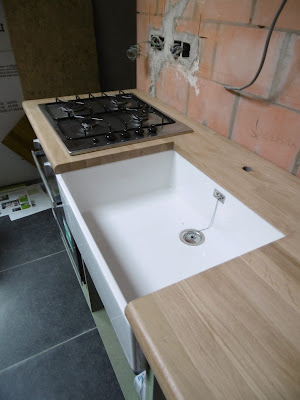 In 'Loft Der Zothied' Erasmus scholarly theology and classical humanism is balanced by robust common sense and waspish humour and irony that perhaps owes as much to the folk wisdom of his day as it does to his formidable formal schooling and academic career. One can surely detect a similar vision of human folly in Breugel's 'Netherlandish Proverbs' in which the artist creates a typical landscape  peopled by theater of fools embodying through their outlandish behaviour a rich variety of popular idiomatic folk wisdom.

Posted by Alan Mitchell at 10:48 AM No comments:

In M. R. James' ghost stories the over-curious antiquarian, archeologist or scholar of ancient manuscripts, invariably a solitary academic bachelor, in his pursuit of hidden or forgotten knowledge or treasure, digs too deep into the past uncovering and disturbing a festering, half forgotten evil intent, locked inside seemingly innocent, inanimate objects or otherwise pleasant and innocuous places.  Seeming to feed off his obsessive fascination, it seethes with a generative power, haunting him quite literally with the manifestation of the supernatural in ghosts that are almost physical, tangible apparitions full of foreboding and psychological terror.  Had James been Roman Catholic, instead of Anglican, he might have found it easier to reconcile the rational to the supernatural without using the veil of fiction to explore these problematic states.

Digging the terrace in the summer to place the new septic tank and drains revealed an evil, muddy horror reminiscent of the trenches of the first world war, in which a great uncle died at only 17 years old, the boy pictured right in the painting I made below entitled 'ghosts', which when I was making it felt like a 'haunting'. However, neither ghosts nor treasure came out of this excavation but what it did reveal is a small quantity of pottery, some of it almost certainly medieval and later and other curious things including bones, shells and rusty handmade nails. Clearly the pottery, clay pipes, bones and shells along with evidence of an old bread kiln shows domestic activity centered around food that included a diet of bread, meat and shellfish, and tobacco for smoking. The green salt glazed tiles and the decorated yellow and brown medieval style tile fragment and the fragment of Dutch style delftware all seem more interesting than the mostly brown crocks but I was delighted to discover a stoneware bottle neck with the face of what look like 'The Green Man'. I am hoping to identify each fragment more accurately with some local help and excited to begin digging the French drain against the back wall of the house to see what else comes up from the past. Scraping back layers of accumulated decoration from walls and cleaning mud off fragments of long forgotten or lost detritus is deeply satisfying because of its intensely physical nature and the sense that this is a direct encounter with the past as a continuous presence in the here and now. I think there is something of this in M. R. James ghost stories too. 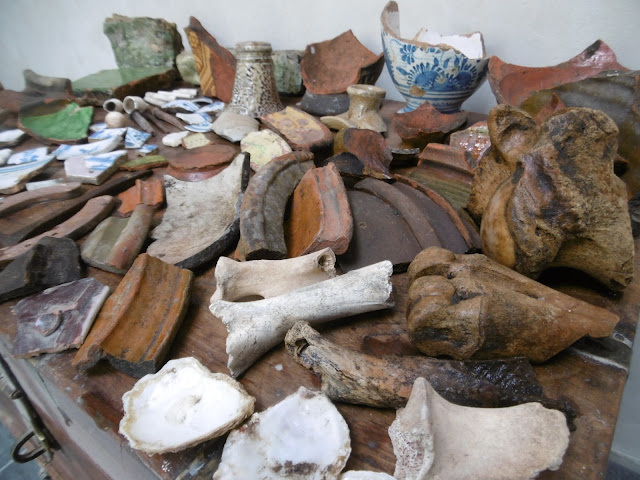 Posted by Alan Mitchell at 8:20 AM No comments:

Clearly context is crucial to the meaning and function of any work of art. Carl Andre's famous or infamous ( depending on your point of view) 'Equivalent VIII' more popularly referred to as 'The Tate Bricks' which caused such a controversy in the British press when it was exhibited for a second time at the Tate Gallery in 1976, owes much of its meaning to the fact that it was displayed in a gallery space and not on a building site - a principle of modernism that can be traced to Marcel Duchamp and his famous 'ready-mades'.


Andre's seminal minimalist aesthetic is clearly in retrospect historically significant and his visual influence is arguably evident in artists as similar and diverse as Sean Scully or Agnes Martin whose works are ostensibly concerned with regular patterns of equivalent units although this is perhaps only a superficial visual similarity.


'Although each of the eight shapes was different, they all occupied the same amount of space in cubic centimetres, which accounted for their visual equivalence. He therefore entitled this exhibition Equivalents. ..........Andre added on 12 May 1972 that none of these pieces was sold from the Tibor de Nagy exhibition and he afterwards returned all but 200 of the bricks to the brickyard to get his money back. The original bricks were sand-lime bricks from the Long Island City Brickworks. When he decided to reconstruct the pieces several years later he found that this brickworks had closed, so he used firebricks instead. These are approximately the same size, but yellowy-brown instead of bluish white.'  (From the Tate Gallery catalogue entry.)
Sean Scully has documented in photographs and texts his interest in the patterns of dry stone walls on Aran or brick warehouse facades in New York and Agnes Martin was apparently a dab hand when it came to making the abobe walls of her residence in New Mexico. My own current preoccupation with patterns and brick owes as much to practical necessity as it does to aesthetics although the two are not easily separated. 'Shower' below  is still waiting to have the glass panel installed before it is fully finished but it represents a significant step forward from the outside toilet it has replaced.

The reclaimed brick floor in a herringbone pattern is half finished. A remarkable number of these 17/18th century handmade bricks have the worker's finger marks baked into the clay, many of them quite small that suggests they were using child labour in the brick kilns to press-mold and stack them before and after firing. Now that the damp bricks are being used up the woodlice that came into the house with them and which I have been gently ejecting have started to leave. These benign little creatures do not damage sound wood or carry disease but they do like the damp corners which have almost all disappeared inside. 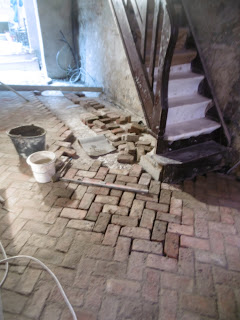 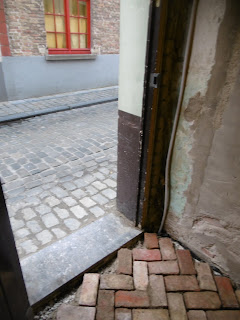 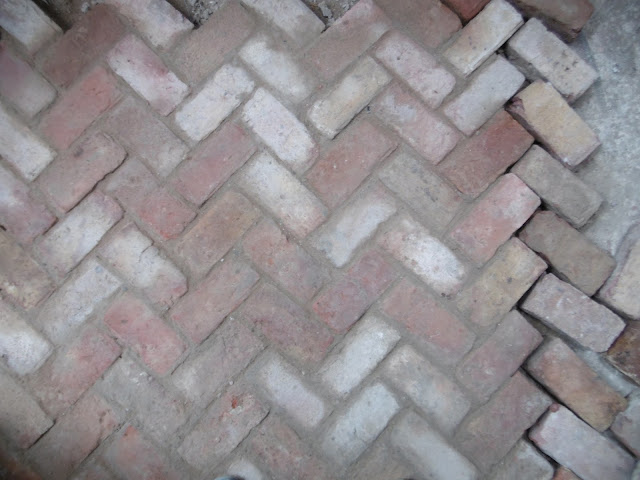 'P' salvaged the blue stone window sill in the bathroom and I lime mortared around it to create the profile. 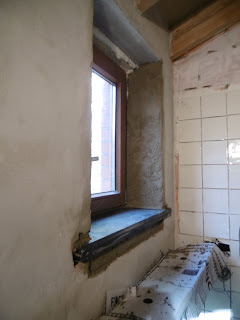 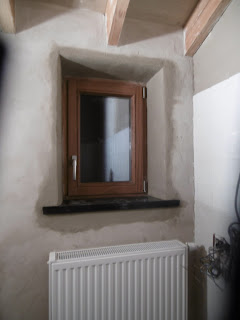 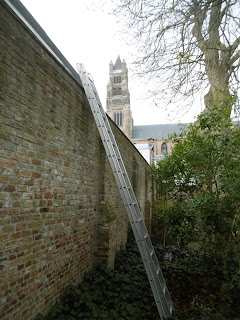 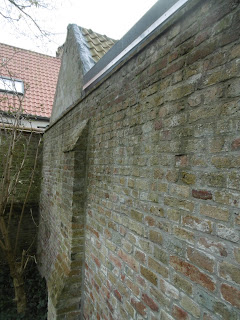 I was also up the ladders again this time in the garden of the Hof Van Pittem to re-point the top of the party wall I share with my ecclesiastical neighbour. It would be very nice if I could open a small door under the stairs and access this lovely garden from the hall but this is pure fantasy! On the other side I have further brick repairs to make in the summer. 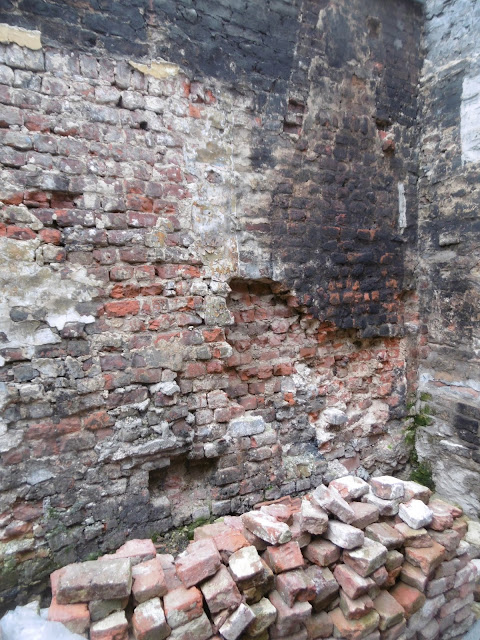 You can see clearly the staining and profile of an old 17th cen. or earlier bread kiln and chimney stack that occupied the corner of the terrace, the remains of which were discovered in the old storage space behind the outside toilet which was demolished last summer to enlarge the terrace and prepare for the rebuilding of the kitchen and bathroom. I plan to repair this section wall with lime mortar and the remaining old bricks.

Posted by Alan Mitchell at 1:51 AM No comments: