And if you can't shape your life the way you want,
at least try as much as you can
not to degrade it
by too much contact with the world,
by too much activity and talk.

Try not to degrade it by dragging it along,
taking it around and exposing it so often
to the daily silliness
of social events and parties,
until it comes to seem a boring hanger-on.

As Much As You Can. C.P Cavafy.


I recently read Penelope Fitzgerald 'The Bookshop'. This book seems to be about about the private interior life of reading and the public life of action and social interaction in the central character of Florence Green, a childless, middle aged widow who opens a bookshop in the remote and isolated town of  Hardborough. ( 'hard' by name and 'hard' by nature it turns out). Like the poem above the book expresses how the inner life needs to be protected and how it can be compromised and indeed degraded by contact with the outer world.

Set in the late 1950s the book charts her renovation of 'the old house', a damp, dilapidated and neglected property, and her realisation of a dream driven by the direct and painful experience of love and death, (Eros/Thanatos)  The loss of her devoted husband in the war and the recollection of their shared passion for reading and books is the internal engine that gives her the courage and energy to outface the opposition she encounters, including a resident poltergeist, as she sets up both bookshop and takes up residence in the old house she has bought.

The character of Mrs. Gamart, an upper-class woman of power and influence in this small backwater, who wants to use the old house as an arts centre, and is driven by malice and envy to oust Florence from her bookshop and destroy her by cunning and devious means, is matched by the character of Mr. Brundish.  He lives in splendid, if somewhat lonely isolation in the oldest house in the town, and offers genuine and noble support to the project from beginning to end. It is to him that Florence goes when she wants advice about whether to sell Vladimir Nabakov's controversial book 'Lolita', asking him, 'is it a good book ?'  His subsequent sudden death from a heart attack, as he returns from defending Florence by confronting and challenging Mrs. Gamart, marks the rapid unraveling of her bookshop venture and her ultimate failure in Hardborough, as she finds herself bereft of all support, even from those she has trusted and relied on most for help.

''Everyman, I will be thy guide, in thy most need to go by thy side'' -- the words of the medieval morality play are inscribed encouragingly on the bookmarkers in the two old Everyman volumes, a Ruskin and a Bunyan, which are all Florence has left when she's been run out of town, alone, homeless, shopless and nigh on bookless. And one's heart is stopped at the ironic gap between the good old words and the awful present reality, sobered yet once more at this potently slim novel's indictment of small-time Little Englandism successfully doing its philistine worst.

Having read the book about a month ago I was surprised to see it had been made into a film and went to see it.  The biggest difference it seemed to me was the ending. The book is much bleaker and offers little in the way of moral certainty or final resolution whereas the film provides both in abundance.

What criteria can we use to define a 'good' book or indeed a 'good' life ? Are aesthetic, ethics or truth  significant?  Is outward popularity and commercial success compatible with or at the expense of inner contentment or satisfaction?  Are goodness in life and art the same thing ?

Absence, loss and the recollection of desire are powerful stimuli to artistic creation in the poetry of C.P Cavafy.

When They Come Alive.  C.P Cavafy.


The Simon Lee Gallery says this about the work of Claudio Parmiggiani, whose work was included in the exhibition 'Beyond Borders' which I saw recently with students at the Boghossian Foundation at the Villa Empain. This remarkable Art Deco building itself seems to be 'a house of memory and dreams', a corporeal repository of both lost and recollected pasts, spanning much of the 20th century. It almost derelict when it was bought and renovated by the current owners.

The work of Italian artist Claudio Parmiggiani is concerned with themes of absence, the inevitable passage of time, fragmentation and silence. Deeply personal meditations on life and death, the power of reflection and feelings of the sacred are realised in concrete objects, photographic and painted images, and in his signature, 'Delocazione'. Inaugurated in 1970, these haunting works use powder, soot and fire to create shadows and imprints on paper and board, resulting in a sense of absence while at the same time making manifest an unmistakable human presence, tangible, yet not corporeal.


My own effort to explore ideas about the passage of time, loss and absence in the corporeality of an oil painted illusion can be seen below in this painting in oil on board from the series 'Fugitive Images'.

1. I am sure to become old; I cannot avoid ageing.

2. I am sure to become ill; I cannot avoid illness.

4. I must be separated and parted from all that is dear and beloved to me.

Posted by Alan Mitchell at 6:51 AM No comments:

It was a small house, and the whole point was its simplicity, as he'd known it would be, the very act of construction tempered by a longing to have next to nothing. Not much money, according to Iffy, a house for one artist built by another, both fired up with ideas about space, form economy, something mystical as well as technical in Orban's soul. 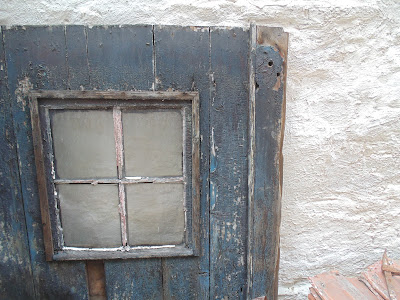 The exhibition of Luc De Meyer's work 'Tussen kruipend mos' (between creeping moss)which opened on Sunday afternoon at the Pinsart Gallery in the Genthof featured a series of drawings and collections of disparate fragmentary objects set into three dimensional spaces resembled small scale rooms or set designs. The subtle muted colours and carefully nuanced relationships between forms and spaces in these small 'wonder-kammern' created interesting and mysterious resonances within each assemblage of curios objects and the Pinsart gallery space itself, which appeared like a larger 'cabinet of curiosities' old and new. The stream of time and tide that  dislodges objects from their original context and dislocates them in time and space into new and often startling configurations was evoked in sensitive and whimsical visual compositions. 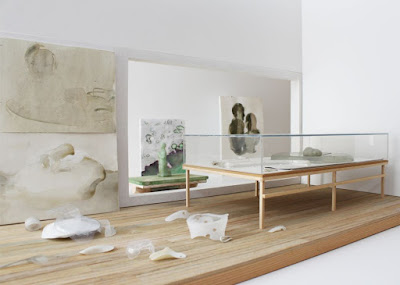 Working in the terrace on the giant jigsaw puzzle of recycled old bricks with their pink-ochres and bleached creamy whites is hard work but very satisfying. The weather is still good and the blue sky and golden brown beach and chestnut leaves complement the space. I find almost the same colours, forms and processes here as in the work in the gallery. Art and Life have no discernible line of separation. 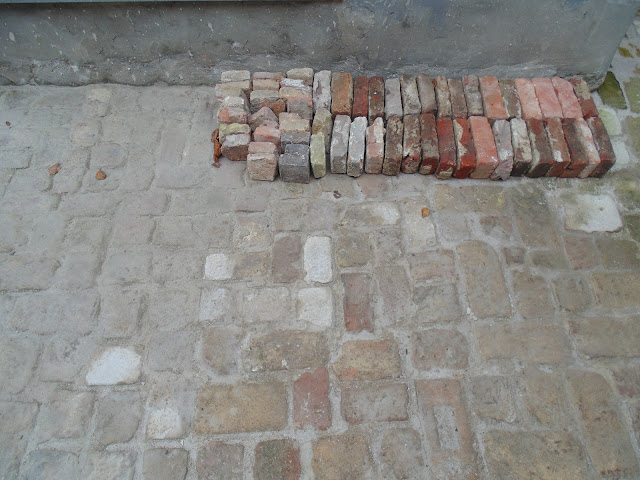 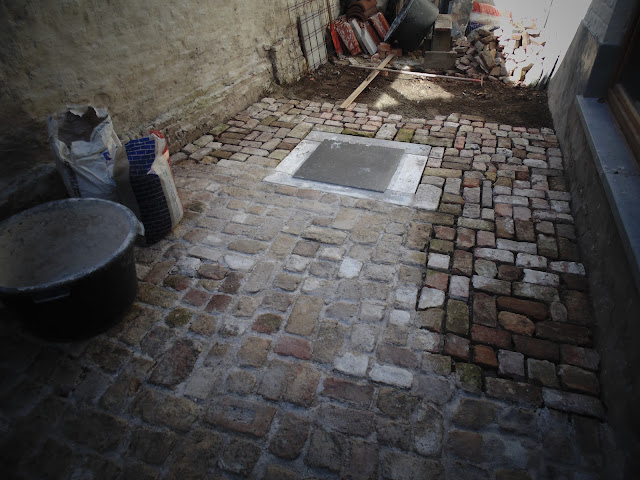 Posted by Alan Mitchell at 2:30 AM No comments:

Before the summer holiday Patrick and I constructed bookshelves in the alcoves either side of the fireplace based on rough designs and measurements. With a simple plinth and cornice and a few coats of white paint far from reducing the size of the room they seem to increase the space, especially with the hidden illumination behind the cornice, and give a better sense of scale and proportion to the room. The rhythm of the shelving creates a counterpoint to the rhythm of the ceiling beams and the horizontal lines of the plinth and cornice follow and carry over the lines of the window sills and mantle piece. They are ready to be filled slowly with the accumulation of books which has built up over the years. I am already imagining evenings in front of the fire in the depth of winter in the company of favorite writers, the act of reading requiring both quiet and comfort, one interior space supporting another. 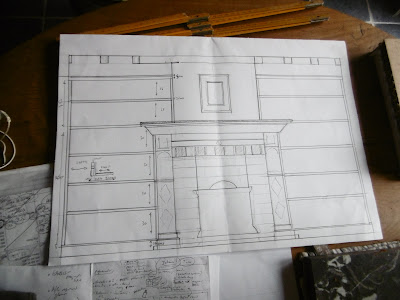 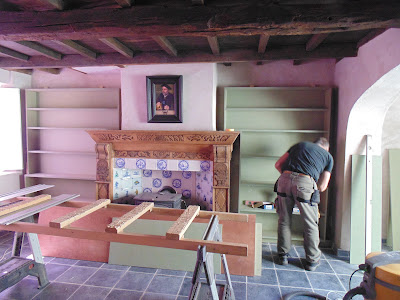 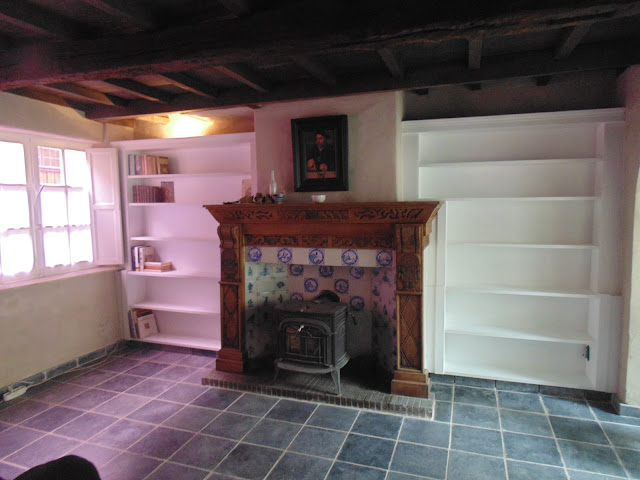 Upstairs I was finally able to give the new oak floorboards a stain of colour and coat beeswax This was physical hard work but one job at least that smelled nice - at least to my sense of smell. I first had to stain the boards to the right colour using a mixture of turpentine and burnt umber oil paint and then when this was dry a coat of of beeswax and turpentine. Finally the plinth was attached and painted white. 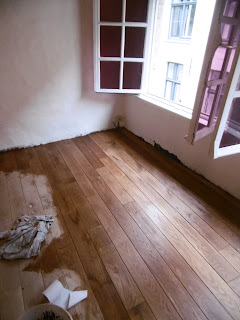 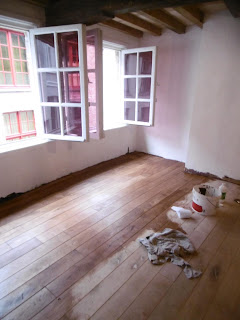 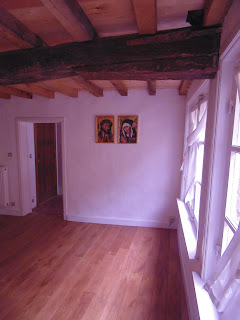 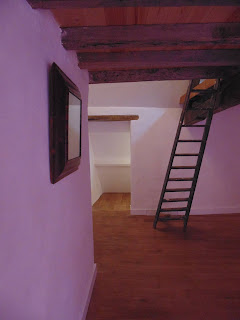 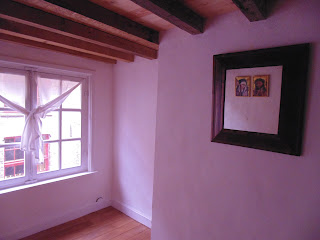 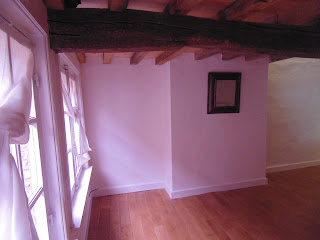 Posted by Alan Mitchell at 3:49 AM No comments: