Fratricide and Apocalypse in Brugge....

Saw Alessandro Scarlatti's 'Il Primo Omicidio' on Saturday evening at the Concertgebouw. Wow! What an extraordinarily powerful emotional musical dramatization of the biblical story of  Caine and Abel created as a focus for devotion in counter-reformation Venice.
http://www.concertgebouw.be/en/event/detail/1326/Concerto_Italiano
Lucifer had a beautiful seductive deep throated base voice whilst God was a rather high pitched, shrill disapproving counter-tenor. There were some wonderfully plaintiff and melodic arias and duets throughout by Adam and Eve and Caine and Abel, and despite being tired from physical work during the day the music had a buoyant energy in its vibrations that went directly into the central nervous system and fleshed out the narrative with very satisfying harmonic dialogue.
As a 'Bruggerling' I can visit for free the city museums and galleries and go often to Sint Jan's and the Groeningen to see paintings. Looking at the St. John's altarpiece by Hans Memling one is always struck by jewel-like richness and complexity of oil paint after so many years, its colour and light as well as the gentle modelling of forms and textures and the spatial qualities still fresh and startling in this amazing work.

The figure of St. John in the right hand panel can be interpreted on a number of levels. Represented seated on a rocky outcrop on the island of Patmos to the bottom right of the panel he gazes up to the sky illuminated with rainbows with the colours of the spectrum encircling the throne of God surrounded by Angels in the top left. Below this we can see the four horsemen of the Apocalypse riding diagonally across the surface from left to right.  This vision is made visible because the evangelist has transcribed it into words - we see him poised with his writing tool and his hand on the page ready to begin his work - and the artist has transcribed his words back into an image, the writer and the artist using words and images to convey a transcendent vision that lies beyond ordinary sight and outside of ordinary time.  'Et verbum caro factus est' like the incarnation itself both Van Eyck and Memling use paint to give flesh to the creative principle and to visibly embody the abstractions of  language, reason and inner vision.  The function of words and pictures as tools for channelling  the power of imagination and aesthetic pleasure into contemplation has never been better expressed by an artist than in this figure of St. John with his book and vision. Far from the nightmarish fears and anxieties the idea of  'apocalypse' suggests to our imaginations to Memling and to his figure of St. John the end of time is contemplated in a calm and reassuring vision of an ordered universe where good ultimately triumphs over evil in a delicate and delightful explosion of light and colour.

Posted by Alan Mitchell at 6:45 AM No comments:

Back from Berlin and the IB visual art workshop for the new syllabus given by Heather McReynolds who also works on the Inthinking visual art website for the IB and runs La Vigna Art Studios in Italy with her husband. 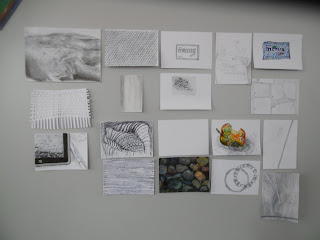 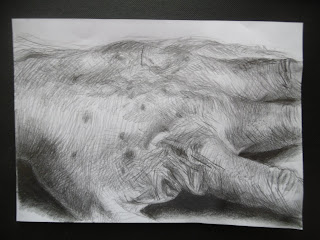 The drawing below was made on a piece of hotel notepaper for the 'curated exhibition' component exercise in the workshop. We were asked to make a drawing or study in another media within a small postcard size rectangle of any surface we liked that we encountered in and around the hotel. Listening to radio 4 later that evening I carefully studied the surface of the back of my hand with its wrinkles and blotches - increasing as the skin changes and ages. Viewed as simply another surface in the environment or a part of nature this aging process is quite interesting -even beautiful. When I see it as 'my' hand and identify with my own personal aging and decay I can feel quite emotional and disturbed by what I see.....

Along with meeting and sharing ideas and experiences with other international art teachers from various backgrounds I was also able to make a trip to the Gemaldegalerie on Saturday afternoon.  This vast gallery has extraordinarily rich holdings of Western art from the 13th century to about 1800 and was somewhat overwhelming. After you have wondered past several Italian Renaissance altarpieces of the finest quality by various great masters you start to get blase about them. Despite the scholarly art historical logic of the curated collection and the quality of the display and access for the visitor many of the works, especially those designed for devotional use in churches, felt displaced and de-contextualised by this kind of grand national museum collection, so large, so comfortable, secure and well lit, like a warehouse of cultural assets that sometimes felt like a collection of gold bars in a bank vault or a palatial rest home for elderly rich celebrities.

Three paintings in particular caught my eye, two of them quite small.  Cornelis  Bisshop' s interior with a jacket on a chair is full of implied presence and pictorial conceits about the frame and space, with its pictures inside a picture and its open door both revealing and hiding further intimacies from the viewer or rather voyeur who is being teased by this glimpse of a private space by the artist. The lobster and wine in the still-life painting, with its extravagantly guilt frame, and the silk jacket and shoes placed both on and next to the chair hint at sensual pleasures -is the room beyond a bedroom perhaps? What struck me more than this though was the way the painting is a savoring of time and space, capturing a moment when light falls onto various surfaces, wood, gold, silk, paint and plaster, articulating a warm domesticity.  The artist has created in the corner of a small room an entire world, radiating out from a cocoon of comforting familiarity, with both the anticipation of pleasure to come and reflection on pleasure past. Perhaps also the absence of a human figure hints at the transience of both fleeting pleasures and of life itself ?

By contrast Geertgen tot Sint Jans, John the Baptist in the Wilderness, contained in its small space suggests another kind of interiority. The saint's inward looking gaze, under the guardianship of the lamb's confident stare. contrasts with the open outward view he has turned his back on to contemplate the coming of his Saviour.  Far from being a wilderness the landscape is rich and verdant and filled with all kinds of flora and fauna including rabbits, a deer, birds, trees and flowers. In the far distance we also see the towers of a rich town or city with hills beyond. The saints gentle but pensive expression in both face and hands, his rather coy bare folded feet and simple clothes hint at both his devotion and austerity, the richness of a wilderness outside perhaps suggesting an inner life that is rich despite an outwardly poor life with its diet of wild honey and locusts, spiritual abundance in the midst of material poverty.
Whilst I was in Berlin I started to read Caroline Walker Bynum's 'Christian Materiality An Essay on Religion in Late Medieval Europe'. Discussing the curious phenomenon of relics, miraculous bleeding statues, healing images and other physical manifestation of the divine in material forms both in popular and officially sanctioned cults in the middle ages. She traces the contemporary theological and philosophical arguments about the incarnation, resurrection and transubstantiation and the seeming contradictions inherent in matter itself that could manifest apparent growth and decay as part of its natural processes yet miraculously defy these physical laws as in the liquifying blood of Saint Januarius in Naples or supernatural transformations of St. Francis' stigmata. How could dead matter be 'alive and kicking' at the same time. The protestant iconoclasts of the 16th century by chopping off the heads of statues and defacing pictures were paradoxically both denying and asserting the living, numinous power and presence in this 'dead matter'.

Giovanni Bellini's 'Resurrection of Christ', the last of the three paintings that caught my eye, seems to be an embodiment in paint and image of the issues the book explores. She says on page 285 as part of the conclusion

The paradox of fourteenth and fifteenth century devotion lies not only in the prevailing assumption that matter is essentially animate and labile. Nor is it merely the simultaneous assertion of the eternally unknowable and the this-worldly material. Rather, it is the assertion by miraculous matter itself of life in death, eternity in change, ever-living blood in  ever-decaying bread, wood, or bone.

Chapter one, 'visual matter', stresses the materiality of the painted or sculpted image as 'alive' or potent because of its connection with 'bodies' both human and divine, rather than simply functioning a sign, symbol or metaphor for the sacred. This interested me and recalled James Elkin's book 'What Painting Is' which uses the language of alchemy to discuss that thing most remote from art historians whose media is the abstraction of words - the physical stuff of paint itself.

Posted by Alan Mitchell at 10:18 AM No comments: