Walking in the Italian Alps and the English Lakes over the summer we naturally encountered many mountains and trees as well as islands and lakes whose triangular and circular geometry seemed to  align with the 'squared circle' or fourfold cycle of the seasons and the endless motion of elements, earth, air, wind, and fire constantly changing everything in time and space.

In addition to Gaston Bachelard's 'Poetics of Space' I have been reading Francis Pryor's book 'Seahenge' with its fascinating descriptions of his career in archeology and his insights into the civilisation of Neolithic Britain prior to the Roman conquest.

I am struck by his connection between the shape of the round house with its circle of post holes to support the roof structure, the passage entrance, the door lintels and central square hearth and the shape of the stone circles or henges which are found throughout Britain and Europe.

He has suggested that the shape of the stone circles is derived from the form of abandoned roundhouses whose remaining structures in decay became monumentalised in stone in part as an act of reverence to the ancestors who formally dwelled there. The houses of the dead therefore resembled the form of the houses of the living and the shape of the cosmos that could be observed all around them. There is a significant resemblance between for instance the Neolithic houses of Skara Brae and Maeshowe chambered cairn or tomb

'A circle is a simple, satisfying, all-encompassing shape that is straightforward to lay out on the ground'.

He goes on to quote Professor Richard Bradley who says in his book 'The significance of Monuments: On shaping of Human Experience in Neolithic and Bronze Age Europe'

'The idea of a circular or spherical cosmos....can carry an enormous weight of symbolism, it may originate in the experience of an individual inhabiting an increasingly open landscape. He or she is at the centre of the world which recedes towards the horizon, where the land meets the sky ... whatever their ultimate meaning, circular constructions reflect perception of space that extends outwards from the individual and upwards to the sky. The main fixed points on the land may be natural features like hills, while those in the sky are the sun and the moon, whose positions can be seen to change in relation to such landmarks. This may be why circular constructions are often subdivided according to the cardinal points of the compass, or why they often stand for a cycle in the human or natural worlds.'

Houses can clearly stand in symbolic relation to the cosmos as Paul Oliver suggests in his book 'Dwellings' citing examples like the Mongolian Yurt, The Navajo Hogan and the Tukanoan 'malocca' or community houses, saying,

'Through the myths and legends, ritual lore, epic songs and religious customs of a society, its values may be transmitted, communicated, repeated and learned. As the roof under which so much of this is acted and re-enacted in the daily, yearly and life cycles, the dwelling readily becomes the symbolic model of the greater universe of time and space in which they seem to exist'

The house in addition to representing the cosmos might also represent the body.

In his book 'English Houses 1300-1800 Vernacular Architecture, Social Life', Matthew Johnson adapts an illustration from Robert Blair St. George's book, 'Conversing by Signs: Poetics of Implication in Colonial New England Culture', which represents the house as a structure whose 'anatomy' corresponds to that of the human body, the rafters and beams corresponding to the bones, the heart to the hearth, the eyes to the windows, the chimney to the breast and so on........ 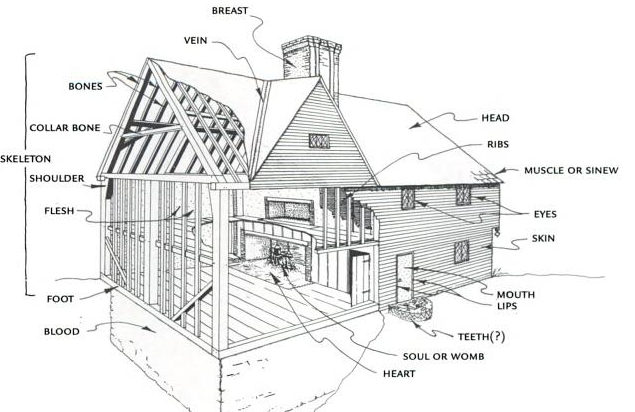 From a Buddhist point of view, like the residents of a house, 'we' only temporarily occupy the ever changing aggregates we cling to as a permanent 'self ' (form, feelings, perceptions, mental formations and consciousness)

As I begin the process of restoring an old house that was here long before I came along and will remain long after I am gone, it seems that the work of stripping back, repairing, salvaging and recycling the solid fabric of the building is really ultimately about framing the inner and outer worlds which are experienced through the body/mind and senses - light, colour, time and space - all the intangibles.......

The path to dwelling in well being here and now may be eight-fold and the ultimate refuge threefold.

Posted by Alan Mitchell at 11:28 AM No comments:

In Milan over the summer I was able to visit the Pinacoteca di Brera and the Pinacoteca Ambrosiana. Two paintings, one in each gallery, held my attention long enough for some thoughtful contemplation.

Caravaggio's 'Canestra di Frutta' of 1599 and Giovanni Bellini's 'Pieta' of 1460 are both paintings that seem to be negotiating the boundaries between, desire and loss, growth and decay, the living and dead, and the relationship between 'animate' and 'inanimate forms'.

The mutability of 'flesh' suggested by the worm holes in the apple in one painting and the wounds on the body in the other point to the inevitability of death tempered by the possibility of renewal, rebirth or resurrection in either organic or theological terms, depending on your point of view or beliefs. 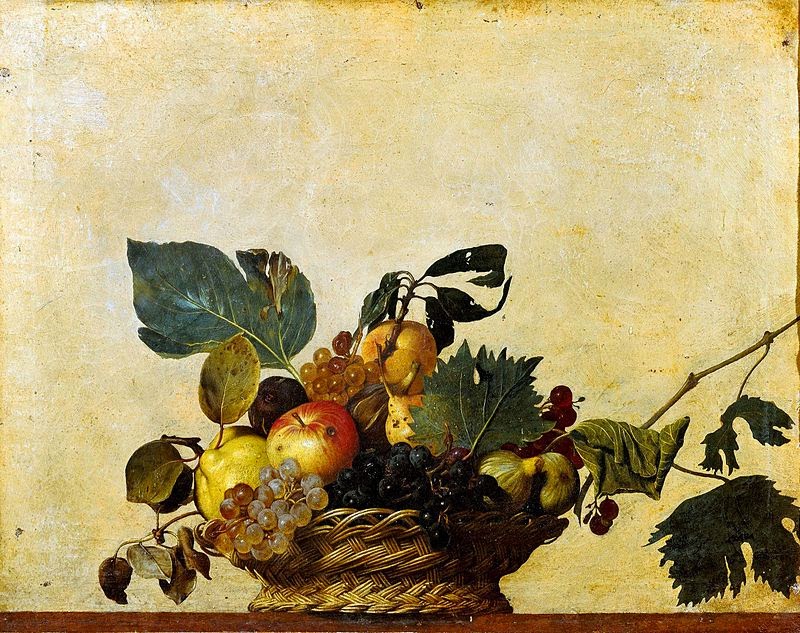 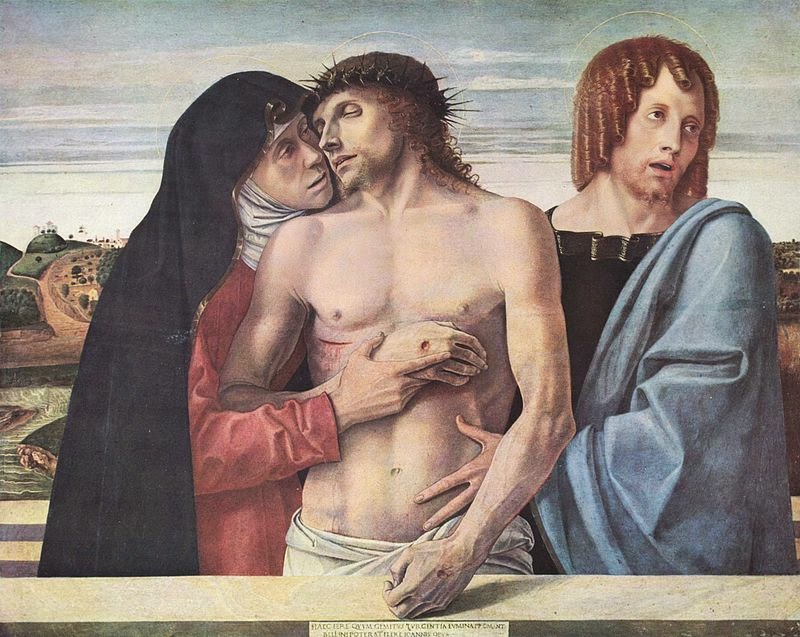 Caravaggio's  view of the basket of fruit, painted with such a precise and apparently objective realism in all its carefully modelled solidity is starkly contrasted with the uncompromising flat background and  total lack of foreshortening in the ledge, which is positioned at exactly eye level, unlike the same illusionistic device in Bellini's Pieta which even has a shadow from the hand receding across its surface.

Just as the fruit appears to have been captured at the moment when ripeness turns to decay, thus emphasising time and transience even while appearing to arrest it, the painting itself seems to have defied change and is as fresh and powerfully effective an image as when it was painted over 400 years ago - although this illusion is itself subject to decay.

Posted by Alan Mitchell at 10:35 AM No comments: