“It is dangerous to unmask images, since they dissimulate the fact that there is nothing behind them.”

“O the mind, mind has mountains; cliffs of fall

G. M Hopkins. ‘No worse there is none, pitched past pitch of grief.’ 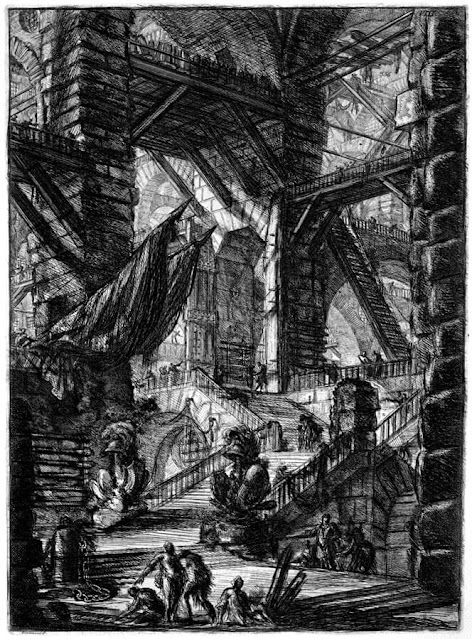 In Susanna Clark’s book ‘Piranesi’ (like his namesake the 18th century Roman engraver whose veduti of the Roman ruins and imaginative capriccios include his famous 'carceri’ or prisons, like the one illustrated above) the protagonist is adept at systematically mapping and cataloguing the rooms and tides of his lost world. He interprets and finds meaning and comfort in the iconography of the many statues that populate the halls and staircases of his otherwise almost deserted sea-swept and seemingly endless ruined palatial domain. Along with his journal, and the ambiguous ‘other’, who gives him occasional ‘gifts’ ( like, incongruously, a pair new training shoes) the generosity of the seemingly beneficent ‘house’ itself, gives him security and comfort. Even the occasionally treacherous high tides, which provide him with fish to eat, and the dangerous fallen ceilings and walls do little to dampen his devotion to this beautiful ruined domain and the bones of its mysterious former inhabitants, which Piranesi reverences with care and offerings.

Like Susanna Clark's previous book, ‘Jonathan Strange and Mr. Norrel’ she invites us into the lives of  characters who experience a not always benign parallel universe, lying adjacent to the ‘real’ world of the other characters in the fictional text itself. This other world can be accessed through mirrors, or other magic ‘doorways’ that open like the pages of a book. It’s a world where forgetting and remembering are keys to the creative imagination in which dreams and historical fantasy mingle to blur the boundaries of reality and illusion.

Whether by supernatural means, magic, primitive religion or perhaps hypnosis, psychosis or amnesia, we increasingly suspect that  Piranesi’s ‘condition’ might have a more prosaically scientific explanation. Might it be a form of schizophrenia, a bi-polar disorder or the early onset of Alzheimer’s, and could it be cured by chemical or psychological interventions?  He inhabits this imaginary world which is more real to him (and significantly to the others who have visited it, suggesting a collective experience ) than the ‘real’ world of ‘police stations’ or ‘Manchester’, which simply do not exist in his memory or experience.  What are we to make of this parallel universe which seems so solid and real to our character and yet so insubstantial to us?   We need a paradigm shift in thinking, something like quantum physics, to allow us to see or believe this reality, or to suspend our disbelief. The magic mirror, door to the divine, window into a lost world or secret garden is of course art. The creative imagination expanded into stories or pictures allows other worlds akin to our own to exist, at least in our personal or shared collective imagination. 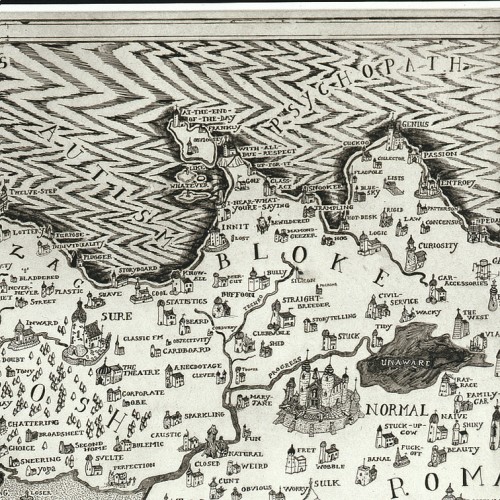 Detail from Grayson Perry's ' Map of an Englishman's Mind.

‘So you are confident that parallel worlds are conceivable’, says Bole. More zan conceivable, dear Benedict, zey are likely, if you subscribe as I do, to ze multiwerse- and more particularly, to membrane theory. Multiple membranes, each a uniwerse in its own right, float in high dimensions. If zey collide, which is very rare, you may get a big bang, or something like it.’  Bole has studied the subject long and hard. He worries that Dr Flasche’s theoretical brilliance might not match the need for practical application. ‘I offer a variation,’ he say. ‘Two membranes are joined at one tiny point. A cross dimensional bridge occurs, the effect of a cosmic collision long ago. They share time but not place.’ 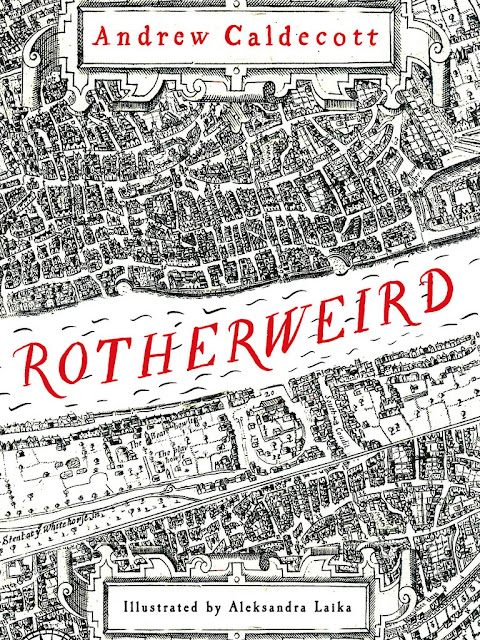 Art, religion, science, history, memory, dreams and imagination can give rebirth (Renaissance) to a collective fantasy of the past, ancient Rome or a medieval Bruges, in an historical reconstruction or virtual reality whether in architecture, painting, sculpture or film.  As Simon Sharma says in an article in the NYT about his book 'Landscape and Memory', in which explores the topography of cultural identity, 'Arcadia has always been a pretty lie' . 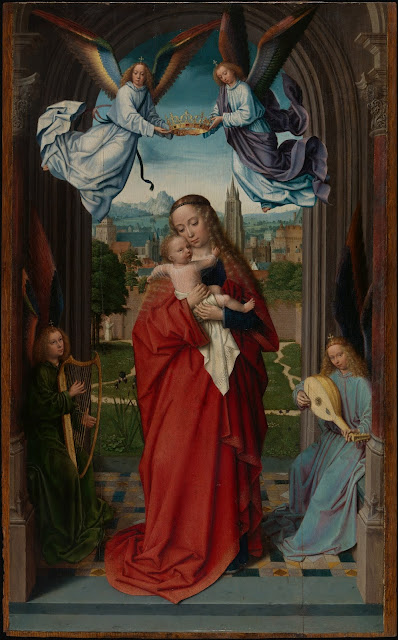 In David Gerard’s painting of the Virgin and Child with Four Angels 1510-15, now in the Metropolitan Museum  https://www.metmuseum.org/art/collection/search/436102 We are invited into both a real and imaginary world connected to each other through the trompe l’oeil illusion of an architectural door frame, flanked by columns with capitals in an Italian style, and further enclosed, no doubt, by the actual physical sculpted frame that protects the painting and presents a ‘window to the past’, as it were, from the wall of the museum. Through the doorway and beyond the figure of the virgin and child and the angels, those below playing musical instruments and those hovering above holding the hollow circle of her crown, we see a contemporary early 16th century view of the city. We can recognise the familiar spire of the Onze Lieve Vrouw Kirk and the shorter, at that time, Cathedral tower or perhaps the Sint Donatus Kirk, which no longer exists, as well as the distinctive Flemish pitched rooftops of the city. A Carthusian monk is seen strolling and reading in the enclosed garden, suggesting that the painting was linked to the former monastery at Genadedael, just outside the city walls of Bruges opposite the Kruispoort. On this site now there is new housing and no trace of the old charterhouse except in the name of the road, Kartuizenstraat.  Less familiar are the rocky mountains rising up in the distance, in what we know to be the very flat Flemish polders. 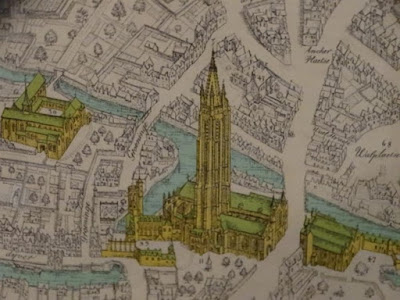 What are we to make of this strange and beautiful, dreamlike mixture of real and imaginary worlds, both human and divine in this very Flemish form of ‘magic realism’?

‘Ayres Rock’ ( named after Sir Henry Ayres, the chief Secretary of New South Wales by European colonialists in the 1870s)  or ‘Uluru’ was and is to the native Australian Anangu, who are the traditional landowners, a repository of cultural collective memory, a key locus of meaning, remembered in narratives and images from the dreamtime, and inhabited by the spirits of the ancestral creator beings. The different perceptions and priorities of native and colonial peoples have often clashed around what is visible to the outer eye and the 'parallel universe’ which only the inner eye can see.

Like Lucy, in C. S. Lewis' Chronicles of Narnia, who is met initially with disbelief by her siblings, we can only pass through the magical wardrobe to the world beyond with the enchanted eye of childlike belief. This conflict between rational reality and the world of the imagination is also central to H. G. Wells short story 'The Door in the Wall', in which the central protagonist's choice to re-enter through the door to the lost world he remembers from his childhood is repeatedly postponed throughout his life until he finally, critically decides to make that choice - with fatal consequences.

Christian Marclay’s ‘The Clock’, a 24 hour montage of film clips in which a timepiece always appears synchronized to real time, is both an homage to cinema and a memento mori. We have the impression that time is elastic, expanding and contracting to accommodate our emotional ‘inscape’ as we are drawn into each narrative episode and its psychological drama. Like an elastic band it can change size without altering its actual dimensions. Time and space are perceived realities in which impressions can over-ride logic to give the illusion of truth. 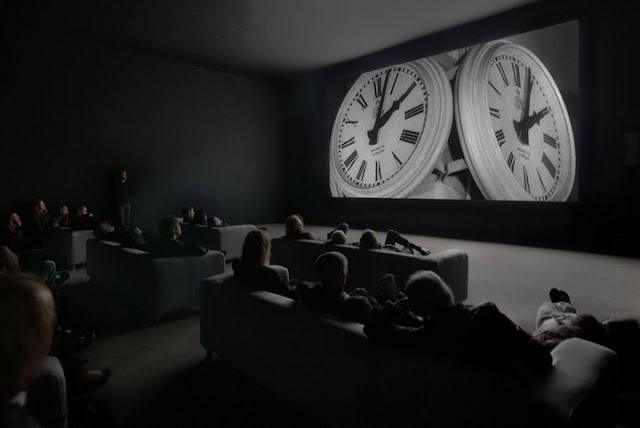 Relative and absolute time and space, like parallel universes, kaleidoscope into the present moment. Here at the still point in the centre of an ever turning circle is the place were both mundane and supramundane worlds meet in the mind and consciousness of the individual and the cosmos. This point is clearly real, the basis of a dimensional reality, in which line and circle connect to create all geometric forms, and yet it is simultaneously without dimension, is 'no thing', ultimately mysterious and unknowable. 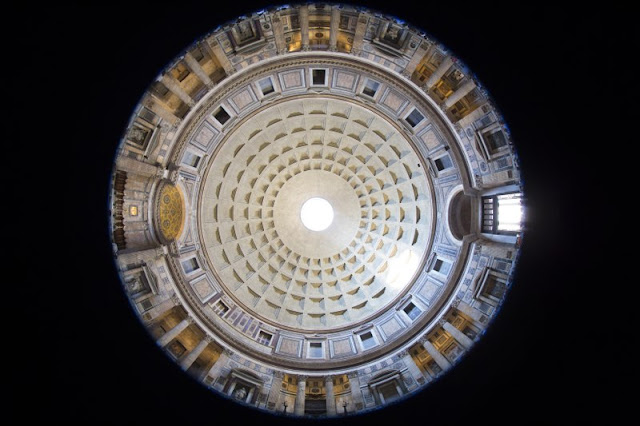 The oculus and dome of the Pantheon, Rome