Just taken down the work from the exhibition made with colleagues at school as part of the Waterloo Parcours d' Artistes. It is always delightful to discover that particular works in very different media resonate with related or corresponding themes or concerns and individual internal quiet reflection and contemplation supplemented by critical discussion with students over time helps one to gradually apprehend the initially invisible fine capillary connections, or neurological pathways toward meaning, that the works makes in the mind of the viewer who makes an effort to understand.

So much of this meaning depends on the medium and the context of the space which includes the plinth or the frame as well as the gallery. Michelle Cornez's black burnt out burnt seed pods or hatched egg like structures with their white crackled glazed skins suggest something mysterious that has just been born or just died, an organic or biological life and death cycle that has fused the metamorphoses of earth, air, fire and water into something fixed and permanent enough for us to contemplate.

My own work both in the elegiac autumnal landscape with it's panoramic horizontal and vertical geometry and long evening shadows suggests the cyclical nature time and the small oil paintings from the fugitive image series are a homage, if you like, to the transience of paper and the image itself, which ironically is 'frozen' in an artistic form, an illusion of stable unchanging reality created to staunch the inevitability of change yet subject to the same three marks of existence, 'anicca', 'anatta', 'dukkha'. 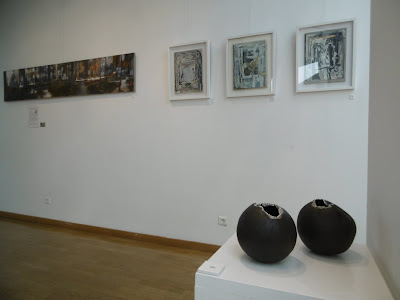 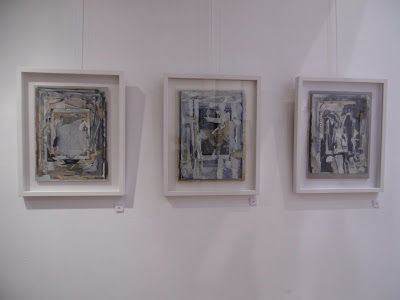 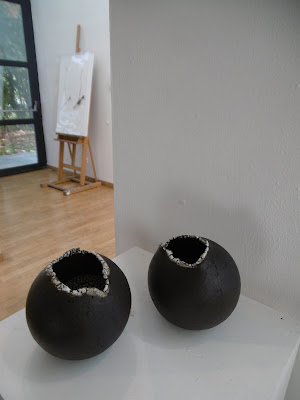 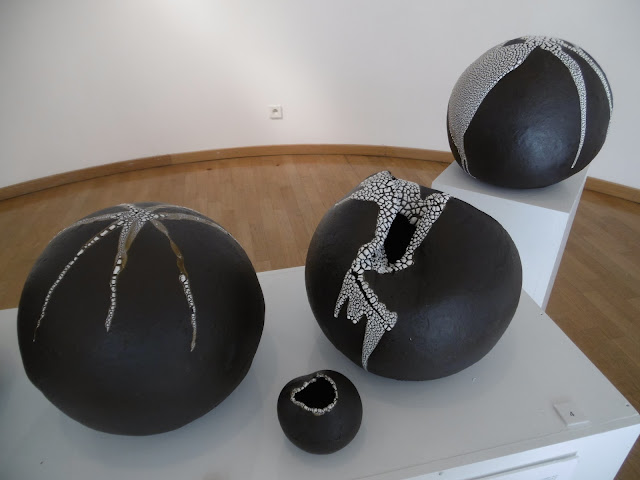 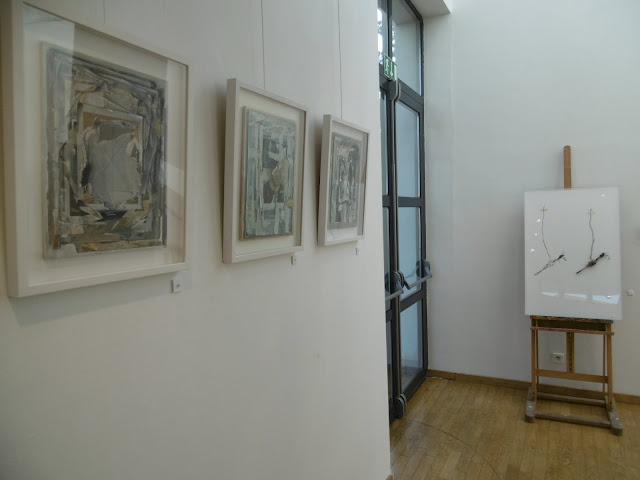 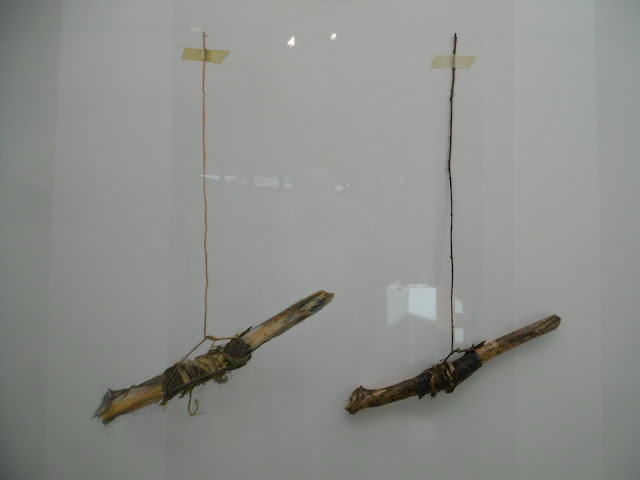 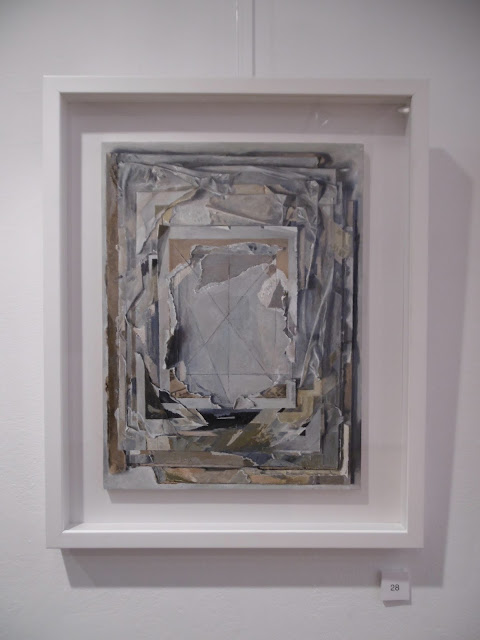 Posted by Alan Mitchell at 1:19 AM No comments: 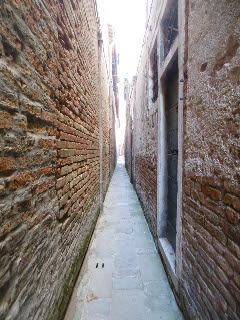 Just back from the Venice with the school trip for biennale exhibition, this year curated by Nigerian born Okwui Enwezor. We visited various venues including the national pavilions of the Giardini, the renovated shipyards of the Arsenale and Corderie and collateral events throughout the city including the Academia to see the collection of historical Venetian painting from the middle ages to the 17th century as well as the Peggy Guggenheim Museum’s collection of modern art and the Thyssen Bornemisza contemporary art collection and exhibition at the restored Palazzo Grassi and Punta della Dogana

The title ‘All the Worlds Futures’ encompassed a vast array of exhibitions, topics and themes many of which were thought provoking, challenging and powerful and gave a deep insight into current global social, cultural and political situations as well as posing timeless existential questions.

What is unique about the Venice Biennale is the way the present is framed by the past. The historical city has been a cradle of world civilisation, a meeting of East and West, in both Byzantine and Ottoman empires and a crucible of mercantile capitalism, at its height with a powerful mediterranean maritime empire and a form of democratic republic governed by an aristocratic oligarchy, that made Venice rich and independent through trade secured through diplomacy and war.

This historical context provided a contrast for contemporary artists to explore current global issues and extrapolate meanings in relation to the present and future.  The city’s extraordinary infrastructure and the temporary exhibitions housed in national pavilions specially built for the biennale as well as many  historic architectural spaces, explored both by vaporetti along the canals and on foot in the many narrow passageways, thus acts as a  sort of labyrinth which can be ‘read’ as a cipher for our own times. Venice is like a giant shiny bauble of both desire and loss that reflects the many contradictory facets of the world, past, present and future in its glittering surface.

Shakespeare’s tragedies, The Merchant of Venice and Othello, help us to see the city and its Black and Jewish identities through the eyes of the 16th century playwright as an early modern melting pot of religious, social, cultural and ethnic differences were prejudice was rife, intrigue and jealousy could thwart ambition and justice could be either harsh or tempered by mercy
We still see the crumbling palazzi that flank the grand canal through the eyes of artists like Canaletto or Pietro Longhi who created souvenirs for the 18th century aristocratic grand tourists  or  through the hazy sunlit mists of romantic 19th century artists like Turner or writers like Ruskin who, in his ‘Stones of Venice’, helped to create the modern vision of Venice as a threatened artistic heritage needing to be saved for posterity or Thomas Mann, whose Belle Epoch city is doomed and decadent and full of beauty and death.

Venice in myth and reality represents both a giant ‘collective unconscious’ imaginative place as well as a very real ‘momento mori’, challenging our own current culture's complacency about sustaining both built and natural environments in response to apocalyptic scientific climate change predictions. Set amid the rising waters of the lagoon that once guaranteed Venice’s security, keeping both historic enemies and the modern world at a safe distance, it now threatens to drown the sinking city both literally and metaphorically in the vast global currents of popular tourism, on which ironically it depends for survival, as gradually the locals migrate away to the mainland. 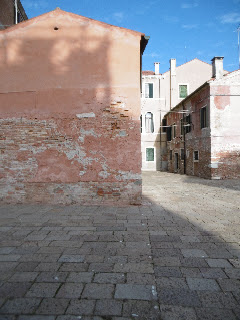 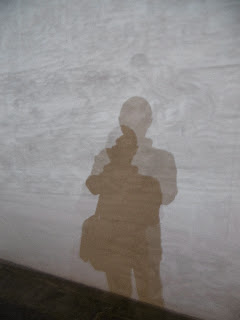 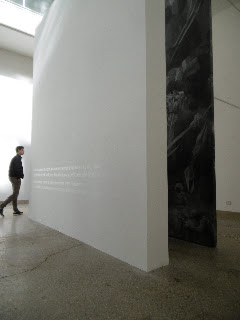 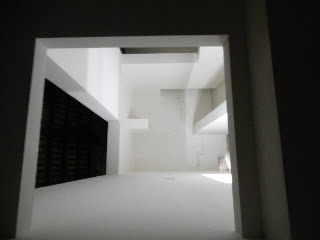 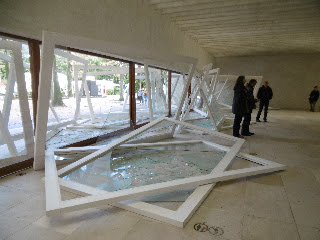 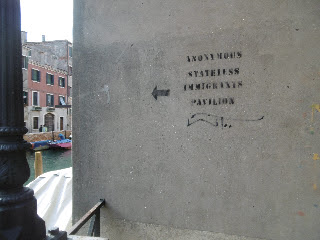 Posted by Alan Mitchell at 12:41 AM No comments:

An Art of Emptiness?

So emptiness isn't getting rid of anything; its not total blankness, but an infinite potential for creation to arise and to pass without your being deluded by it. The idea of me as a creator, my artistic talents, expressing myself-it's an incredibly egotistical trip, isn't it ? "This is what I've done, this is mine". they say, "Oh, you're very skilled, aren't you? "You're a genius!" Yet so much of creative art tends to be regurgitations of people's fears and desires. It's not really creative; its just recreating things. It's not coming from an empty mind, but from an ego, which has no real message to give other than that it's full of death and selfishness. On a universal level is has no real message other than " Look at me!" as a person, as an ego. Yet the empty mind has infinite potential for creation. One doesn't think of creating things; but creation can be done with no self and nobody doing it - it happens.

Mindfulness: The Path to the Deathless. The meditation teaching of Ajahn Sumedho

When painting, one should sit cross-legged with loosened clothing, as if no one were around. Only then will one hold the powers of metamorphoses in one's hand and the yuan- ch'i (primal breath) will abound. Unfettered by earlier masters, one will then be able to roam beyond the established rules. Shoup'ing inscribed

Posted by Alan Mitchell at 1:17 AM No comments: