The Mirror and the Mask

When I  came upon the diary it was lying at the bottom of a rather battered red cardboard box, in which as a small boy I kept my Eton collars. Someone, probably my mother, had filled it with treasures dating from those days. There were two dry, empty sea-urchins; two rusty magnets, a large one and a small one, which had almost lost their magnetism; some negatives rolled up in a tight coil; some stumps of sealing wax; a small combination lock with three rows of letters; a twist of very fine whipcord, and one or two ambiguous objects, pieces of things, of which the use was not at once apparent:I could not tell what they belonged to. The relics were not exactly dirty nor were they quite clean, they had the patina of age; and as I handled them, for the first time for over fifty years, a recollection of what each had meant to me came back, faint as the magnets power to draw, but as perceptible. Something came and went up between us: the intimate pleasure of recognition, the almost mystical thrill of early ownership- feelings of which, at sixty-odd, I felt ashamed.

Nostalgia:noun. /nəˈstældʒə/ , /nɑˈstældʒə/ [uncountable] a feeling of sadness mixed with pleasure and affection when you think of happy times in the past a sense/wave/pang of nostalgia (definition in Oxford English dictionary)
A fragment of ivory silk with trailing threads reflecting the pale light of an autumn afternoon, some dried yellowed leaves showing their skeletal veins, a stray piece of torn paper with an incomplete phrase of dislocated words, the scuffed or broken gilded plaster molding reflecting pale fire or the glimpse of a segment of blue sky and white billowing clouds framed against rooftops or red tiled eves ignites a small epiphany, like Proust’s famous Madeleine. The heart/mind latches on to these fleeting sensory moments when something interior aligns itself to some exterior stimulus and the process of perception, memory and imagination creates a series of associations between art and life that open a space of contemplation in which the transcendent is immanent. We are transported to another dimension without leaving this one through the door of the mind and the senses - an embodied rather than out-of-body experience- an 'incarnation'. Within this enclosed interior space there is paradoxically a window into infinity  Within the ordinary and even banal snatches of everyday reality a door opens to an augmented consciousness.

The examples below are works in progress- everything in the larger images is painted in acrylic underneath with later oil paint 'interventions' on top although it gives the illusion of collage. The smaller images below are still experimental half collage/half paint with the two bottom ones entirely in a fluid state of collage. 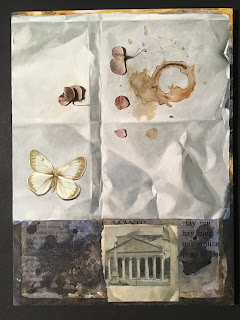 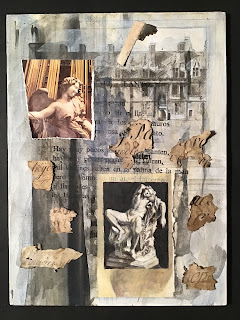 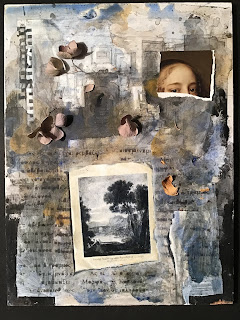 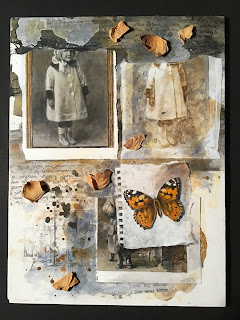 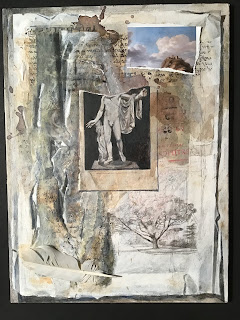 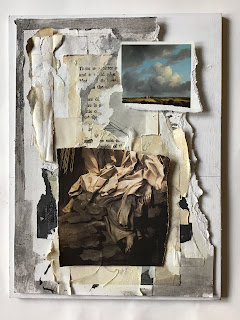 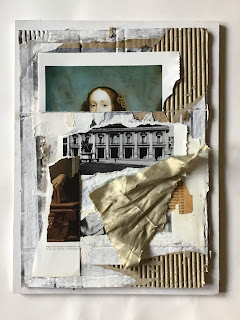 'The Mirror and the Mask' would be perhaps a good title for an exhibition of these and around 5-10 more paintings I am working to be completed by the summer. The mirror can be a metaphor for painting/photography as it reflects reality through an illusion and the mask both hides the outer appearance, self or reality and reveals or projects another inner hidden one and involves trance like states, make believe or dreamworlds..........


Over the summer I spent a week in Florence in a hands-on workshop with the restorer Chiara Mignani      //www.florenceart.net/restoration/     learning about cleaning and restoring oil paintings on canvas. The aesthetic qualities of multi-layered surfaces which have been damaged and restored over time and the interventions of the present day with its new technologies into the fragile material body of an art work creates a heightened sense of the beauty and transience of material forms. These are also qualities I want to capture both in the process and final outcome of my own original paintings, which are themselves often initiated, worked on and then abandoned for several years before I 'rediscover' them and make further interventions into the existing layers, bringing out new and altered interpretations in response to earlier ideas and marks. These 'traces' reveal perceptual shifts over time like the facade of an old house that has many times had windows and doors opened up, bricked up, and then plastered over before being stripped and remodeled again in the present day. 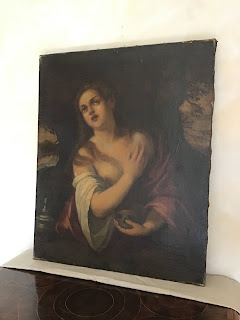 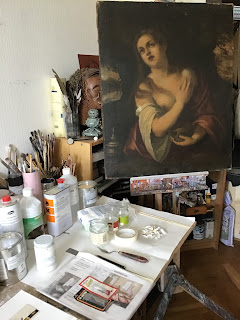 On the subject of Madeleines....In Florence I found what is possibly an 18th century painting in a 17th century style to work on. Clearly it is derived from more famous earlier examples of the same subject by Titian, Guido Reni, Artemisia Gentileschi or  Elisabetta Sirani  It was a very dirty penitent Magdalene with an old relining but in relatively good condition despite a thick layer of yellow dirt which I suppose comes from both aging varnish and possibly years of tobacco smoke and domestic dust and pollution.  Using experimental mixtures of synthetic saliva, tween and Emulsione di Certosa in various phases I have managed to clean the surface without damaging the paint. The next stage is to consolidate the edges and fill some tiny losses of paint and then to give a protective coat of mastic varnish before carefully retouching with varnish paint designed for restoration in some small areas. Finally I will fit a new 17th century style frame.

The subject was a favorite of Baroque artists. This image combining death and desire, the sacred and profane, philosophical reflections and theatrical forms with Caravaggesque contrasts between light and shadow gave great creative and imaginative scope to artists within the format. The iconography of the cave, the skull, and the ointment jar, alluding to the biblical narrative, and the interior of the cave, with its intimate space bringing us up close to intense emotion of the face, contrasts with the distant mountainous landscape seen through the cave opening, framed by roots, branches and leaves, on either side of the figure. The spiraling vortex of the figure itself, half hiding and revealing the body in white and red robes, describes an asymmetrical cone of movement upwards along with the direction of the gaze, expressing a tension between both stability and dynamism as well as the complex, conflicted emotions of the Magdalene herself. Perhaps this tells us more about the painter and his/her intended audience between the 16th and 18th centuries in Italy than it does about the real or mythical character of Mary Magdalene as she appears in the biblical texts or traditional interpretations. 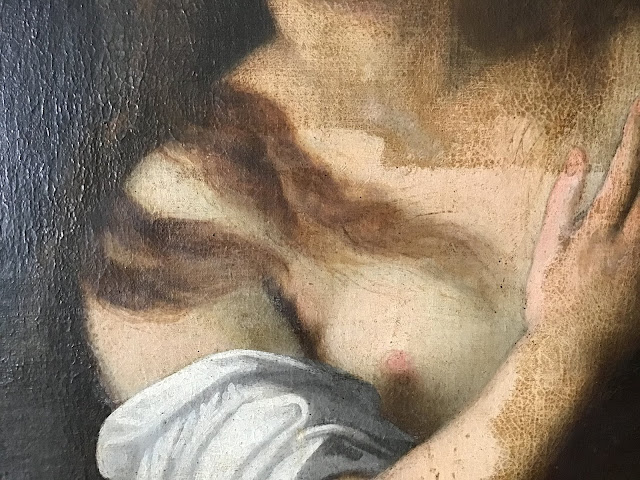 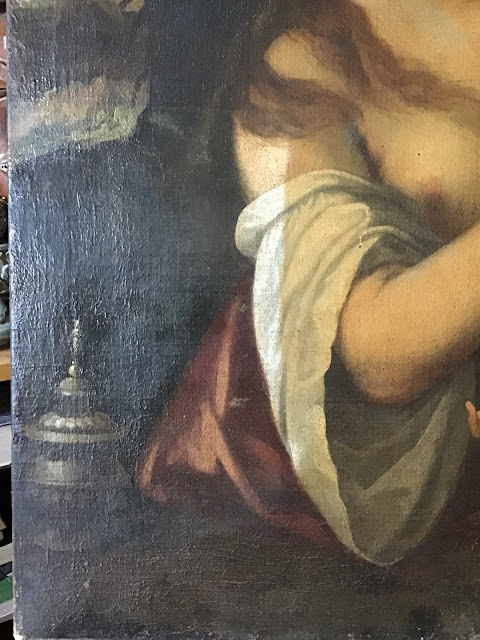 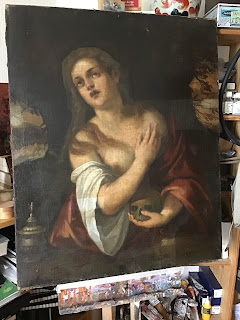 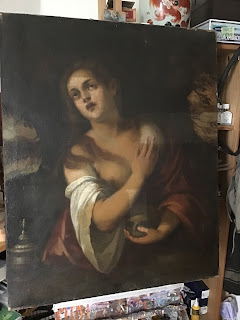 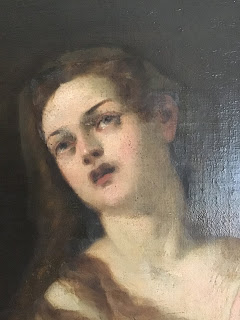 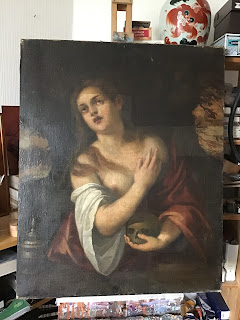 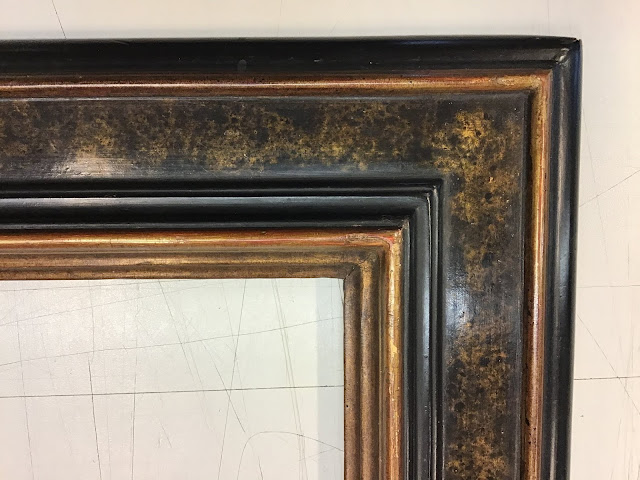 Posted by Alan Mitchell at 11:42 PM No comments: