Going round in circles

Travelling back to the North of England always involves travelling back to a remembered chidhood but from an new older perspective, back to the future, like the salmon that swim up the River Lune passing Sunderland Point on the way, the semi-isolated tidal community where ancient haaf netting, which dates back to the Vikings, is still practised by the locals to catch the fish as they head upstream. In the early 18th century, as the port for Lancaster, it was also a staging post in the transatlantic slave trade, making the round trip between the West Indies and North America, as the grave of a black cabin boy who died in 1736 after arriving on shore testifies to.

I feel no conflict between a European and/or British identity any more than I feel a conflict between a Lancastrian and/or English identity all of which are relative states arising dependent on causes and conditions. Setting up a conflict between this duality is engaging in a false dichotomy. Are the swallows that winter in Africa and return in summer to breeding grounds in the British Isles, 'African' or 'British'?  Is expecting someone or something to be one or the other 'identity' part of the problem, as Amin Malouf, the Lebanese born Christian who writes in French but whose native language is Arabic, says in his book 'Les Identites Meurtrieres' (deadly identities)? 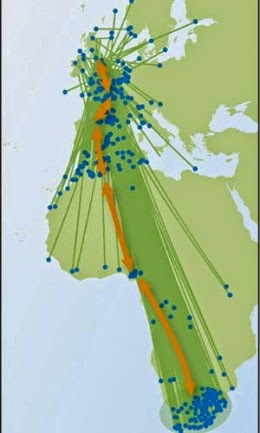 A map from the BBC showing the route
taken by tracked Swallows in 2009.
Source: www.bbc.co.uk

I don't see my identity as much different to that of 'H20' in the water cycle involving evaporation, condensation and precipitation moving between vapour, solid and liquid forms as the ice and snow that freezes on the mountain tops melts into stream, rivers, waterfalls and lakes and returns to the sea passing through many other conditioned phenomena on the way, including people. The names we attach to these various states of constant flux, 'Helvellyn', 'Aira Force', 'Lake Windermere', are just that, names or signs, useful conventions not permanent 'essences' or ultimate realities

Looking forward to seeing the new Mike Leigh film about J.M.W. Turner (a British, French German co-production) which premiered at the Cannes film festival in May.

The politics of identity, whilst being a matter of life and death for many in certain contexts, seem no more solid and lasting than the mirage of 'tinted steam, so evanescent and airy'  (Constable's description of Turner's paint technique) that dissolves in sunlight like the pale water-colours in Turner's sketchbooks of Venice, no more substantial than a perfume, a fleeting mirrored reflection of the ever-changing effects of light and colour both on the eye and in the emotions.

Turner conjures a vision of the human condition, powerless before the beauty and horror of the visual world and creative and destructive power of nature, in which earth and air, fire and water seem to be in costant flux, evaporating, coagulating and shifting between solid and liquid states like the paint itself.

His elemental and dream like evocations of ever changing atmospheres are similar to the classical Chinese lanscape painter's preoccupation with the 'respiration' of mountains, clouds and man himself. This resonates with the first of the four meditations in the Satipatthana Sutta, on the body or 'Kayanupassana'  which starts with Anapannasati or mindfulness of breathing and proceeds through the postures, bodily functions and 32 parts of the body to mindfulness of the four great elements, their arising and cessation both inside and outside the body.


"Furthermore...just as a skilled butcher or his apprentice, having killed a cow,
would sit at a crossroads cutting it up into pieces, the monk contemplates this
very body — however it stands, however it is disposed — in terms of
properties: 'In this body there is the earth property, the liquid property, the fire
property, & the wind property.'

Joseph Mallord William Turner, the son of a London barber and wigmaker, who retained a cockney accent all his life, is widely regarded as a British national treasure and the 'best loved' and greatest native artistic genius at a key moment when a distinctive  modern British identity was being forged in the late 18th and early 19th century.

Nurtured by the Royal Academy, founded in 1768 and based on traditional continental art forms derived ultimately from classical antiquity and the Renaissance, he articulates a romantic vision of Europe bathed in the golden light of a faded classical past influenced by the landscape tradition of Poussin and Claude Lorraine in an elemental maelstrom of light and colour with an innovative use of water-colour and oil paint. 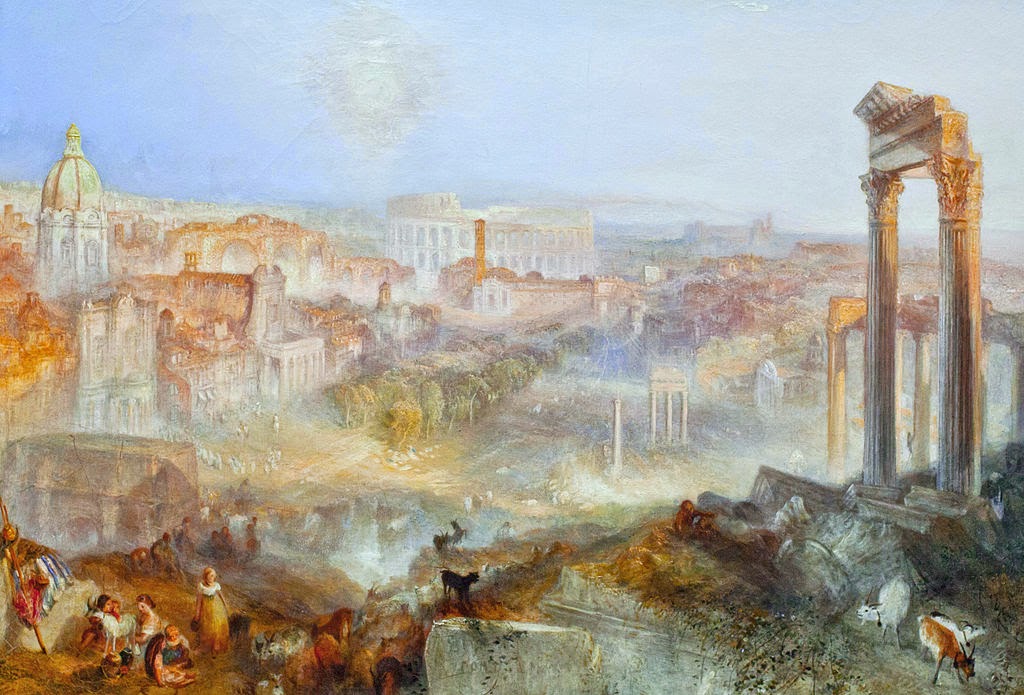 Like Goethe, whose colour theory significantly influenced him, Turner travelled widely in Europe including  Belgium, Germany, France, Switzerland and Italy. This greatest of British artists seems to have transcended boundaries and derived his inspiration and influence from beyond and outside the limited national traditions of his day even as he was nurtured by and re-defined them.  Byron's alter ego, the hero of Childe Harold's Pilgrimage, inspired another of Turner' great paintings of Italy, as well as a generation of wealthy world weary exiles, both real and imaginary, who made the pilgrimage to Italy on The Grand Tour.  Turner was not above alluding to the darker side of the century, presaging the changes brought about by the industrial revolution and expressing moral outrage at the transatlantic slave trade in painting like 'The Slave Ship' of 1840.

Back in Preston last week I was able to finalize the sabbatical project this year by bringing closure to three modules of the MA in Fine Art Studio Practice and see the BA Fine Art degree show at Uclan.  I was interested to discuss and see the catalogue of 'Rheinwarts' with Pete Clark who made a series of works with George Gartz in 2007 when they traced Turner's  journey along the Rhine in the footsteps of Lord Byron.

All of these journeys appear to be about being someone, going somewhere, in search of something. Director Tsai Ming-liang's 'A Monk From The Tang Dynasty' was a piece of minimalist theatre, which we saw on the 4th of May, which seemed more concerned with being nobody, going nowhere, in a journey where nothing is gained and nothing is lost.

Xuanzang was the 7th century monk who travelled from China to India on a pilgrimage to the great Buddhist sites of the Middle Land returning 17 years later loaded with Buddha Rupas and Suttas, a journey which Sally Hovey Wiggins describes in greater detail in her accessible book 'Xuanzang A Buddhist Pilgrim on the Silk Route'

Performed in the semi derelict 'wabi sabi' setting of the Cinema Marivaux in Brussels, as part of the www.kuntenfestivaldesarts.be, the performance was as much a meditation as a spectacle, and demanding for the viewer who had to watch patiently as the actor playing Xuanzang slowly unfolded various actions and gestures representing mindfulness of the body, including processes of breathing, sleeping, walking, and eating.

The most remarkable part of the performance was when another actor slowly covering the large sheet of white paper which formed the ground of the 'stage' by drawing in charcoal around the sleeping figure of the robed monk revealing his shape as an empty space when he finally awoke and stood up, reminding me of how Andy Goldsworthy has done similar things with his own body's 'shadow' and rain. 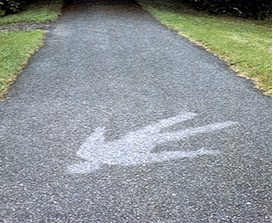 Like the ruins of the Roman Forum, the ruins of the university of Nalanda, which was already seven centuries old when Xuanzang stayed there as the honoured guest of his master the Ven. Silabhadra in the 7th century, are just as evocative now.

The exhibition 'The Fugitive Image' in May which included a selection of old and new work also marks the end of a cycle in this particular journey with the set of ten new paintings in this series framed and displayed against the very complementary wall colour of Kaoru's luminous space and the chance to share and discuss ideas with visitors over the course of the weekend and see how they responded to the work. 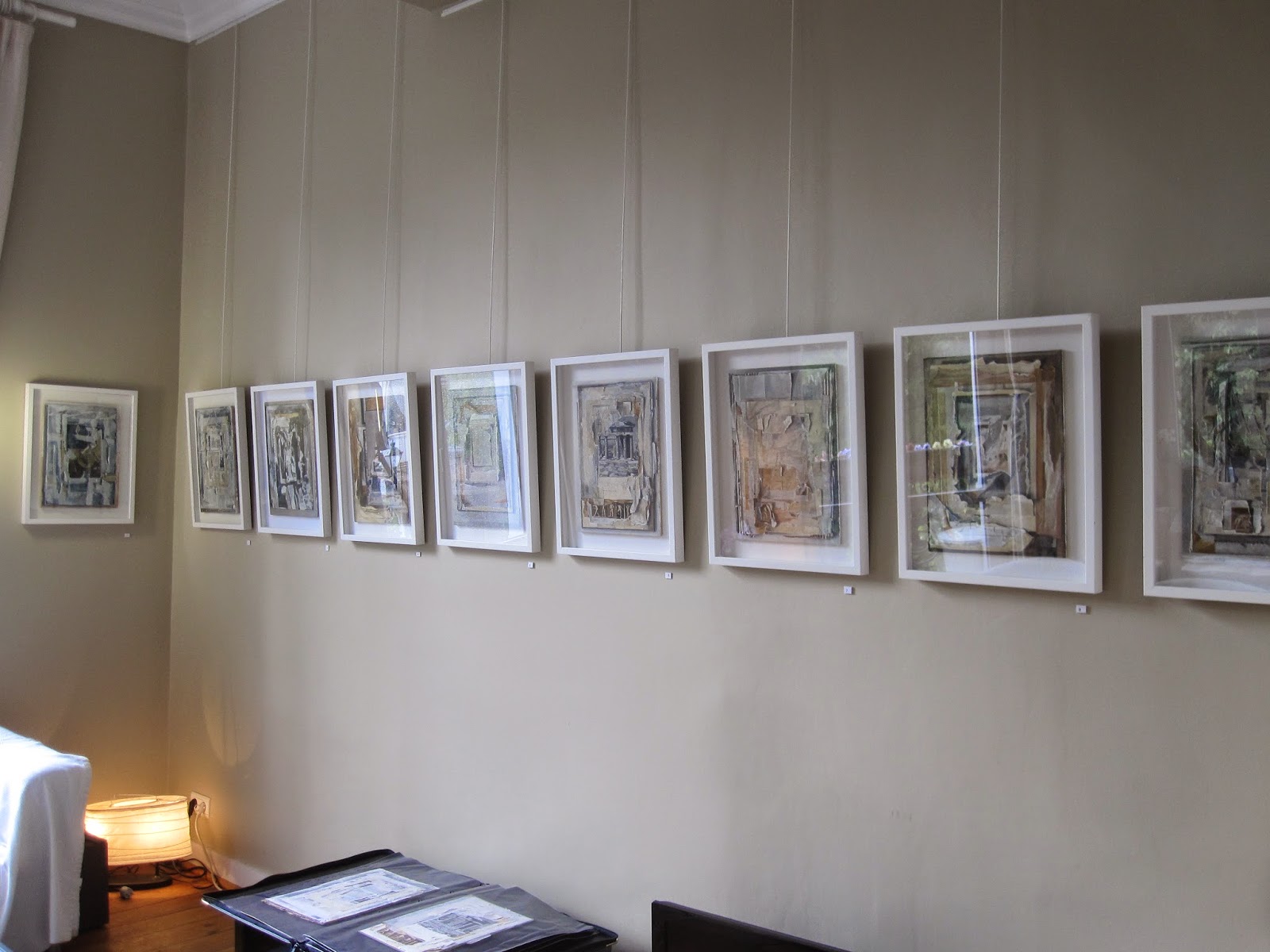 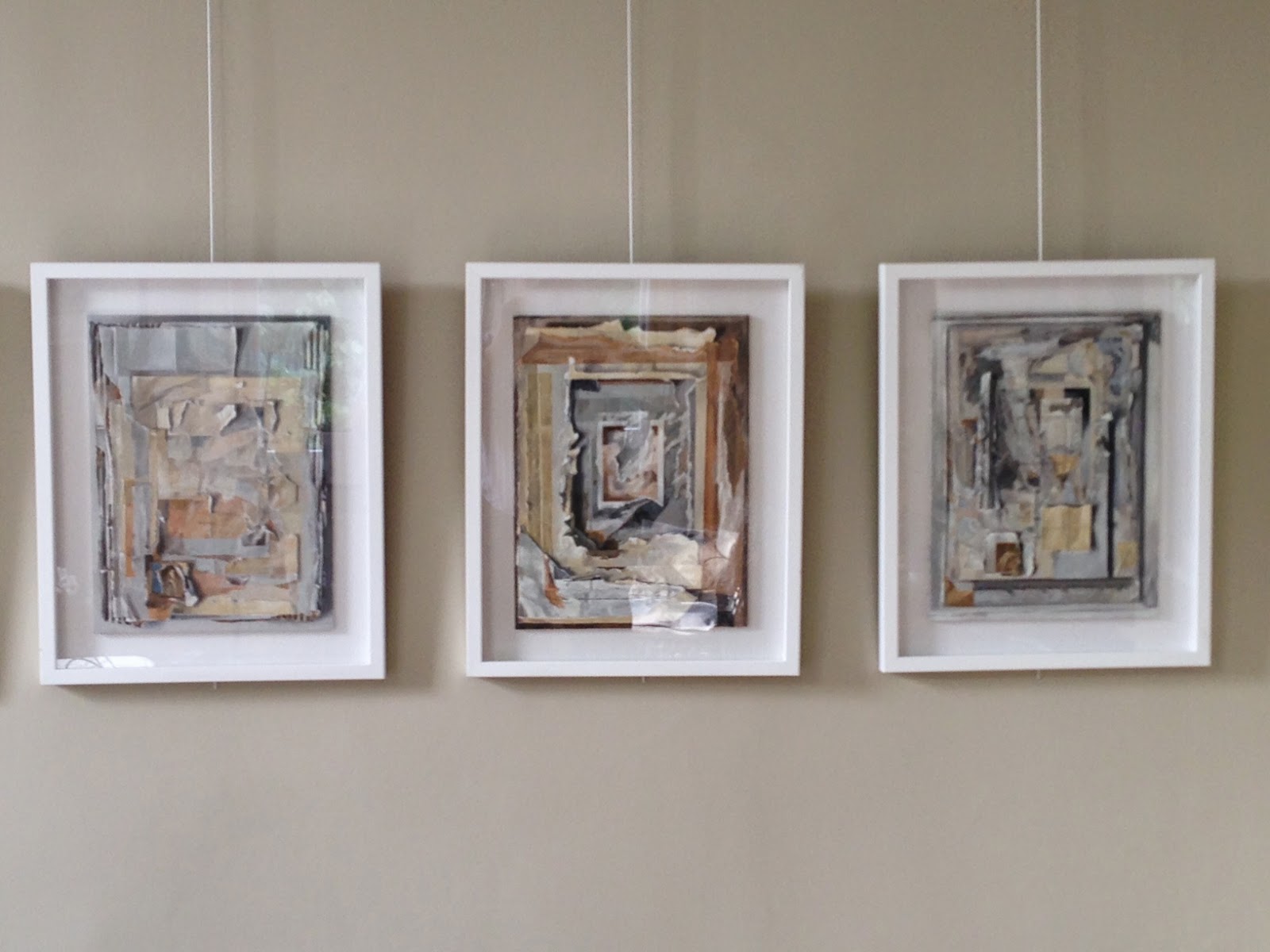 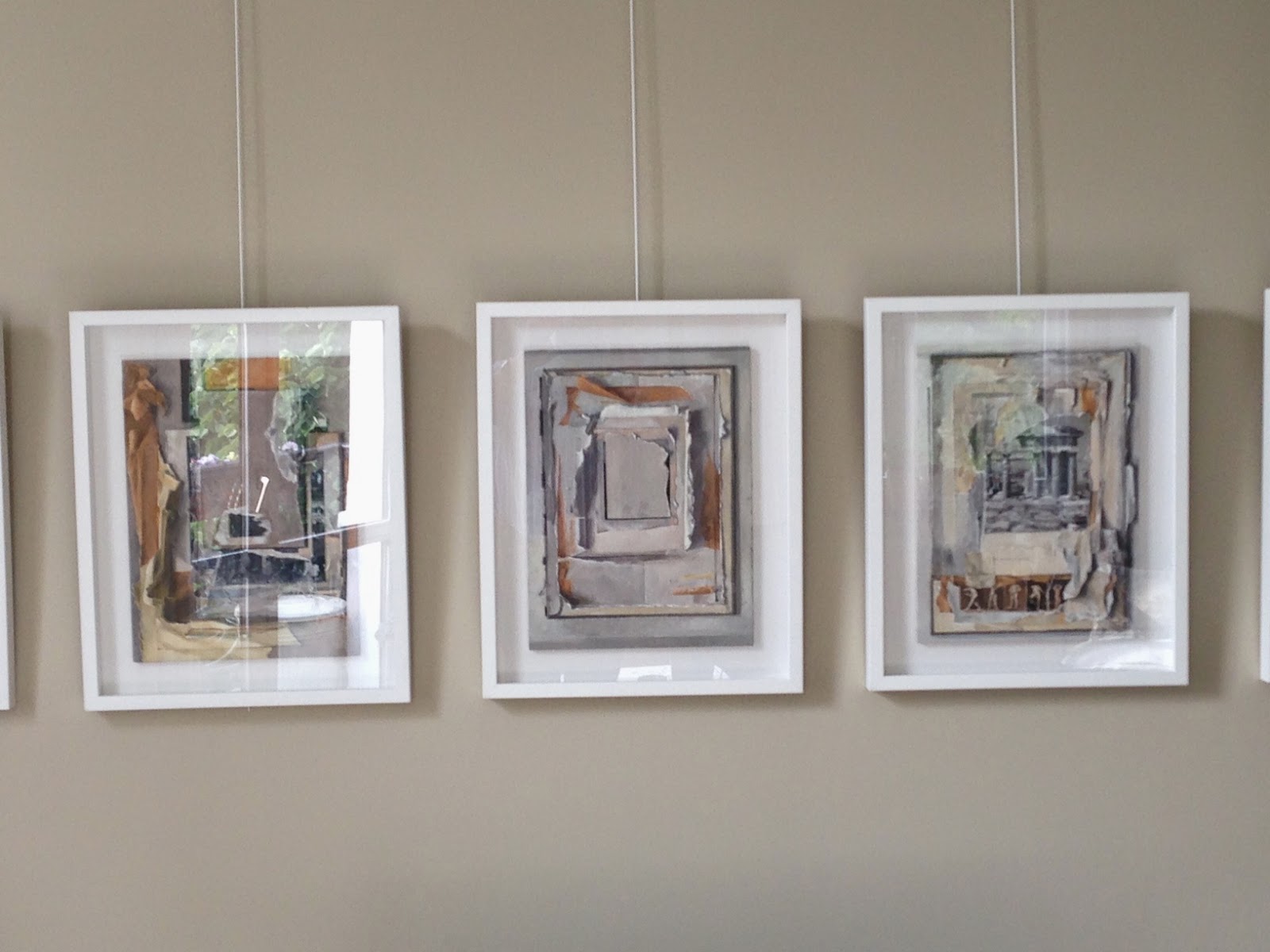 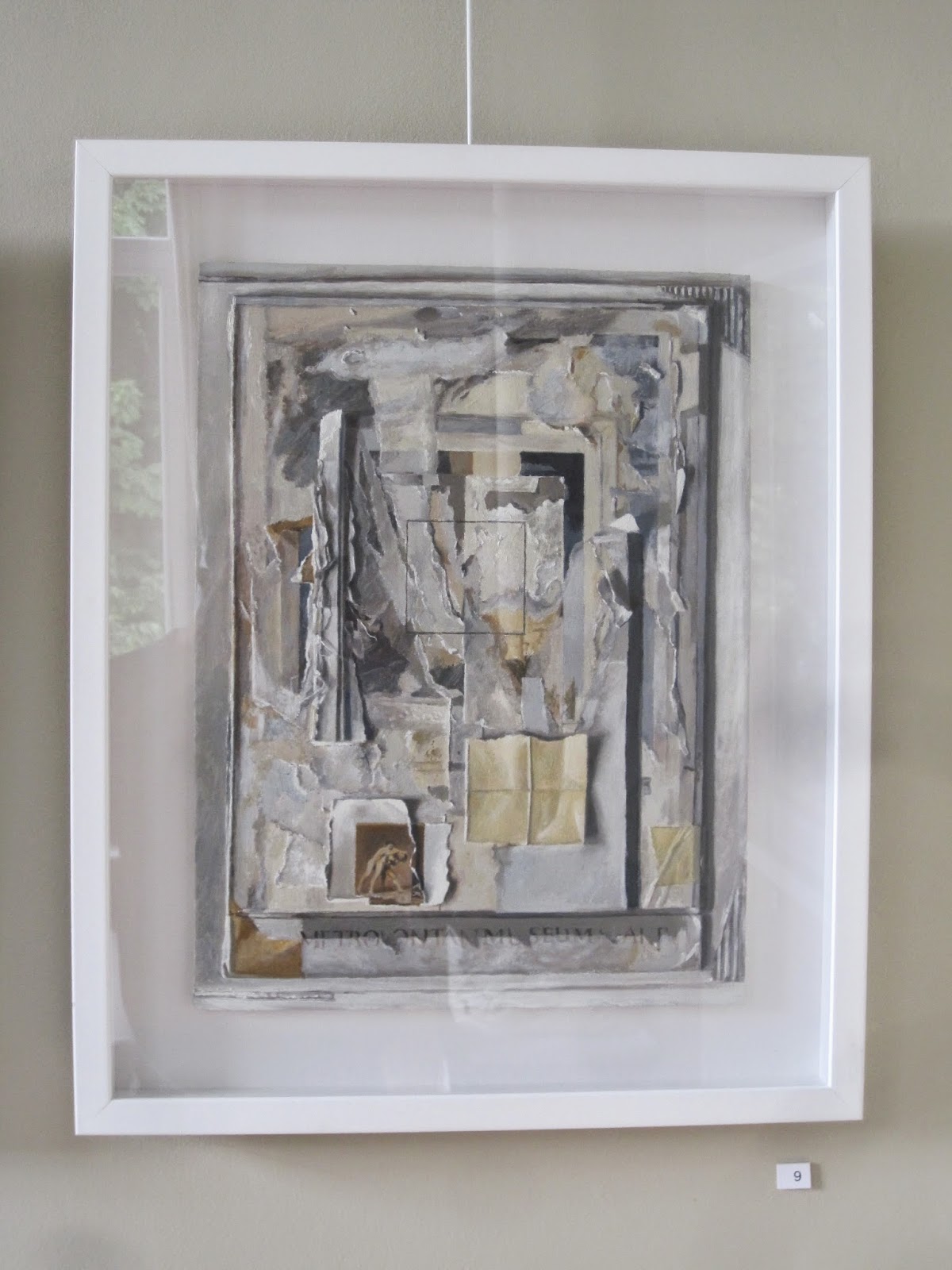 Wabi, the Japanese aesthetic of transience and imperfection, is derived from Buddhist teachings of the three marks of existence, dukkha, unsatifactoriness or suffering, annica, impermanence and anatta, emptiness or absence of self-nature. In 'Wind in the Pines. Classic Writings of the Way of Tea as a Buddhist Path', compiled and edited by Dennis Hirota, he quotes Kenko ( 1283-1350) in his 'Essays in Idleness' writing,

Someone once said, "It is distressing (wabishiki) the way coverings of thin-woven silk (affixed to the outer ends of scrolls) become worn so quickly". Ton'a replied, " It is after the silk has frayed at the top and bottom edges and the deteriorated roller has lost its mother of pearl inlay that it acquires elegance."

He goes onto say,

The word wabishiki has an unmistakable negative connotation here, but to the person of taste the condition of decline it intimates possesses aesthetic value. In the appreciation Kenko expresses for elegance burnished by the passage of time, there is a strong kinship with tea, which cherishes the patina that utensils gradually acquire through long and caring use. Kenko continues, " In all things whatever, completeness in every detail is undesirable; that which is just left in an unfinished state holds interest.


Posted by Alan Mitchell at 5:29 AM No comments:

Contemplating squares, circles, time and space over a cup of tea last Thursday morning in Russell Square, before heading north to Lancaster, I was considering the way nature and culture are framed by  geometry in 18th and 19th century urban spaces like this one, composed with a loose circle of trees set into a square surrounded by the clamour of central London traffic, like a calm green oasis in the form of a Tibetan mandala; shapes echoed by the Great Court of the nearby British Museum. 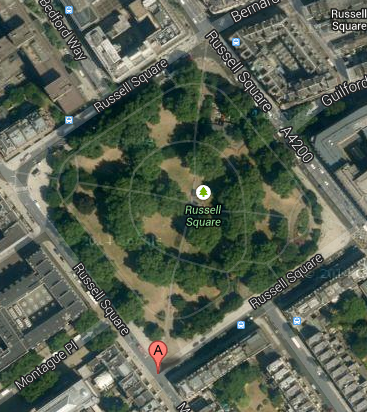 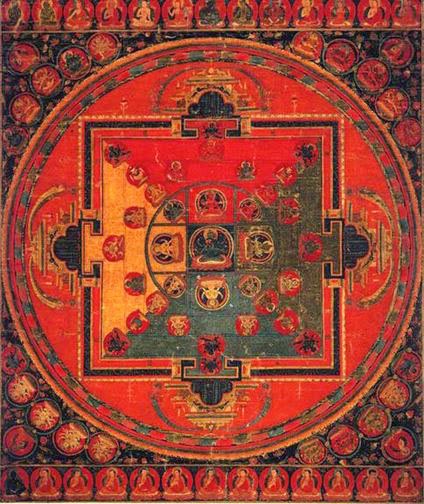 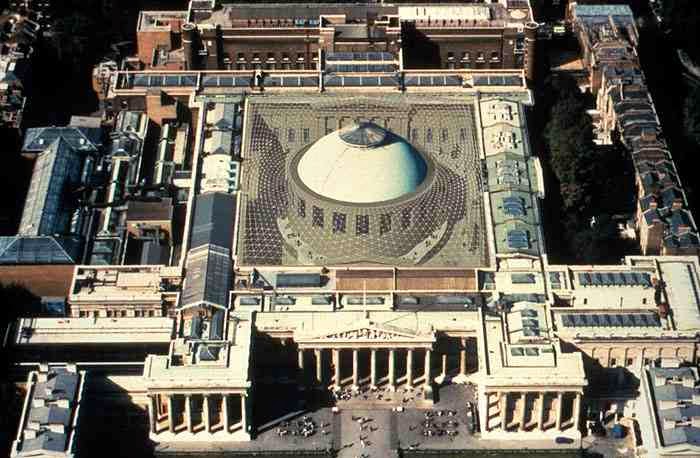 The week before in Brussels at Notre Damme de la Chappelle I heard Paul Van Nevel and the Huelgas Ensemble perform choral works from the 17th century in a concert coinciding with the Zurbaran exhibition entitled, 'L'oreille de Zurbaran'. Using a circular formation for his singers, as he often does, set into a square, which clearly relates to and corresponds with the gothic architecture, he creates an equivalent 'geometry of sound', engineered like and echoed in the stresses and strains, weights and counter weights of the stone arches and groin vaulting of the roof and nave. 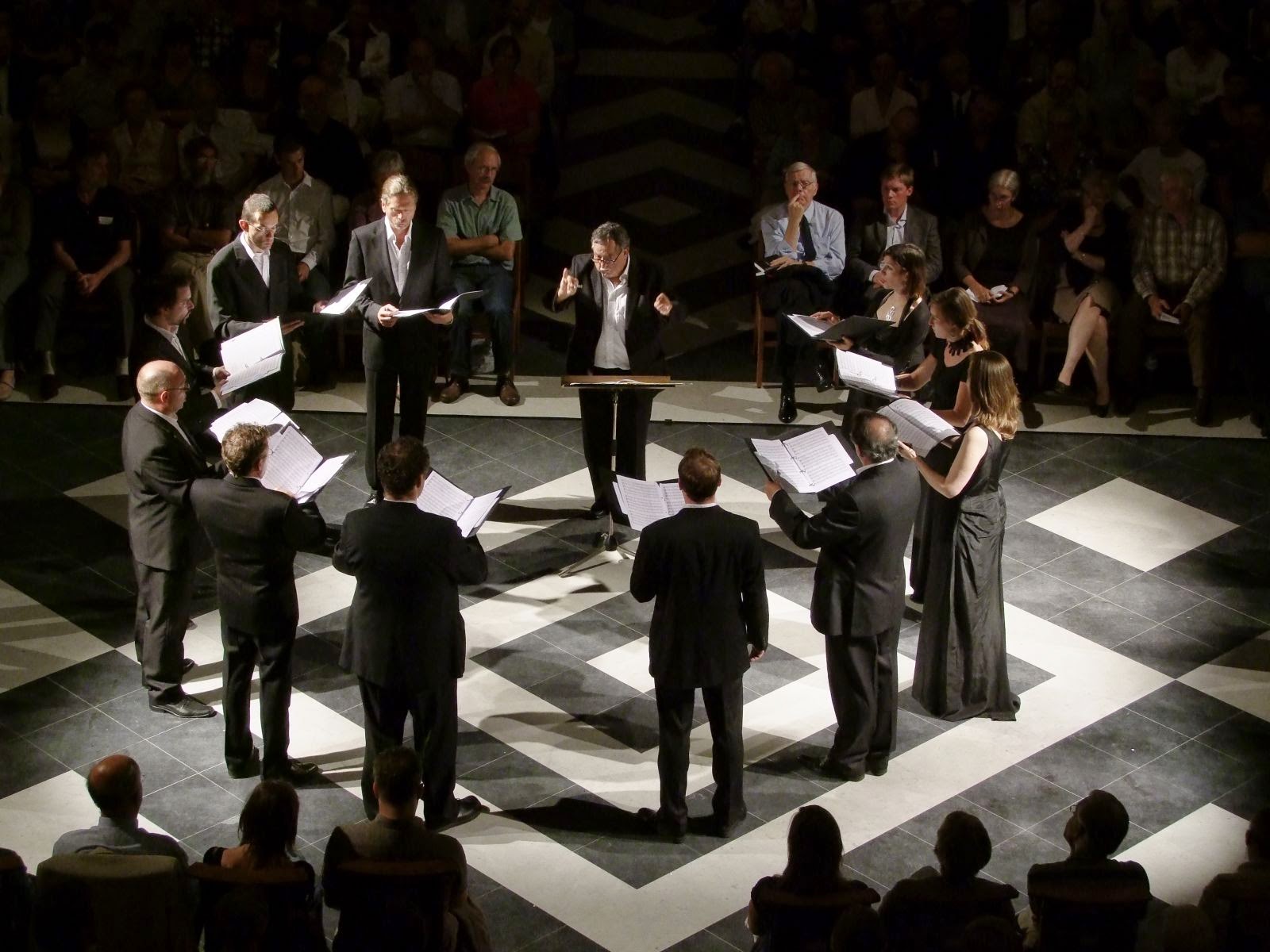 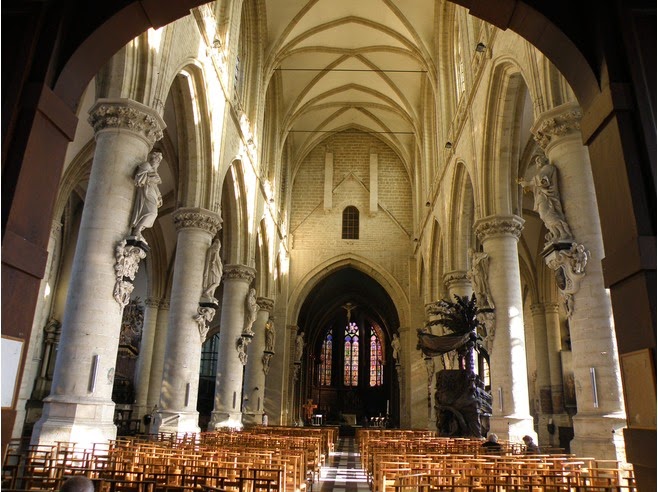 Posted by Alan Mitchell at 2:32 PM No comments: