A couple of weeks ago I visited the calligraphy collection of Jan Broes in the house 'De Zomere' in Oude Zomerstraat, Brugge, which Marguerite Youcenar decided would be the house of her fictional hero, the physician/philosopher/alchemist Zeno in her book 'The Abyss,' set during the Renaissance in Flanders. 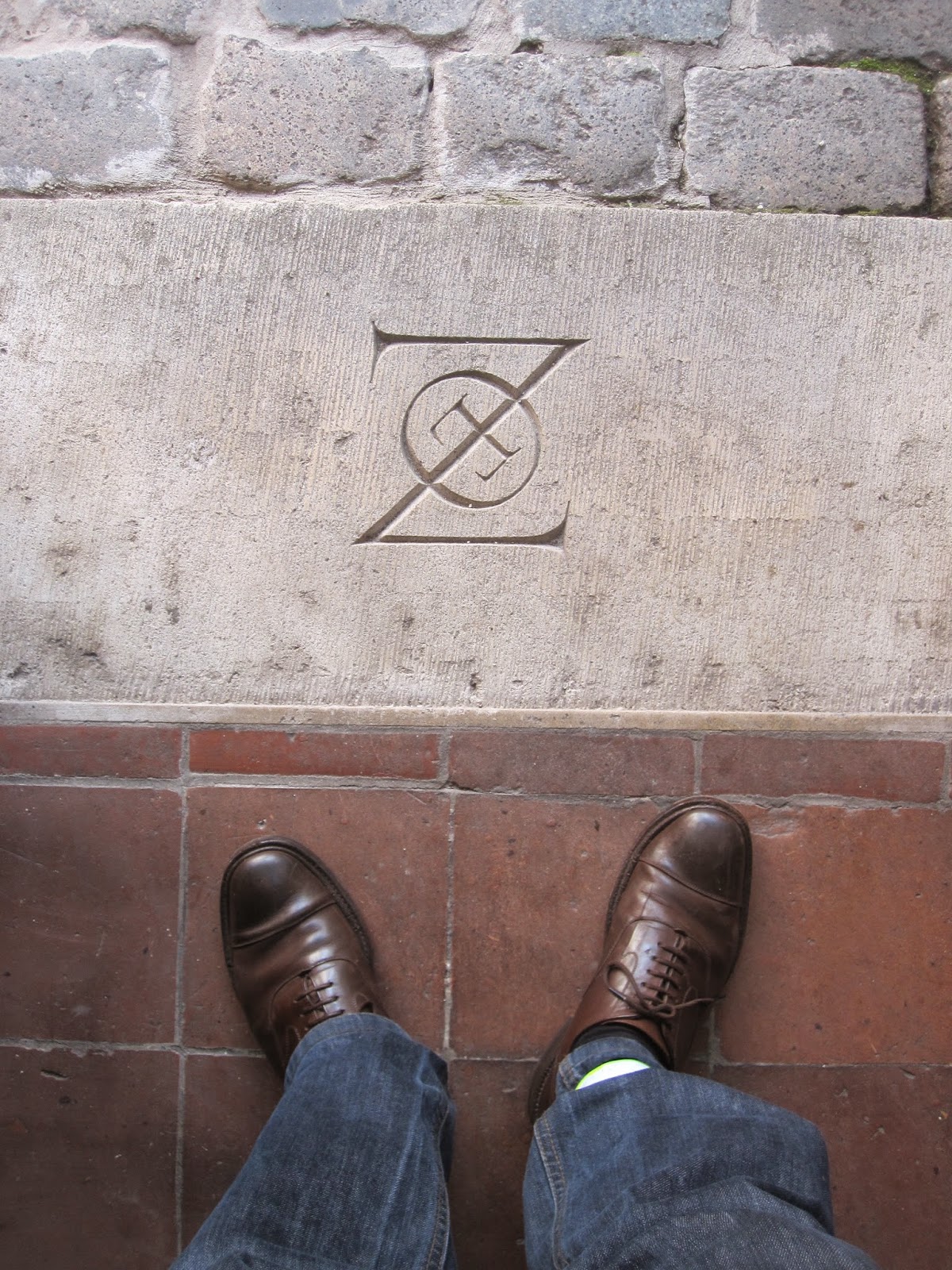 The four elements, earth, air, fire and water are present in both obvious and subtle ways in the various parts of the house from the threshhold of the door to the windows, alcoves, fireplaces and the pond in the courtyard. 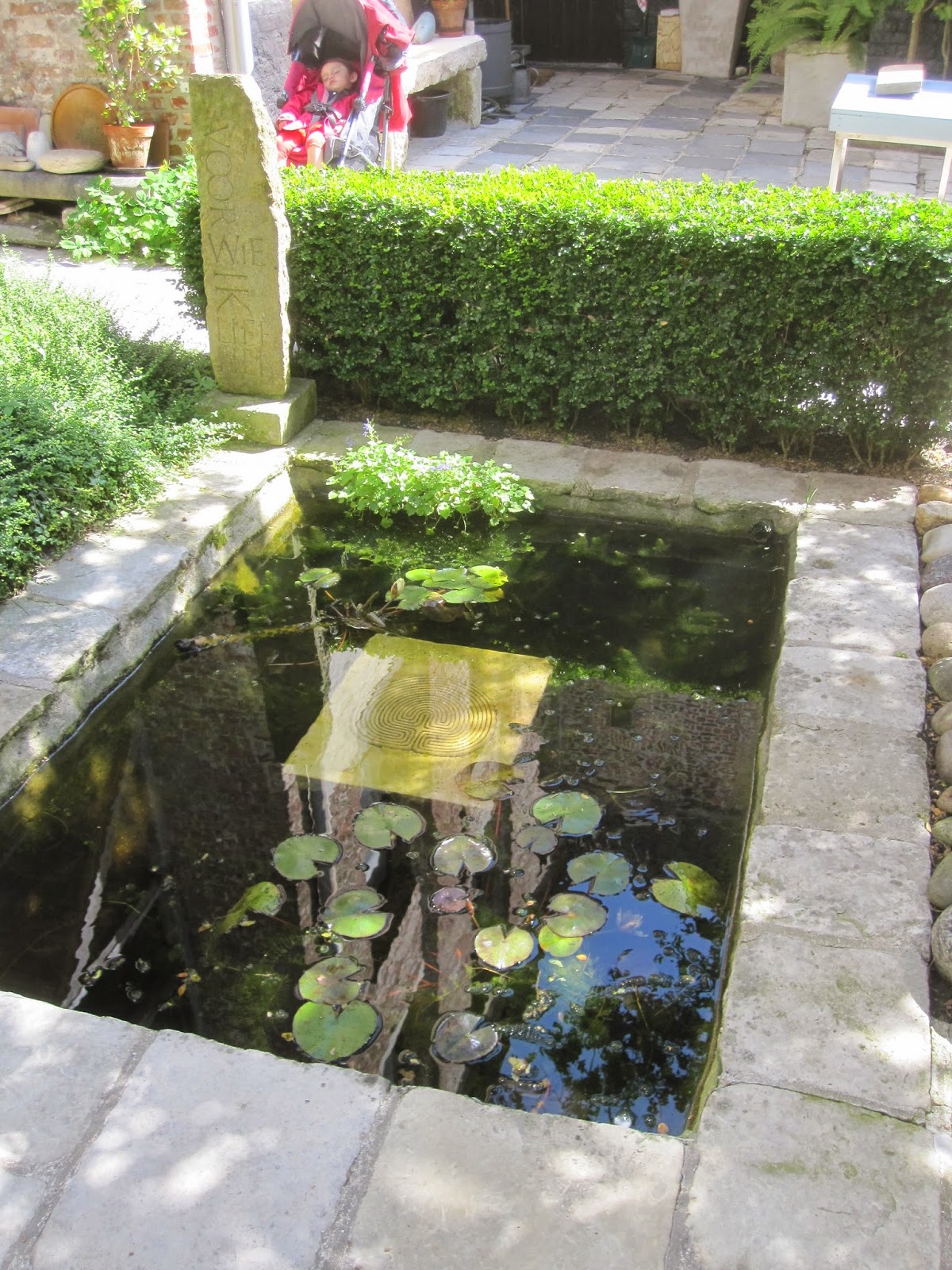 The calligraphy which can be found in several significant locations around the house on stone, paper and other materials, often appears in conjunction with the recurring motif of a carved labyrinth. The whole house has a quality of charged significance. 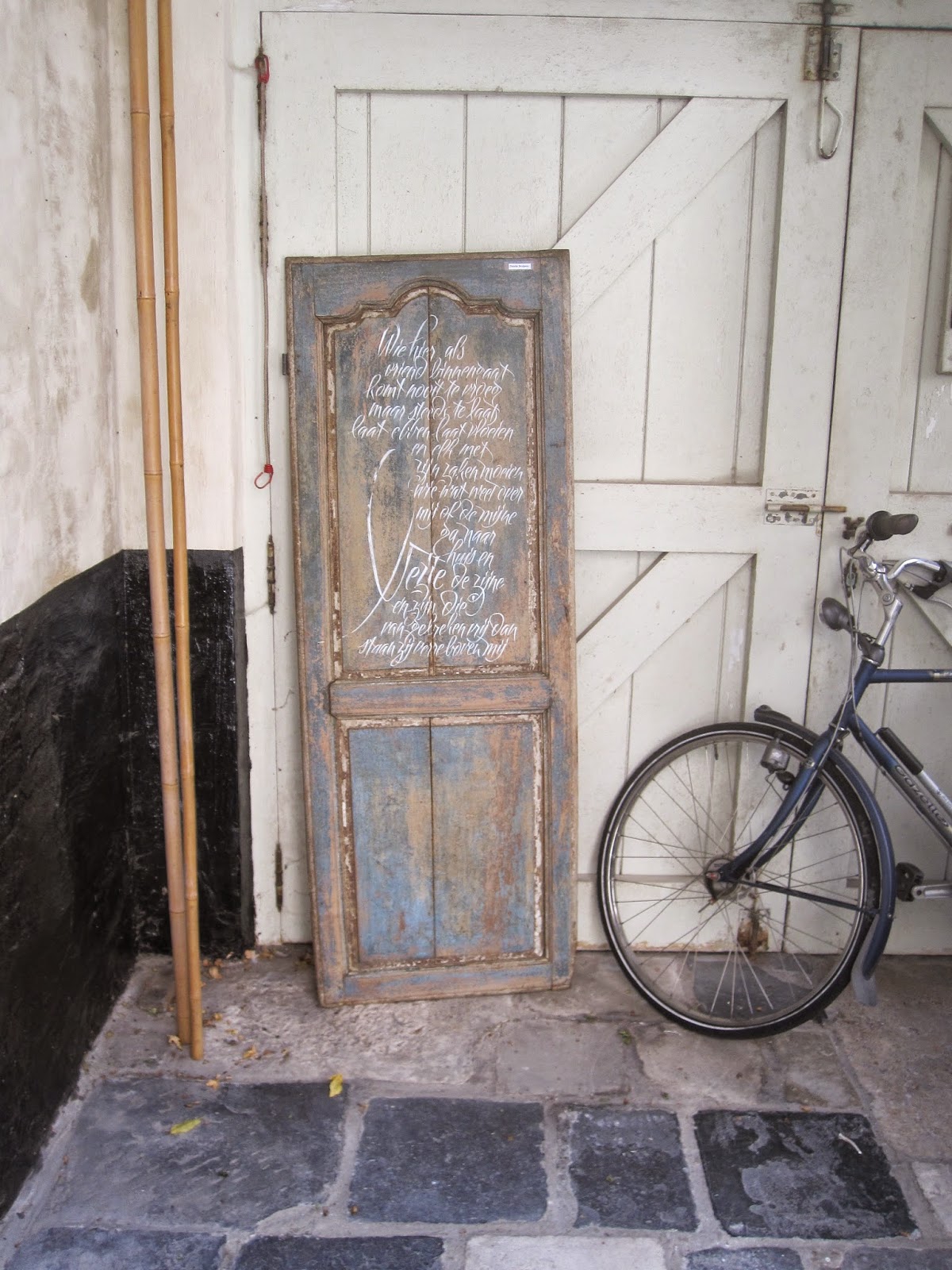 Encounters with mundane everyday spaces and things are potential moments of metamorphoses, as the ordinary is transformed into the extraordinary. Like the alchemist's quest for the philosopher's stone,  base metal becomes gold and relative time aligns with the absolute.   Ciphers and symbols provide keys to unlock a parallel universe 'hidden' in full view in the domestic space. 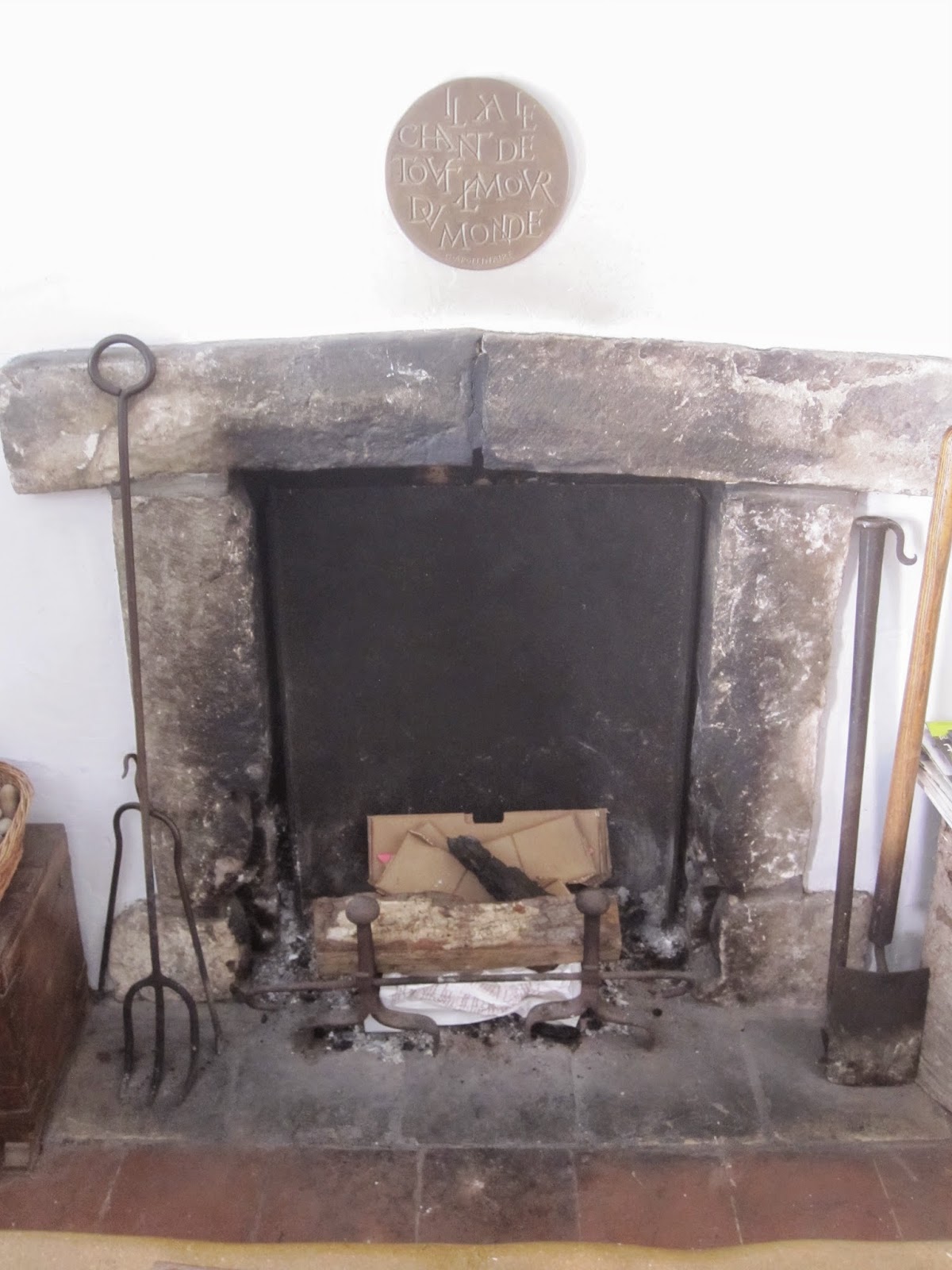 There is a very Flemish sense of enclosed spaces, with windows leading to both inner and outer worlds and visions; immanent and transcendence, sacred and profane. 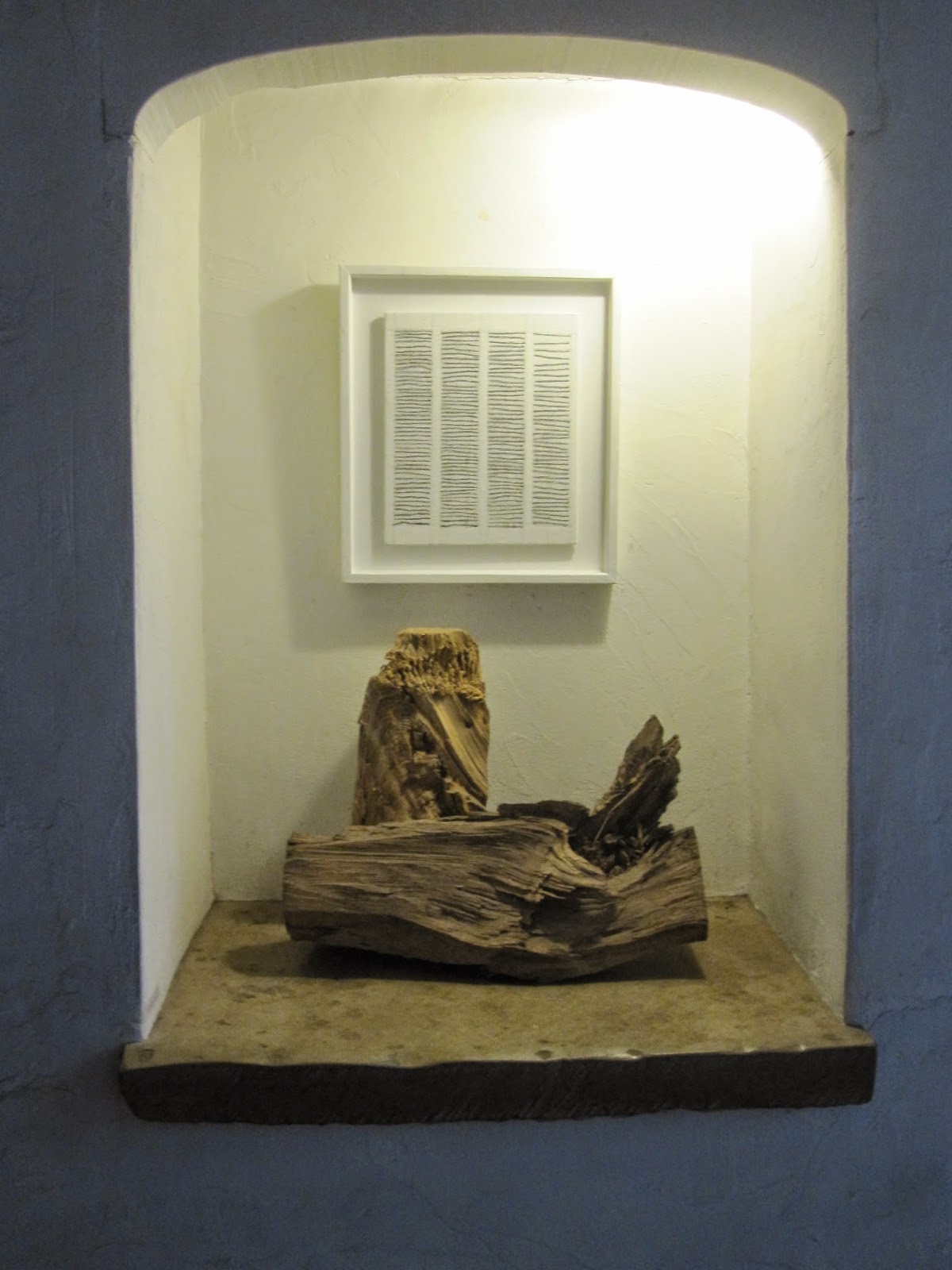 The medieval mind, described by Umberto Eco in his book 'Art and Beauty in the Middle Ages', saw and read the most ordinary things with loaded metaphysical significance. Those who look closely and try to decipher the meanings encoded in early Flemish paintings, like Robert Campin's 'Merode Altarpiece', will find the same ordinary domestic world full of theological and supernatural significance, framed by solid perspective of doors and windows, both painted and real, hinged to the frame of actual triptych itself which opens and closes to both hide and reveal its message like the angel in this annunciation. 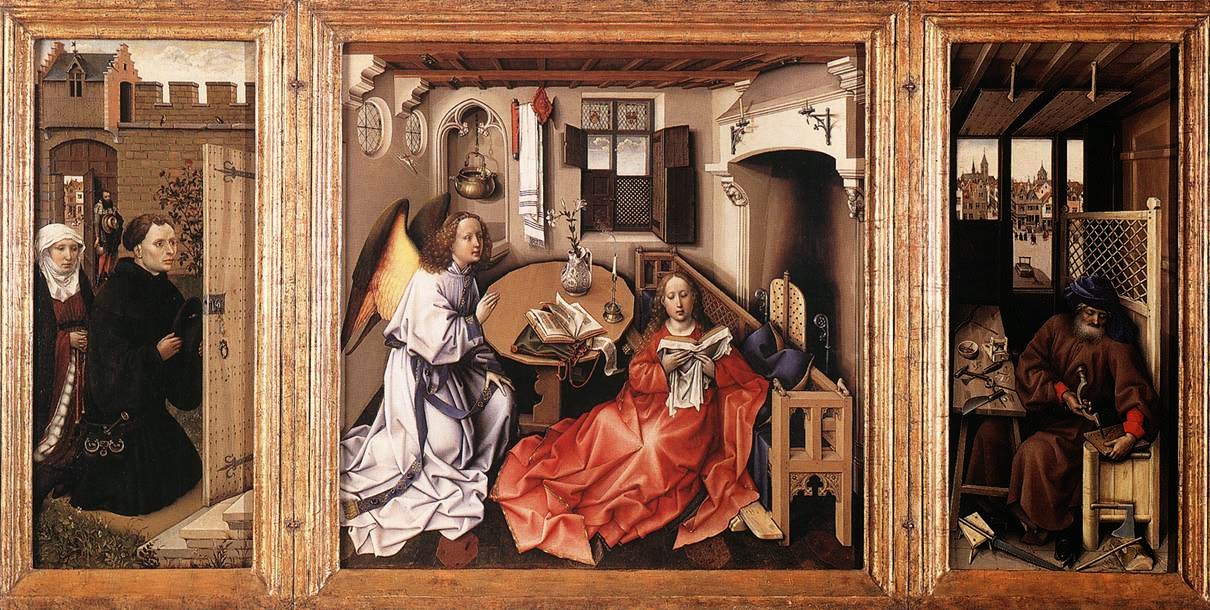 Here are some more pictures from 'De Zomere' 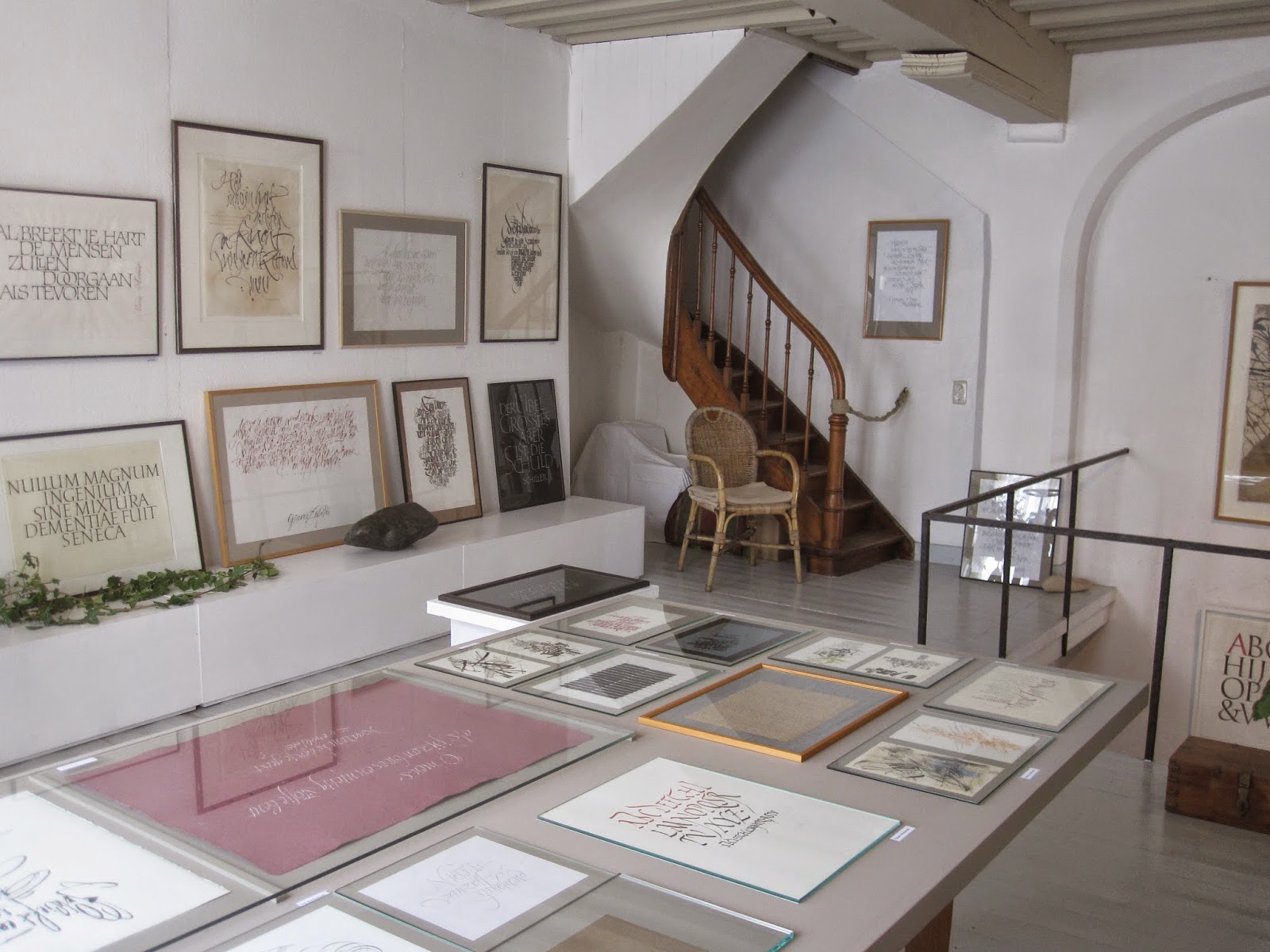 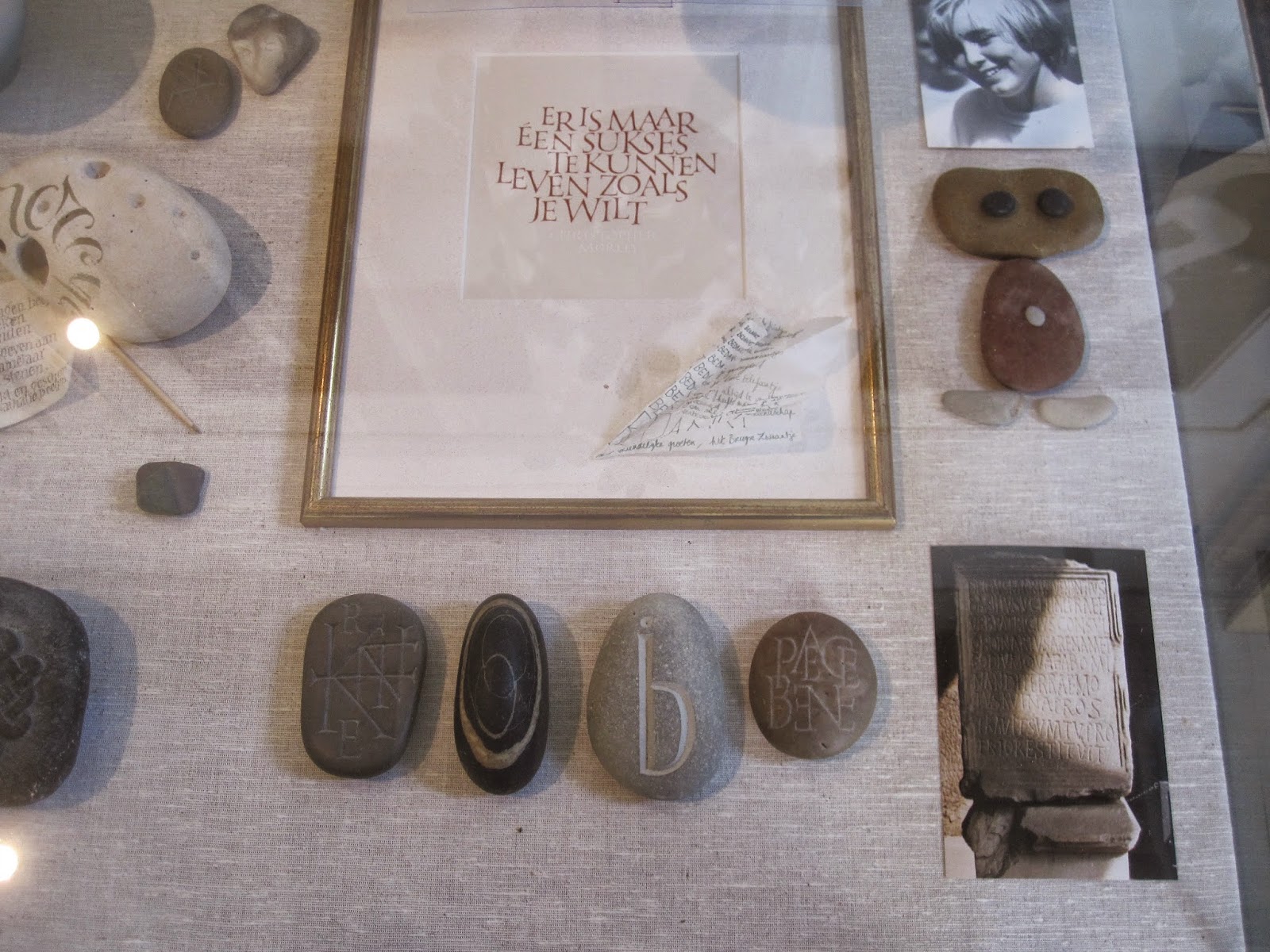 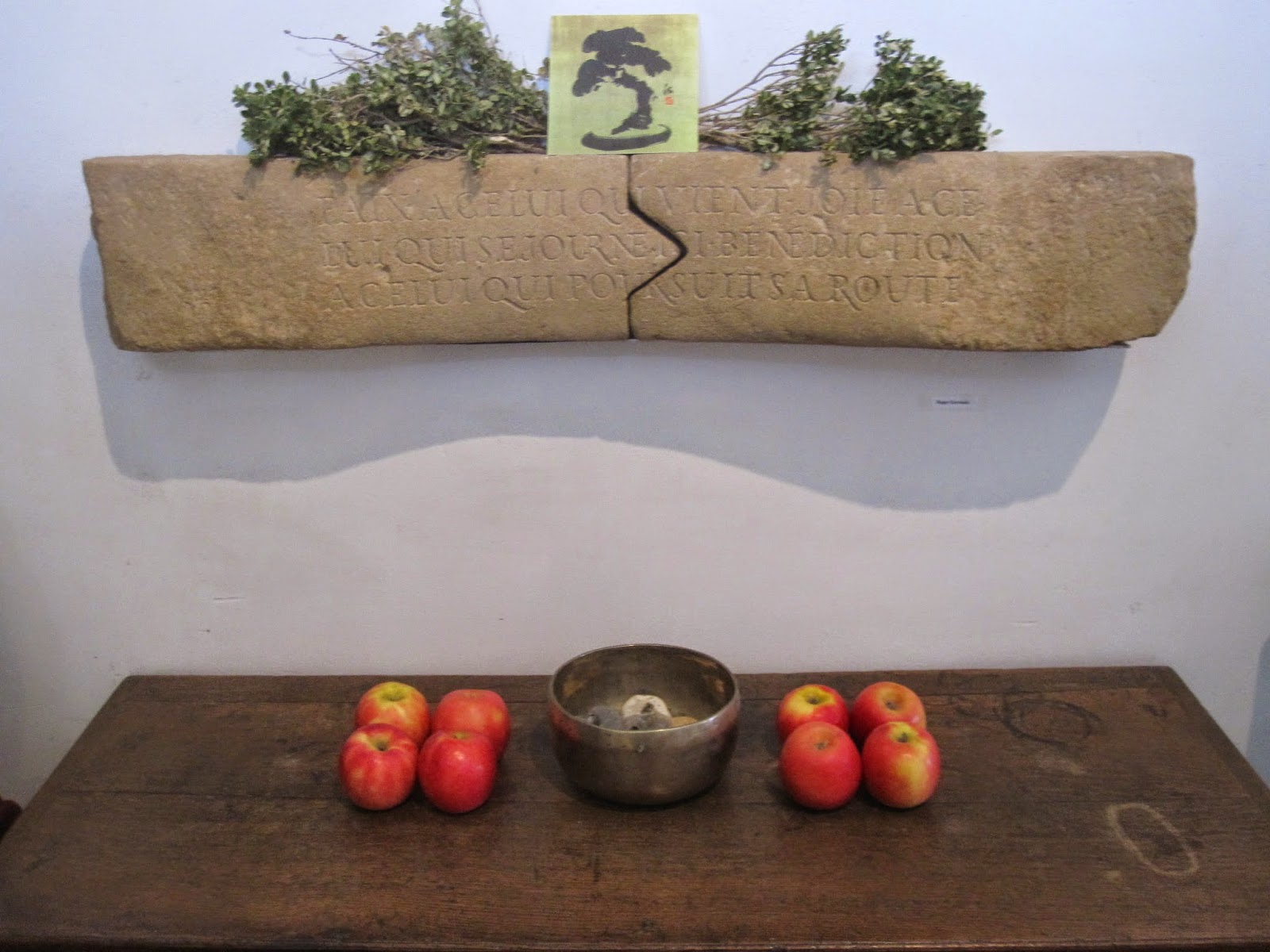 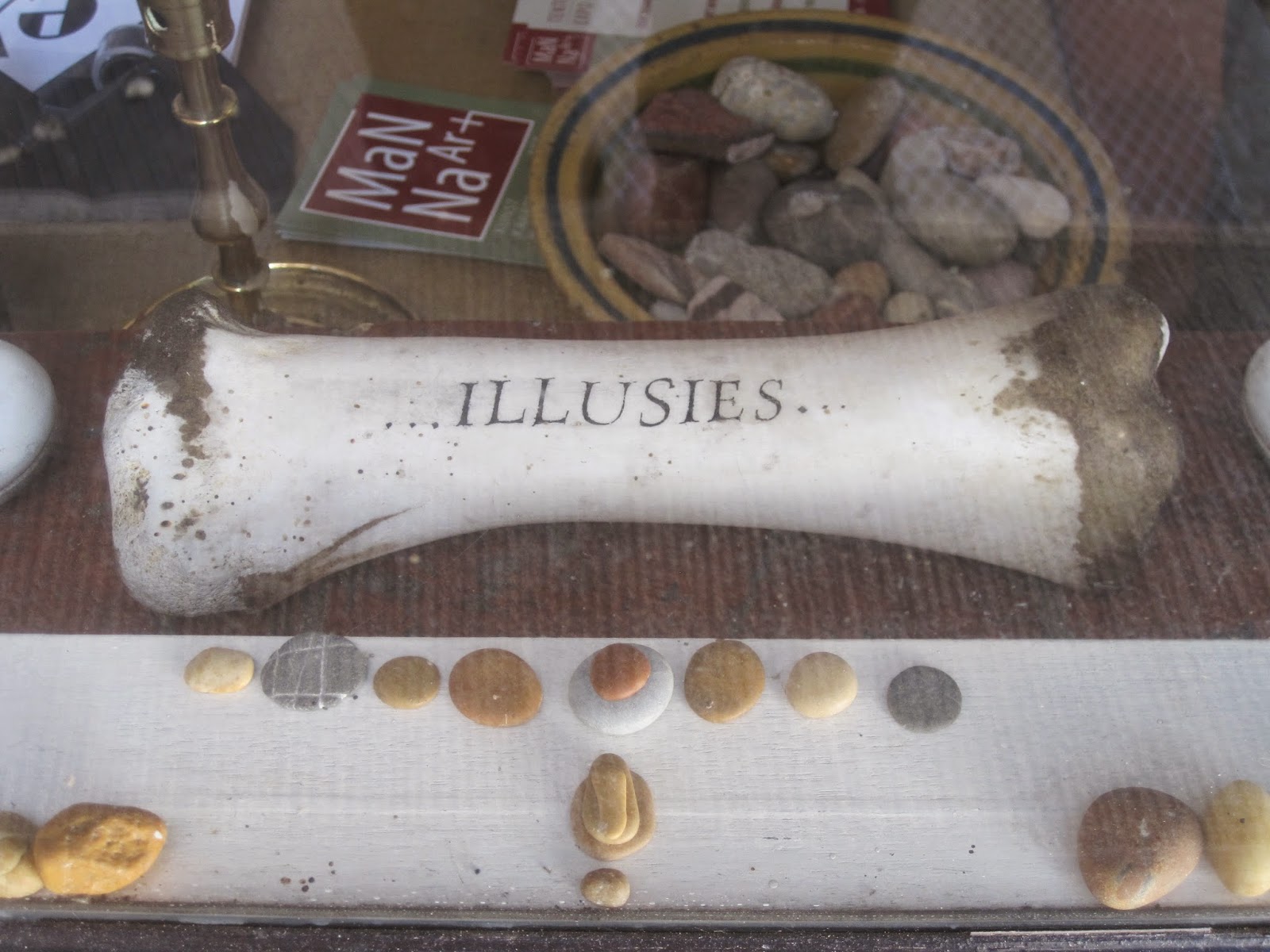 .....and took these photos of him making paper by hand in his workshop in Greinschuurstraat. 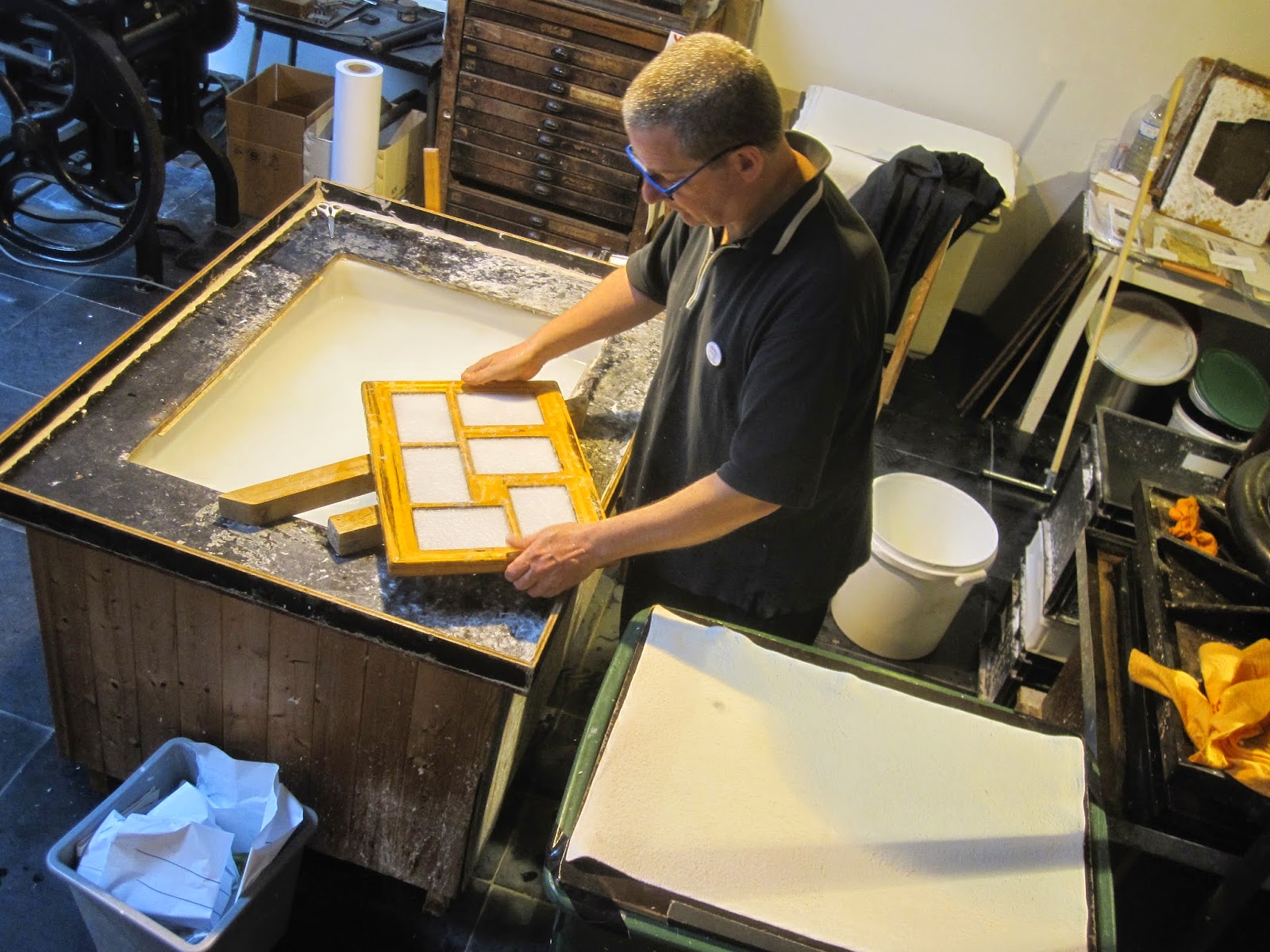 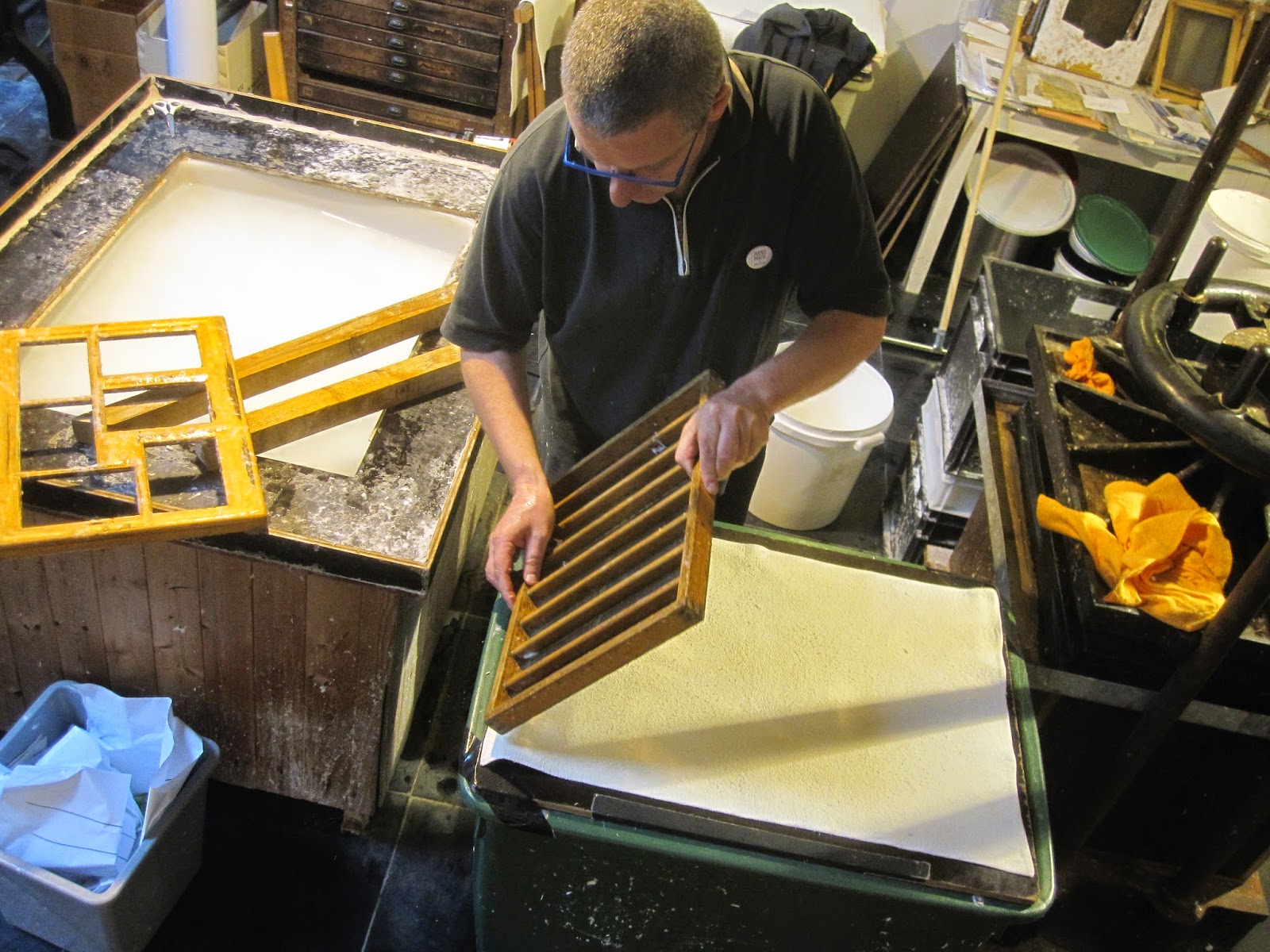 One way to save paper is to value it - in a world of disposable Xerox handmade paper is something you keep for life......
Posted by Alan Mitchell at 8:48 AM No comments:

Musical and visual composition - the sound of colours and shapes ? 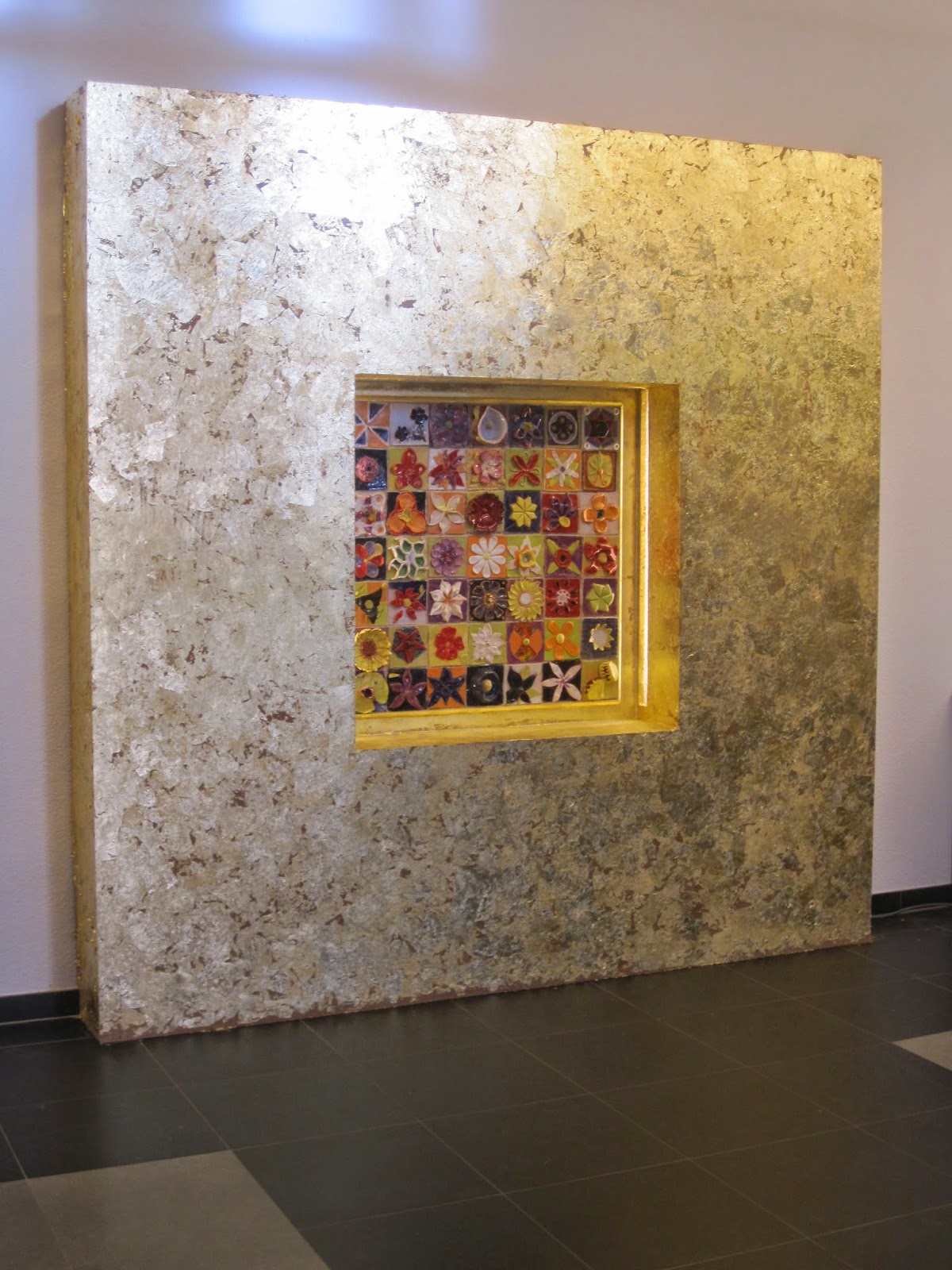 The St John's 50th Anniversary golden wall and ceramic tile installation made with students explores the synthesis between the circle and the square, organic and geometric shapes, light and colour and the tactile and visual qualities of 'gold leaf'.

This light hearted playfulness with the possibilities of the square 'frame' and grid continues to preoccupy me in class with various student projects and some of my own experiments.

Continued to work on the series of geometric abstractions for F. and ended up with a cycle of six small paintings that seem to form a sequence and constitute a kind of hommage to Kazimir Malevich -appropriate perhaps as we are planning to visit the exhibition at Tate Modern on the London Art Trip in October. As I continue to develop this work I hope to be able to freely explore the colour spectrum and its various subtleties as well as the 'musical' relationships between various abstract elements of shape and form in space within each composition. 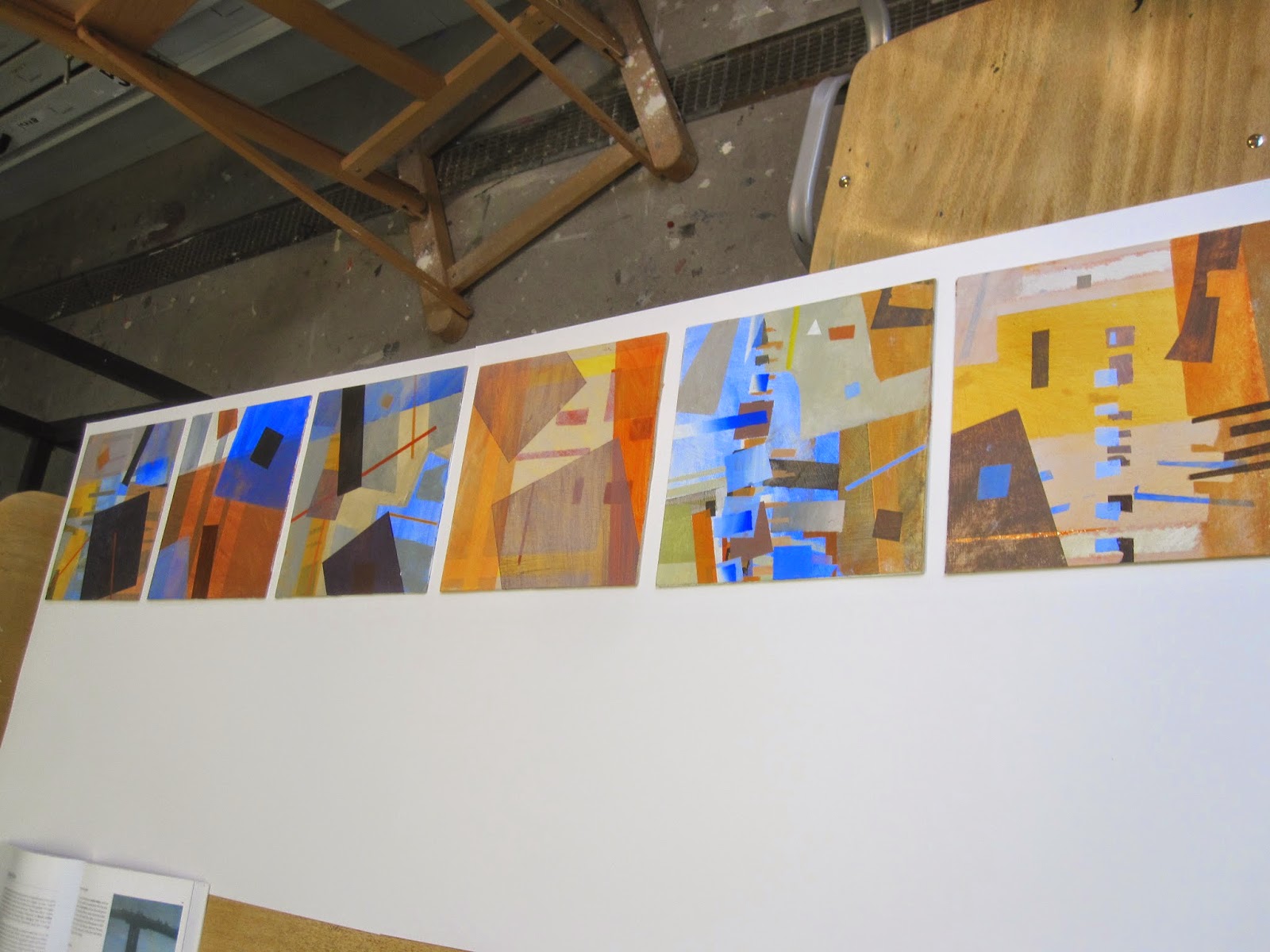 Posted by Alan Mitchell at 7:30 AM No comments:

Mapping Sound in Time and Musical Form in Space

I have started some experimental new work for F. based on a series of drawings I made some time ago  called 'mappings'. These were concerned with lines and shapes inspired by the patterns of fields on maps and archeological drawings, with overlapping, transparency and superimposition used to create depth. I plan to develop a series of geometric abstractions in layers of paint, applied using masking tape, that will explore a limited range within the colour spectrum focusing on complementary relationships and using colour and tone to create, balance, contrast, space and depth. 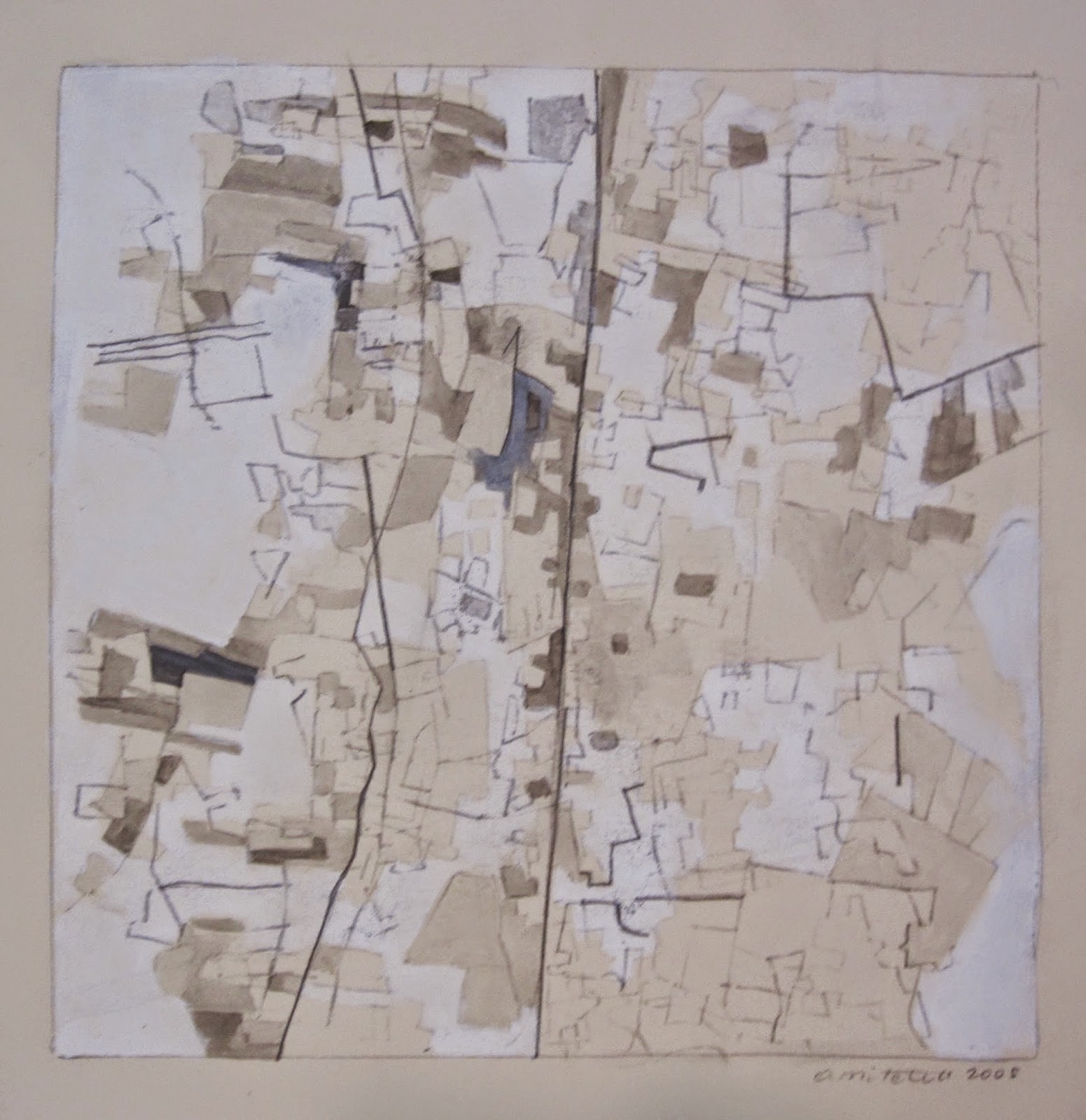 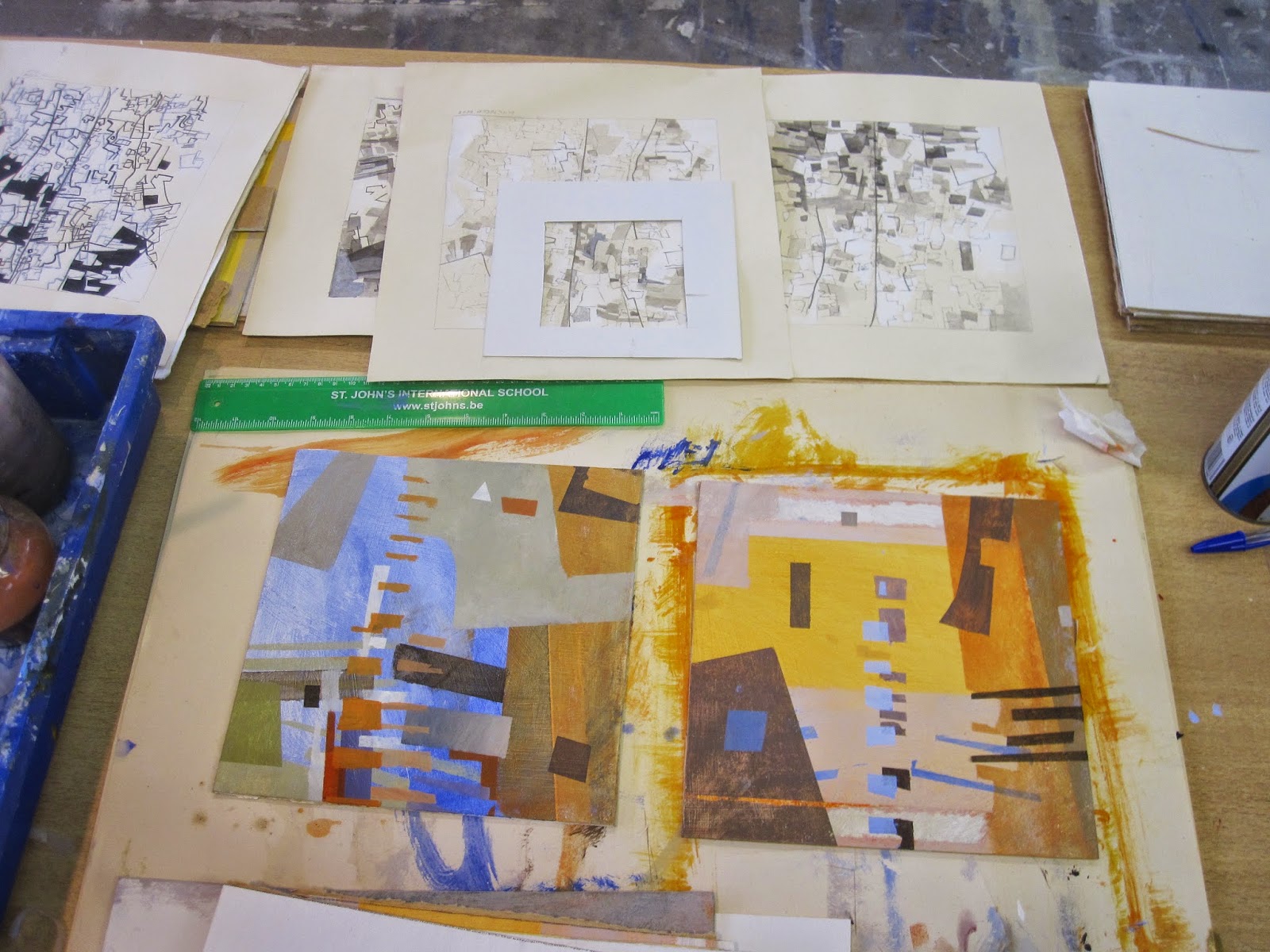 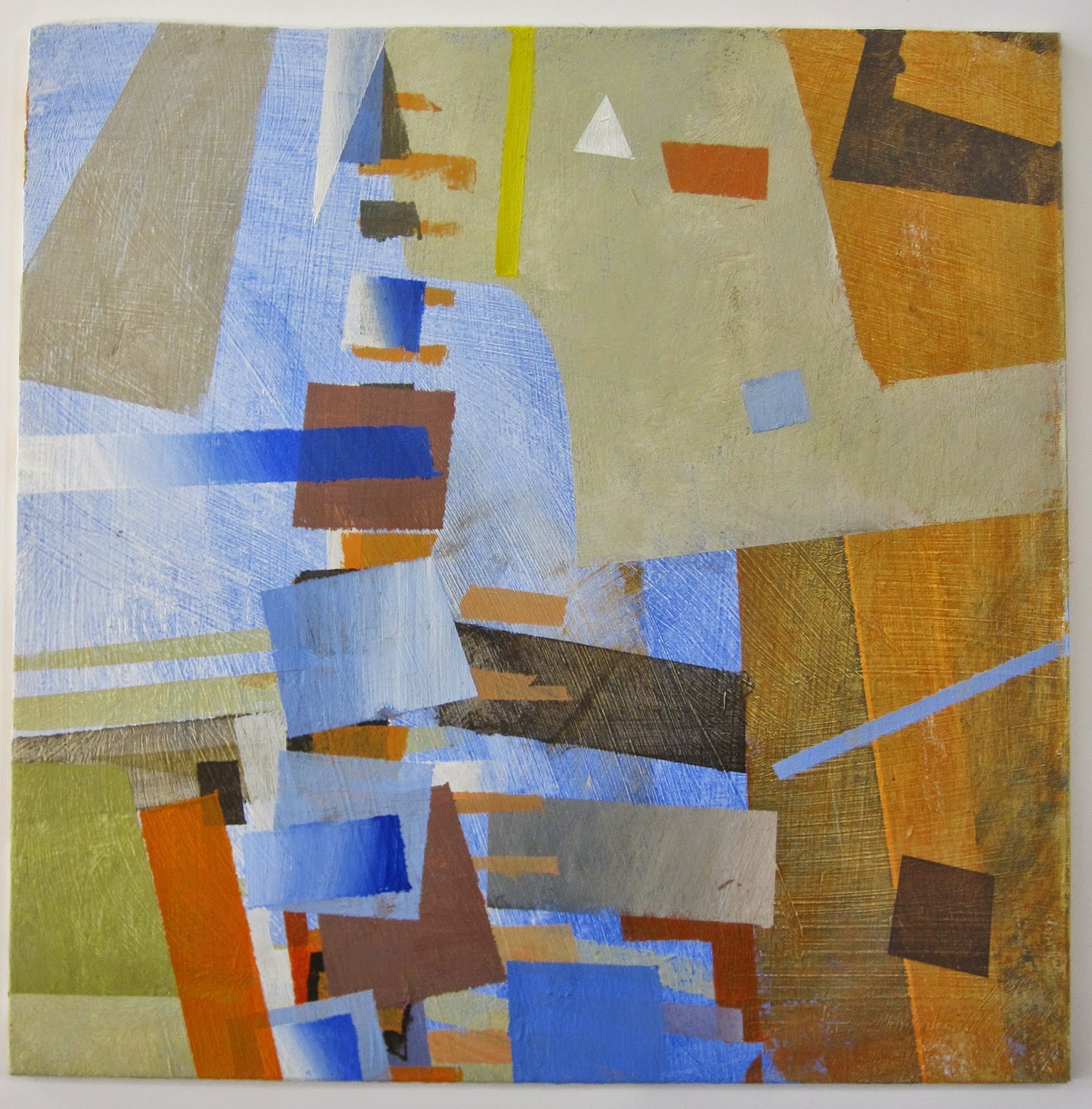 The results of initial experiments (illustrated above) have, it seems, been influenced by another project I am working on this year in class with students called 'Drawing Sounds'. This is designed to explore the suggested relationships between the compositional structures and expressive sounds of music, existing in the dimension of time, and the various marks of different media used in drawing with visual elements like gestural lines, patterns, rhythms, shapes and colour etc which exist in the dimension of space. The project is based a programme of suggested works that pianist Kaoru Tashiro will play in a concert in school in January 2015, hopefully with some of the student's drawings projected in a stop motion animation.  We will explore the importance of music in the work of Kandinsky and Paul Klee as well as the idea of a language of pure abstraction and reference Klee's 'Pedagogical Sketchbook', Kandinsky's, 'Point and Line to Plane' and 'Sounds'.

Posted by Alan Mitchell at 8:21 AM No comments: