Have spent the first part of my holiday rebuilding the terrace wall with largely reclaimed 16th century bricks. These warm red-ochre hand-molded terracotta forms, with the look and feel of loaves of bread, seem to find their place in the gaping 'wound' of the damaged wall through their own material agency, nudging into each other and bedding down with lime mortar to heal the damage caused through the removal of the outside toilet and store-rooms. The skin of the wall has a surface of patterns and rhythms as structurally logical and aesthetically balanced as the internal dynamism of a musical score or literary composition. It bears all the scars of fire, water, violence, damage, time and decay with almost the same vulnerability and sensitivity as human flesh as well perhaps as the marks or repair and regeneration. 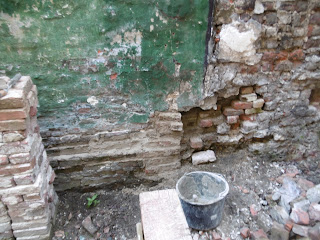 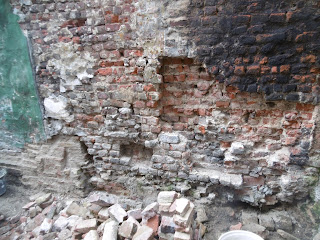 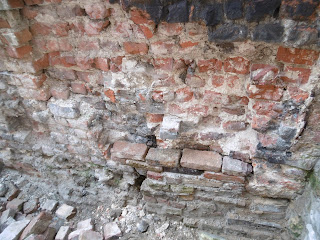 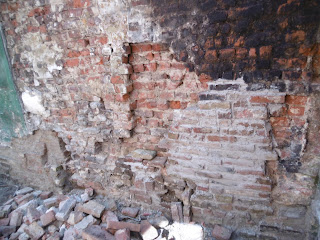 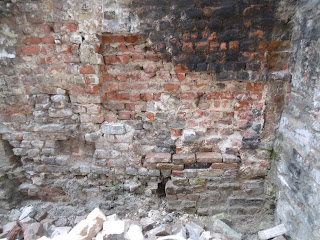 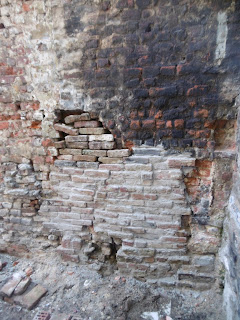 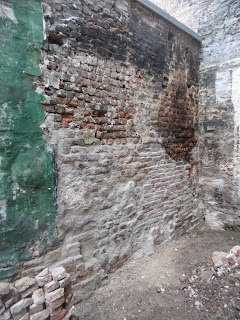 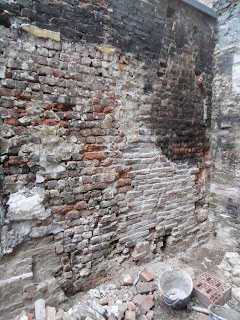 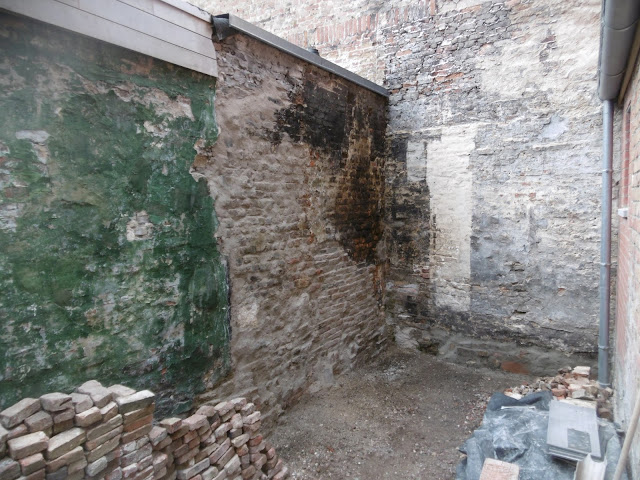 When the whole wall is re-pointed and given a traditional lime painted finish it will form a large and visible presence, in the only 'outside' room inside the house. Viewed from the kitchen or living room windows it defines the unlimited space of sky in its finite frame through the changing play of light, form, texture, pattern, and colour across its surface where one can read human and material agency across time and space. Perhaps it will also form the wall for a climbing rose in a small enclosed kitchen herb garden or 'hortus conclusus'.

'The current engagement with matter in art and cultural history is however more far reaching and fundamental...... It has come about in part through a dissatisfaction with the oddly disembodied sign or image of recent art history, but it is also linked to a much larger cultural interest in things, which may in turn be spurred partly by the increasingly disembodied nature of information and images in the digital age. Against globalized networks of data, a focus on the importance of the handmade and specific object can be seen like an act of resistance, even a form of grace'

This above quote comes from the introduction to 'The Matter of Art. Materials, practices, cultural logics c 1250-1750,' edited by Christy Anderson, Anne Dunlop and Pamela H. Smith and published by Manchester University Press. Reading the essays inside by various contributors reinforces the conviction that experiential knowledge and understanding can transcend abstract thought and language, something artists know intuitively by making things out of material processes and academics learn through theory rather than practice. Meaning emerges though the creative interaction and relationships between many agents, 'animate' and 'inanimate' including the materials, the process and the context as much if not more than any prior concept or idea 'imposed' on them by an individual. For some kind of enriched creativity to happen the right conditions, internally and externally, need to be present, recognized and actively cultivated. Cause and effect are not linear here but complex and perhaps ultimately mysterious, beyond the grasp of logical reasoning alone.

Meaning in the context of the wall of a house as an active agent is inseparable from the sense of 'dwelling' in a mind/body in time and space.

In their essay 'Non-Human Agencies: Trees in Place and Time' by Owain Jones and Paul Cloke the writers quote Ingold's discussion of Breugel's painting 'The Harvesters' (below) to illustrate their assertions about the nature of non-human agents in creating a sense of place or 'dwelling'.


.......In other words, dwelling is a complex performative achievement of heterogeneous actors in relational spatial/temporal settings.  Ingold (1993) illustrates these ideas in a discussion of Bruegel’s painting, 'The  Harvesters'.  In this picture, an old pear tree takes centre stage as farm labourer rest and eat in its shade in between harvesting a field of grain; behind these is a view of a valley and a distant village and landscape. Ingold says of the tree by its presence it constitutes a particular place. The place was not there before the tree, but came into being with it. [N]o other tree has quite the same configuration of branches, diverging, bending and twisting in exactly the same way. In its present form, the tree embodies the entire history of its development from the moment it first took root. And the history consists in the unfolding relations with manifold components of its environment, including the people who have nurtured it, tilled the soil around it, pruned its branches, picked its fruit, and – as at present – use it as something to lean against. The people, in other words, are as much bound up in the life of the tree, as is the tree in the life of the people (pp. 167–8).