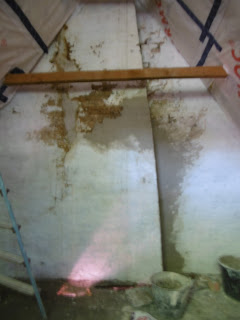 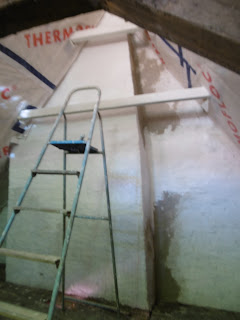 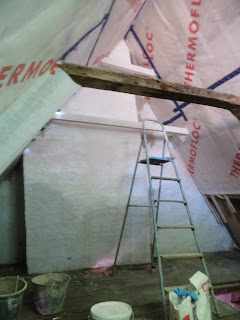 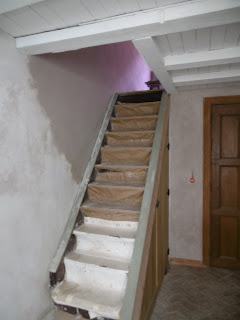 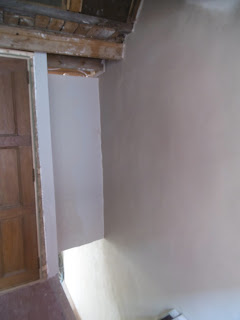 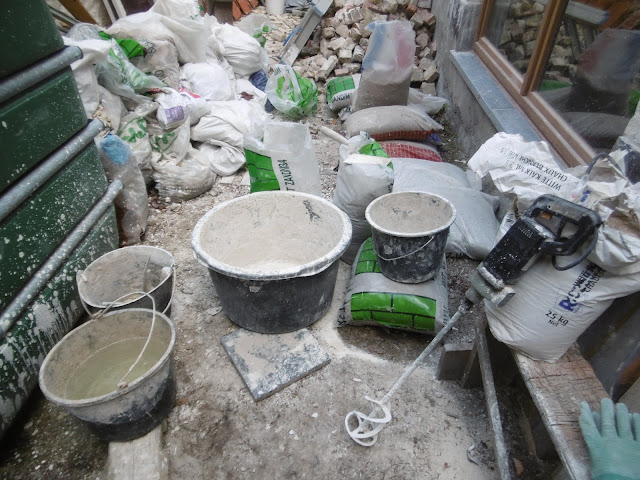 With the sunny, dry and warmer spring weather conditions are right again for mixing lime plaster and I have been able to work on walls upstairs now that the ground floor is basically finished. Insulating  the loft and other roof spaces and plaster boarding the ceilings and partition walls is the main preoccupation inside at present. Over the summer we plan to fix the rest of the woodwork, including replacing the smaller damaged oak beams on the first floor with good reclaimed old oak and putting a new solid wood floor in the attic as well as fitting it's new window into the space that was bricked up. 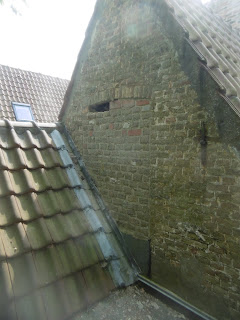 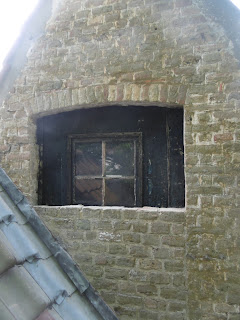 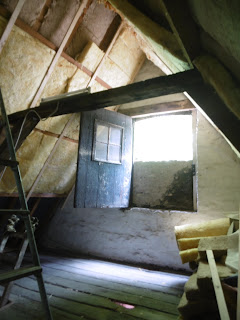 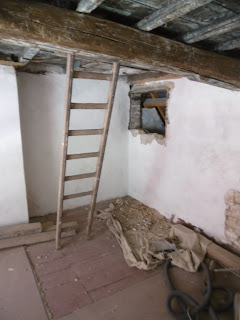 Hopefully we can also finish the walk-in wardrobe space off the main bedroom in the sloping cat-slide roof space where I have been opening up the bricked up door, the reading corner on the landing and the small bedroom. In a few days 'Aquastra' will strip, consolidate and repaint the facade with lime and when this is finished over the summer I will fix the putty on all the front windows, sand and paint them inside and out as well as tidy up and prepare the walls and ground in the small courtyard space at the back. 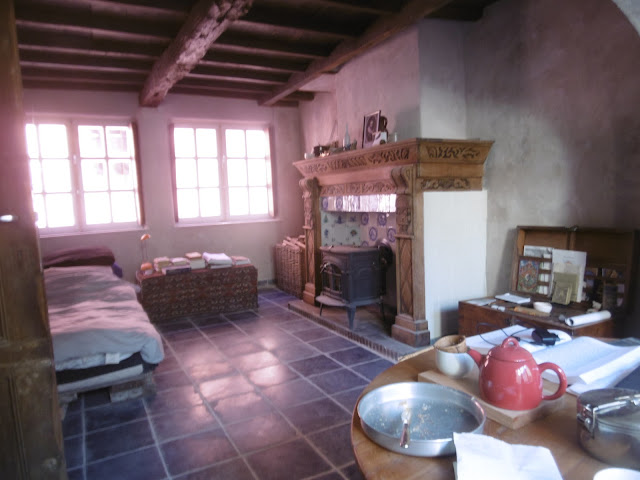 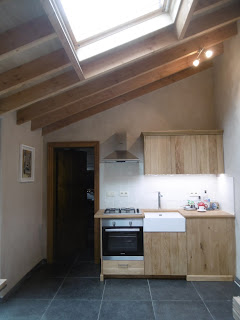 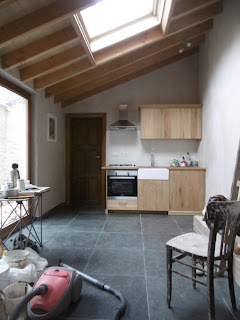 The good thing is that downstairs the small fitted part of the kitchen is neatly finished in solid oak by P. to match the other fitted parts in the bathroom, hall and porch and all the tile skirting is now fixed so it is much less dusty. Now I need to fix the old brass handles which I found in the flea market to the doors and do some serious cleaning, polishing and painting to finish these spaces off. 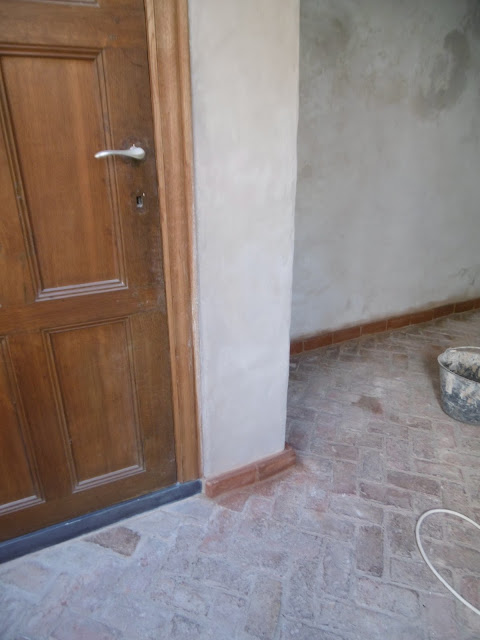 Posted by Alan Mitchell at 1:29 AM No comments:


I have long wanted to paint a small self portrait in the tradition of the philosophical 'vanitas' or 'memento mori' portraits of the 16th or 17th centuries. The work above is based on a small painting in the National Gallery in London which had all the key elements of the genre which I have recently begun to paint in oil on wood panel as a current work in progress. I have added a device below the hand and skull often found in Renaissance portraits by artists like Holbein, Bellini and Moroni which is a ledge and a small trompe l'oeil of folded paper on which I plan to write A. M. PINXIT. MMXII. AETATIS SVAE 53.  (which roughly translates as- A. M. painted this in 2017 in his 53rd year ) I plan to include a small flower ( not sure which yet and will have to carefully consider its symbolism) held in the left hand to contrast with the skull on which the right hand rests in the portrait.

Marking time with a backward glance at tradition in this way with a self portrait is a natural process for many painters. I particularly like Otto Dix's famous self-portrait painted in 1912 when he was a young man which evokes the early German masters. It puts me in mind of Herman Hesse's famous novel Narziss und Goldmund ( Death and The Lover) published in 1930, which charts the lives and relationships of two friends,  the monk, Narziss and the artist, Goldmund, and their ascetic and aesthetic modes of being,  in the middle ages.

The 'self-consciousness' of these reflections in a mirror, this speculation ( from the Latin 'speculum' for mirror ) or inquiry into both the outward appearance and the inner reality of 'the self', emerges in this early modern period and is implicit in the Renaissance portrait, with its classical and humanist allusions (evident in the Roman intaglio ring in the Jan Van Scorel painting) and stoical preoccupation with beauty and death, the fragility of wealth and status and brevity and transience of life.  The same preocupations are present in Michel De Montaigne's essay, 'On Solitude' in Screech's translation below published in the Penguin Classics selection from 1993.

We have lived quite enough for others : let us live at least this tail end of life for ourselves. Let us bring our thoughts and reflections back to ourselves and our own well-being. preparing securely for our own withdrawal is no light matter: it gives us enough trouble without introducing other concerns. Since God grants us leave to make things ready for our departure, let us prepare for it; let us pack up our bags and take leave of our company in good time; let us disentangle ourselves from those violent traps which pledge us to other things and which distance us from ourselves. We must unknot those bonds and, from this day forth, love this or that but marry nothing but ourselves. That is to say, let the rest be ours, but not so glued and joined to us that it cannot be pulled off without tearing away a piece of ourselves, skin and all. The greatest thing in the world is to know how to live to yourself. 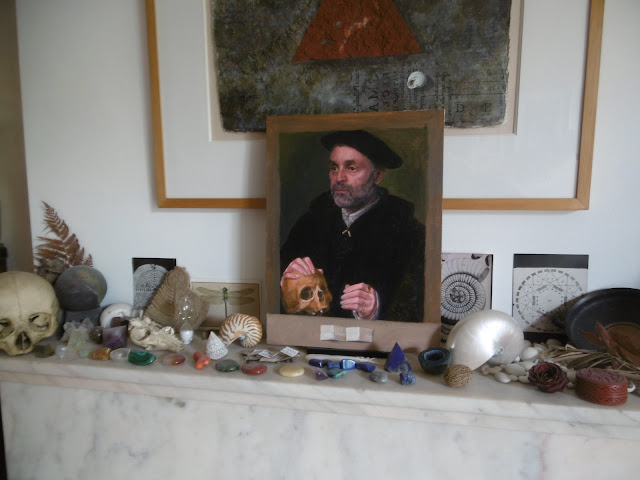 Posted by Alan Mitchell at 12:37 AM No comments: