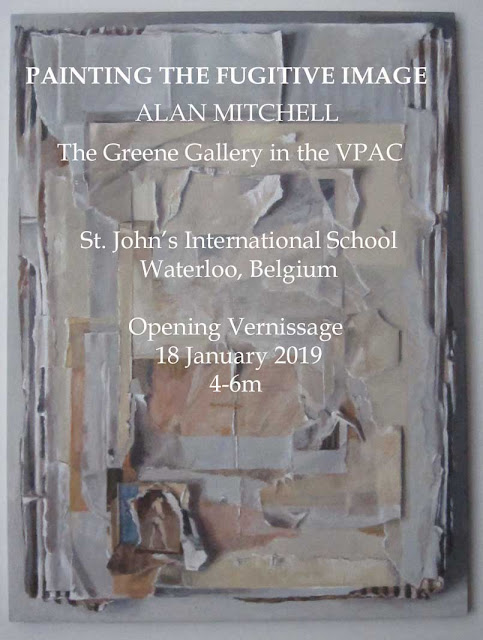 In Greco-Roman antiquity creating illusions of depth on flat surfaces by painting trompe l’oeil was a source of fascination and wonder to viewers. The painter seemed, through the alchemy of materials, craft and qualities of light and colour, to be able to capture a mirrored reflection of visible appearances that resembled an almost tangible reality. Somehow, as if by magic, the image preserved the fleeting moment, whether it was the freshness of a young face or the bloom of flowers or fruit, and fixed it, sometimes for generations, giving it the illusion of permanence if not actual immortality.

The work of art- the image itself- was of course made of materials that were subject to change and decay. Paint on plaster, wood, paper, clay and even stone are fleeting and fugitive and ultimately fall apart, fade, break or become fragmented, lost or destroyed. The ephemeral, transient and impermanent nature of these ancient civilizations was itself a subject of art from the Renaissance till the 19th century and fragments of broken statuary and the overgrown ruins of once powerful empires were subjects for Romantic and Neo-Classical artists which contained important philosophical and moral insights considered worthy of contemplation by later generations. ‘Sic Transit Gloria Mundi.’

The invention of photography in the early 19th century enabled artists to fix with greater scientific accuracy and new technological skills the fleeting moment and this in turn supplemented and informed the artist’s eye altering the focus of painting and perhaps even its traditional illusionist function. In the 20th century film and photography have created evermore convincing mirrors of reality until today we are surrounded by a veritable electronic and digital ‘hall of mirrors’ that includes holograms of sound and light that can create illusions of existing things and aspects of our lost past in seemingly solid reality.

My painting is concerned with the ephemeral nature of pictorial illusion as well as the nature of the reality depicted. It is an elegy to the fragile surfaces on which illusions exist as simulacra. Using collage as an integral part of the process I work from direct observation in oil paint, acrylic and mixed media on paper, board or canvas. Evoking the tradition of trompe l’oeil I try to find a melancholy beauty and poetry in the transitory nature of small things; fragments of photographic images, torn or crumpled paper, butterfly wings, a shell or a feather. I search for the gap between reality and illusion in the forgotten or ignored margins of the paper, the frayed edge of the image where the picture meets the frame, in the neglected corners of the room, offstage behind the scenery after the performance rather than in the full glare of the theatrical spectacle.

If, as Kepler says, vision itself is a picture, then understanding the nature of pictorial illusions is key to understanding reality itself.

The Vietnamese Buddhist monk Thich Nhat Hanh has said that things in their true nature and illusions are of the same basic substance. Could painting therefor be a useful tool for contemplating the ultimate as well as the conditional nature of reality? I will leave the viewer to decide for themselves.