The 'Faces Then, Faces Now' exhibition at the Bozar, which I visited on the 10th February with 30 students and two colleagues, made the personal and emotional experience of time and space tangible in the contrast between the selection of contemporary European photography since 1990 and the smaller collection of Renaissance portraits from the Low Countries.

Polish photographer Adam Panczuk's series of large black and white photographs entitled 'Karczeby' struck me as particularly evocative and powerful.  Karczebs, according to his website,  http://adampanczuk.pl/ is both the dialect of this region of Poland as well as the people who have farmed it for generations. These strange surreal, scarecrow like figures were posed centrally within the square format of the picture between the sky and the earth, rooted as it were, to the ground with iconographic attributes suggesting their ancestral connection to the soil. 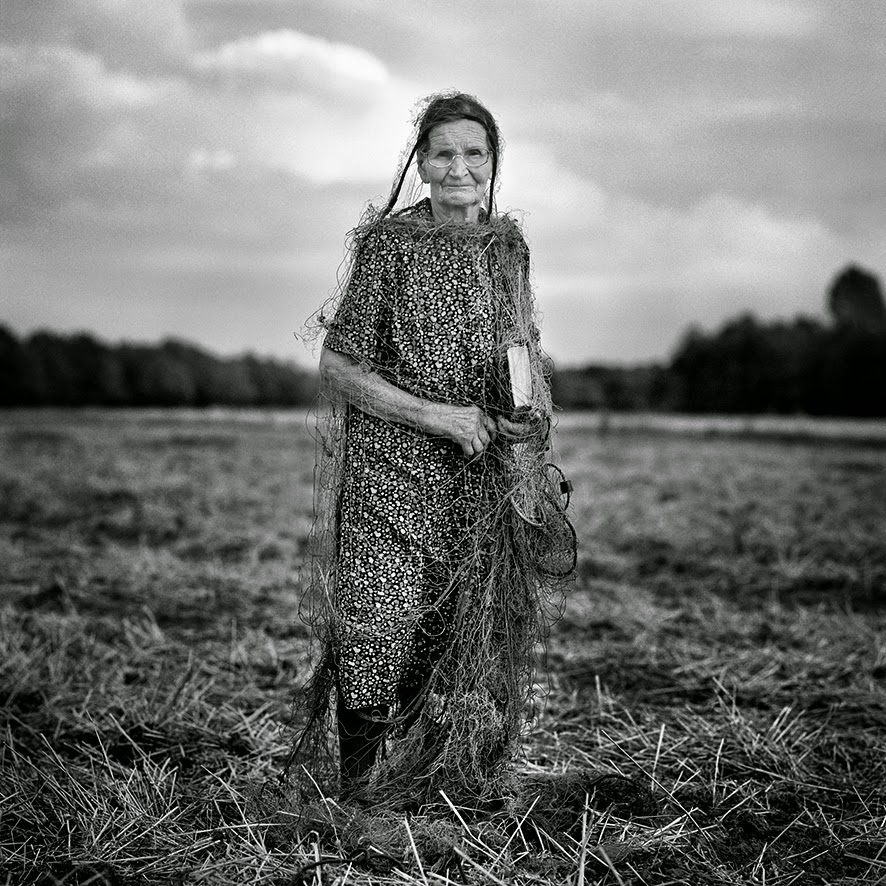 This relationship between the realistic image of an individual face and person and a particular place, suggested by trees, houses, churches or landscapes with rivers or mountains, like in the self portrait of Simon Bening below, whose gaze and gestures suggest an existential awareness of time, past, present and future, was also clearly an important element of portraiture in Northern Europe in the Renaissance.

These often very real painted illusions, small worlds, entire and self-contained, set within the mirror like frame and its referents, like continuing events create a set of visual co-ordinates that help us to map our own cultural and emotional memory across the centuries always, paradoxically, within the present moment.

Our ancestors carefully chose the optimal moments of their lives to be painted. This was not a cheap or easy thing to have done in the 15th, 16th and 17th century and only really an option for the elite. Whilst they presented themselves looking their best as potential lovers, or as respectable, prosperous and well established individuals or thoughtfully reflecting on the vanity of this live and the inevitability of the next with objects of memento mori, we in a more democratic age, when the projected self-image is ubiquitous and inescapable, seem to kaleidoscope thoughtlessly through a hall of digital mirrors recording our every impulse of vanity in instant fragmentary moments self-gratification and self-affirmation posted in the electronic ether of the virtual architecture of our unlimited desire

Apart from the jewel like realism in the skilfull rendering of fabrics and flowers and the strange impassivity of the faces of the main characters in this quiet drama, what struck me was the way that we can read the operation of space and time within the painting and its conventions of representation. The main episodes of the story of St Lucy's life all take place simultaneously within the same frame separated only by the fragile emblazoned trompe l'oeil columns that  divide the narrative into sections like a cartoon strip read chronologically from left to right, suggesting both interior and exterior spaces, rather like I suppose theatrical staging might operate in a mystery play or a performance in Shakespeare's Globe.

The two details below offer us windows into the depth of the picture and through time and space, bringing back to the present moment. The door is both a real and symbolic threshold between worlds, framing the walled garden and suggesting both the mysterious and perhaps unknowable city and the country on the horizon hidden behind the furthest door. The frame of the picture is the threshold from our own real world of the present into the convincing illusion of the tangible and symbolic world of the past both observed and imagined by the artist.

The second detail shows the still recognisable tower of the Onze Lieve Vrouwekerk bringing us back to the familiar and knowable present via a landmark which we can still locate in our real experience and making us still active participants in this visually re-imagined story of a virgin martyr from late antiquity, full of virtue and violence, money and power, sex and death, continuing to unfold for each generation in the picture before us. 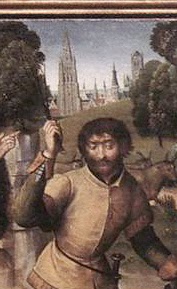 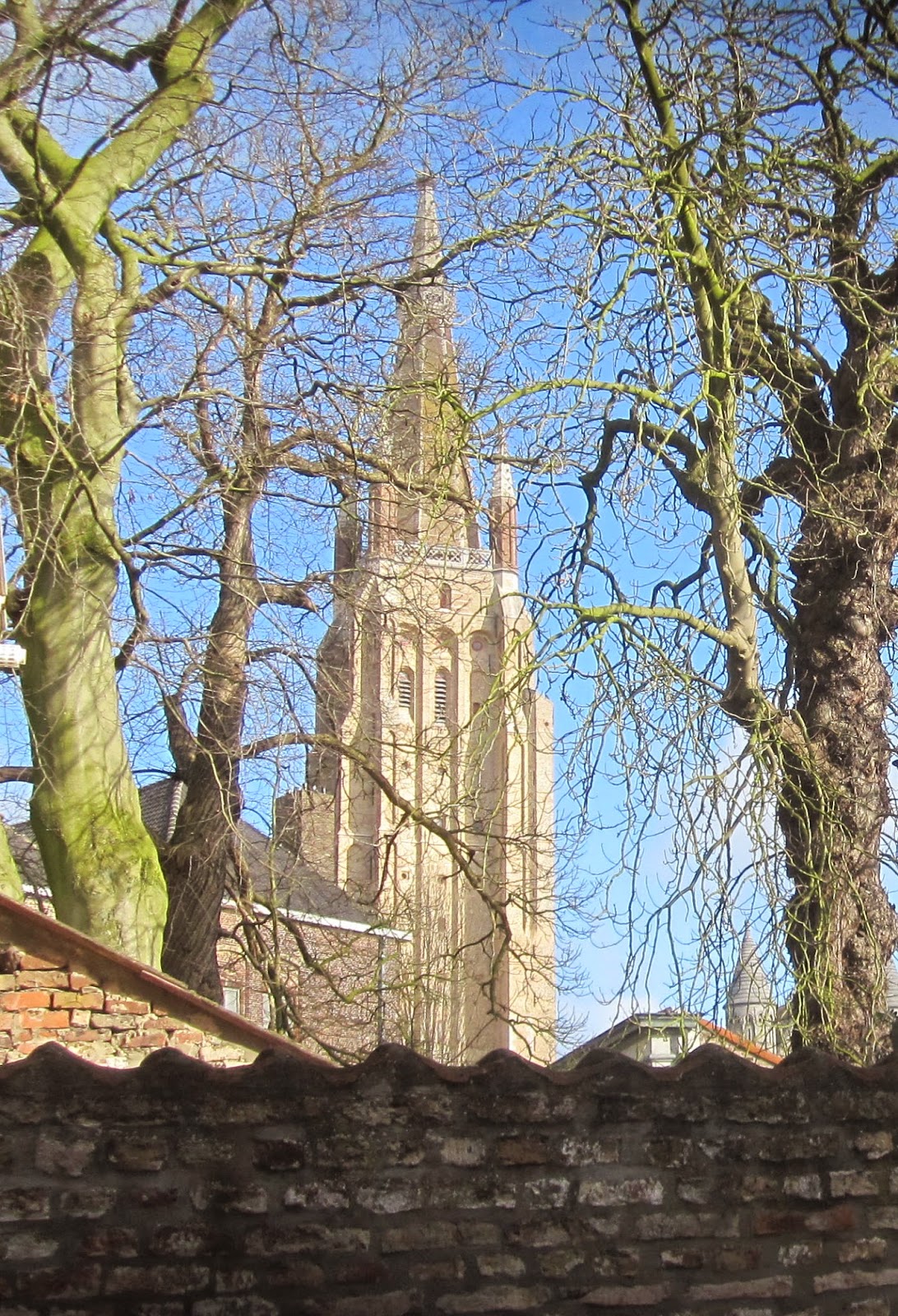 As soon as we imagine it the anticipated future is upon us in the immediate present and the moment we are conscious of it in the present it is already in the past.  Only images, places and things which outlive us with their longer cycles of growth and decay seem to fix or even transcend time, giving the illusion of stability, but these too are fragile and transitory, subject to the same uncertainty of flux and change and inevitably they too will eventually fade and disappear.

In the mean time they are a comforting contingency ........

Posted by Alan Mitchell at 10:00 AM No comments:

Horace and the economics of sufficiency.......

I first read Horace's odes at school but have enjoyed re-reading his Epistles on the train recently on my daily commute in David Ferry's excellent bilingual translation published in 2001.  Total self sufficiency is perhaps an impossible dream for most of us as our lives are interconnected and interdependent with everything else in multiple and complex ways but the sense that there is an optimal 'economics of sufficiency' supported by right attitudes of mind and heart is worth cultivating if it 'brings tranquillity' and 'makes cares less'.

......Where is it virtue comes from, is it from books ?
Or is it a gift from Nature that can’t be learned?
What is the way to become a friend to yourself
What brings tranquillity? What makes cares less?
Honor? Or Money? Or living your life unnoticed?
Whenever I drink from the cold refreshing waters
Of the little brook Digentia, down below,
Our local hill town, what do you think I pray for?
“ May I continue to have what I have right now,
Or even less, as long as I am self-sufficient.
If the gods should grant me life, though just for a while,
May I live my life to myself, with books to read,
And food to sustain me through another year,
And not to waver with the wavering hours “
But Maybe it’s enough to pray to Jove ,
Who has the power to give and take away,
Simply for life and for the means of life;
I will myself provide a steadfast mind. 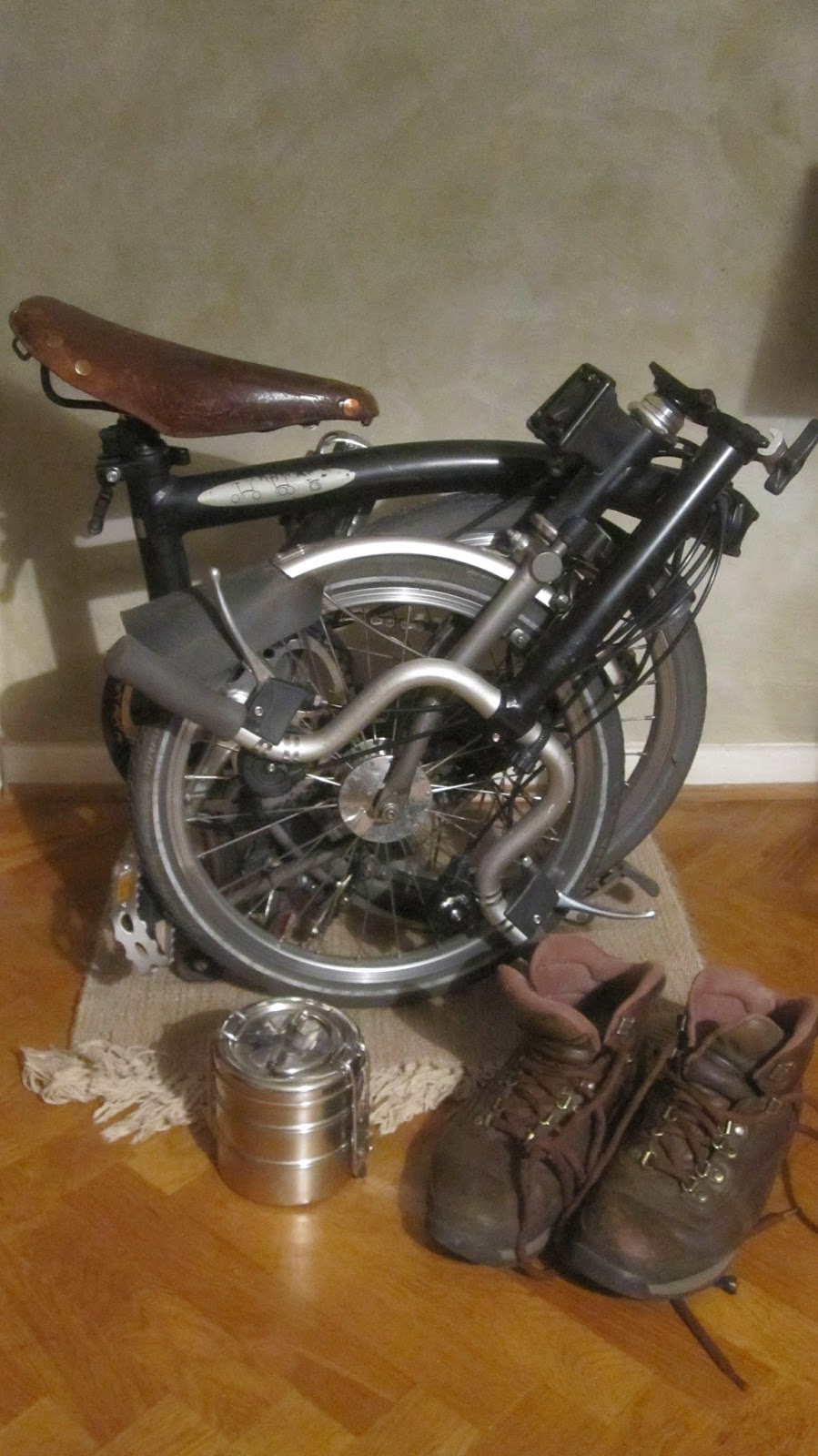 This week the bicycle, the walking boots and the lunch box have with the support of the tram, the train and some very nice friends with cars helped me to be self-sufficient in various ways with regard to food and transport,   but without inter-dependence we could not function independently and without friendship we could not enjoy the pleasure of shared delights like this walk in the snow in the Ardennes on Sunday with Alex. For all his Stoic philosophy Horace had enough self deprecating humour and self-knowledge to admit his human failings and was worldly wise enough to enjoy the good things if they came his way even whilst preparing himself psychologically for the uncertain and unreliable in life and its ultimate inevitable end. 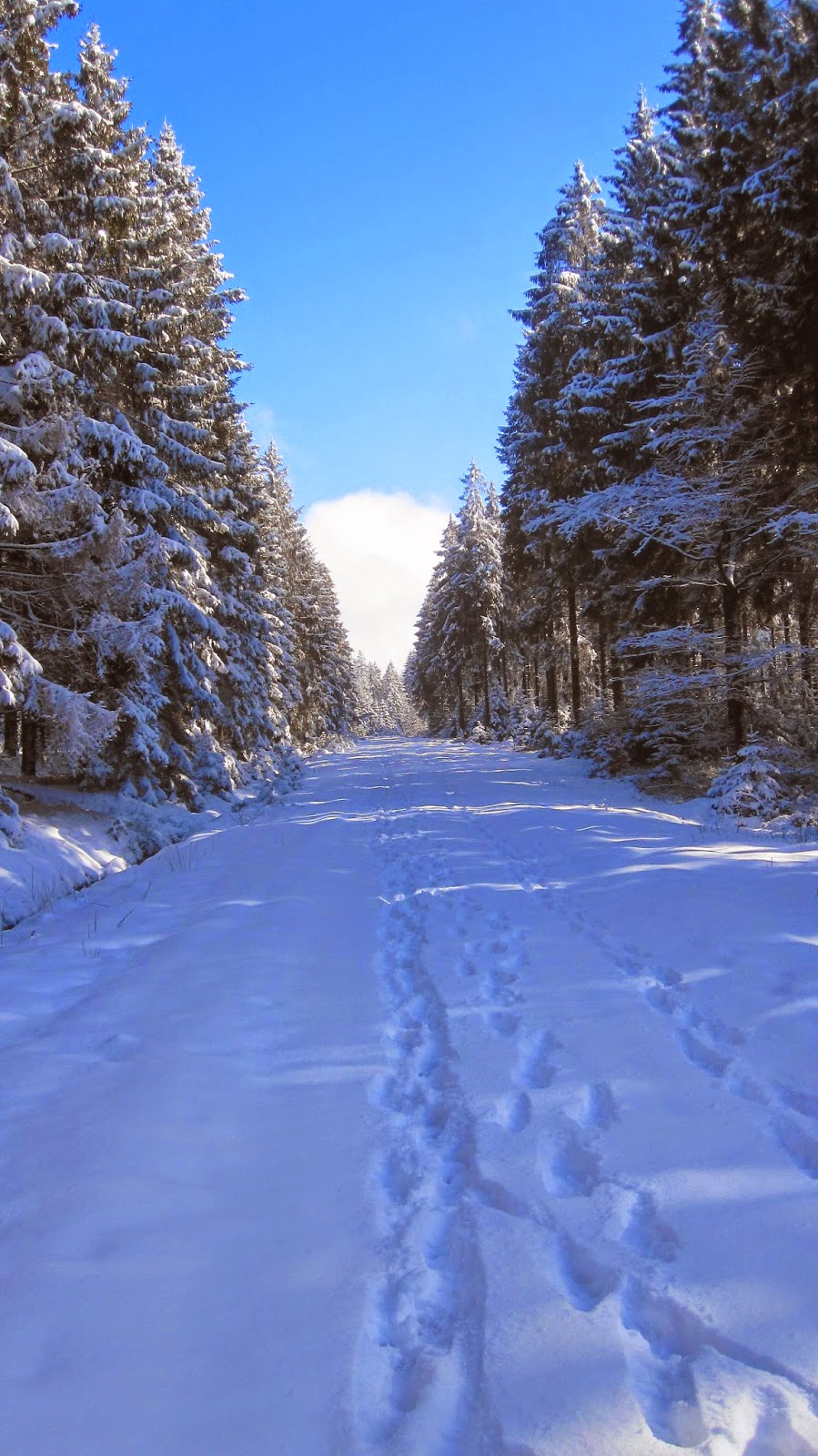 Posted by Alan Mitchell at 11:51 AM No comments: