Art and Migration at the Egmont Palace

Thinking about swallows in my previous post I was intrigued to see a small but powerful exhibition in the perhaps ironically or incongruously elegant and sumptuous grand staircase of Egmont Palace today on my way back from a shopping trip. Exploring the themes of Art and Migration it was called 'Textile-Ile' and was based around four 17th century Brussels tapestries which hang in this space and which represent the four continents, Africa, Asia, Europe and America

There were two video installations: Jean Factory by Turkish artists Ali Kazma which its syncopated  rhythmic movements of interaction between humans and machines on a production line recalled for me the dehumanising conveyer belt sequence in Charlie Chaplin's 'Modern Times' from 1936  but with non of the humour and slap stick - just a lyrical stark realism.

Hans Op De Beeck's 'Dance' was a powerful and moving choreography featuring a large group of people acting out a series of dance like ordinary and archetypal gestures that evoked the patterns on textiles and the movement of crowds through airport migration controls but also suggested darker and more disturbing memories of possible death camps reminiscent of Christian Boltanski's photography and installation. Beautifully filmed and choreographed, almost like an Anne Theresa de Keersmaeker, with an equally haunting sound track, this video was the emotionally charged highlight for me of an unexpected encounter during a routine shopping trip to Brussels.

Posted by Alan Mitchell at 9:16 AM No comments:

Genius Loci and the roundness of things.....

A and I are just back from Italy and exploring around Lago Maggiore. Where we stayed in Mergozzo next to the Lake, there is an ancient Elm tree that has occupied a central location in the village square and at the heart of the community for over five hundred years.

In Macugnana, just below the Monte Rosa Massif, we discovered an old lime tree that was already a hundred years old when the 13th century church, with a grave yard filled with the much more recently interred, was built next to it. Both trees seemed to represent for the human communities that have grown up around them, like children around a benign grandparent,  a sense of place, of being rooted between sky and earth in time and space across the cycles of seasonal growth and decay, birth and death.

For My 50th birthday I received from my brother 'The New Sylva. A discourse of Forest and Orchard Trees for the Twenty-First Century' by Gabriel Hemery and illustrated with Sarah Simblet's wonderfully expressive and precise pen and ink line drawings, some of which we saw last August, in the art and anatomy workshop at the Ruskin.

In Rilke's poemes francais, this is how the walnut tree lives and commands attention. Here, again around the lone tree, which is the centre of the world, the dome of the sky becomes round, in accordance with the rule of cosmic poetry. On p. 169 of this collection we read:

Needless to say, all the poet sees is a tree in a meadow; he is not thinking of a legendary Yggdrasill that would command the entire cosmos, uniting heaven and earth, within itself. But the imagination of round being follows its own law: since as the poet says, the walnut tree is "proudly rounded", it can feast upon " heaven's great dome." The world is round around the round being.

The swallows or hirondelles, who return each year to their nests in Mergozzo, gave wonderful daily performances of syncopated rhythmic diving and swooping over the lake.

Posted by Alan Mitchell at 8:41 AM No comments:

Visited Bruges today with the bicycle - the best way to get around - to look at various properties and explore the quieter corners of this city whose organic circularity and winding streets and canals resemble a veined cell or leaf structure and recall for me the concentric circles and squares of a Tibetan mandala or the rings of a tree. Time and space kaleidoscope self consciously in layers of superimposed histories packaged for present day consumption but despite this it is still possible to trace meaningful patterns in the city's form.

In his book 'City and Cosmos' The Medieval World in Urban Form, Keith D Lilly argues that the city's geometry embodied a cosmological significance.

'The cosmological symbolism of the compass was thus widely understood in the Latin West in the Middle Ages and surely gave earthly users a sense of its symbolic significance and meaning to their own design work.  Like the measurer's tools - the quadrant and astrolabe- the geometer's compass imitated a macrocosmic geometry, reproducing on earth what is in heaven.'

Within the maze or labyrinth of the city's streets there are still many odd corners of distilled silence and enclosed space whose interiority contrasts with the outward display and pageant of the more public and crowded places. The chapel of the English Convent in Carmelietenstraat has an arched apsidal structure below its unique dome, that encloses a smaller domed marble altar which has itself an arched niche, which encloses a statue of the virgin (the vessel which encloses, frames and reveals Christ ?) echoing the larger dome and niche that frames it, like a series of ever diminishing Russian dolls each one enclosed inside another. 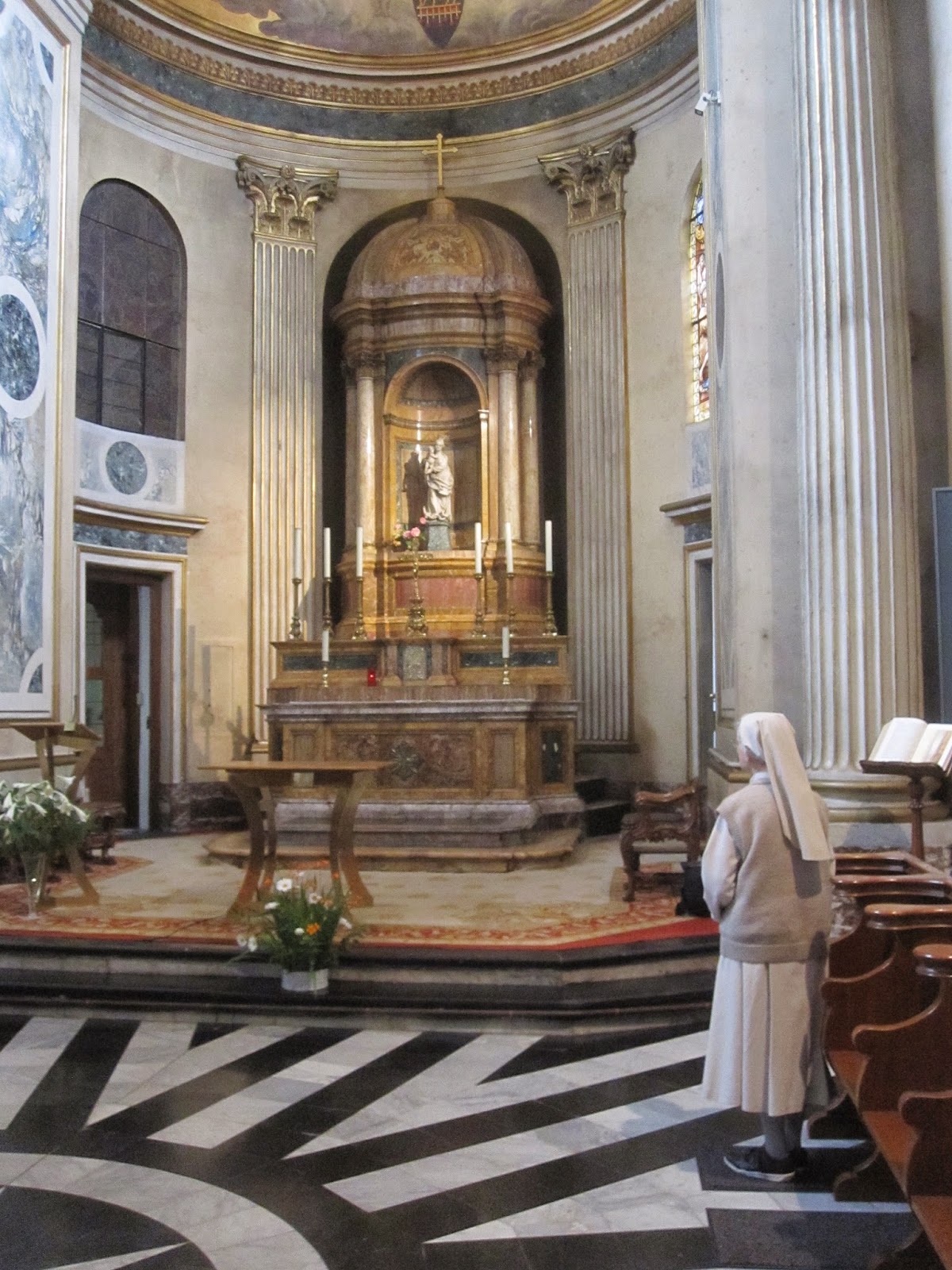 I was lucky enough to have Sr. Frances as a guide.

Posted by Alan Mitchell at 4:38 PM No comments:

Visited Mathieu Weemaels today to plan the visiting artist's show for next October in The Greene Gallery at St John's.

We had an interesting discussion exploring themes whilst selecting works for the show. 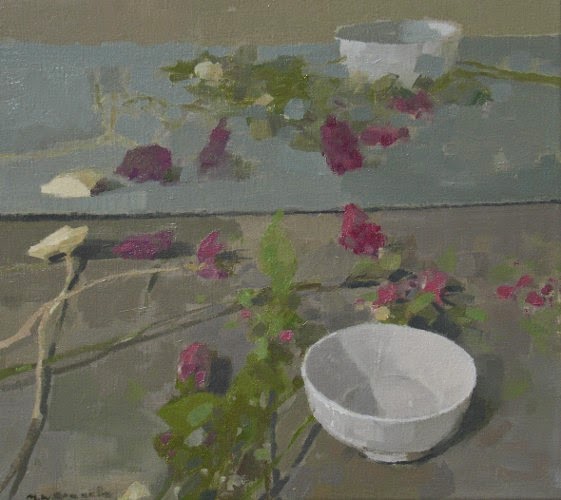 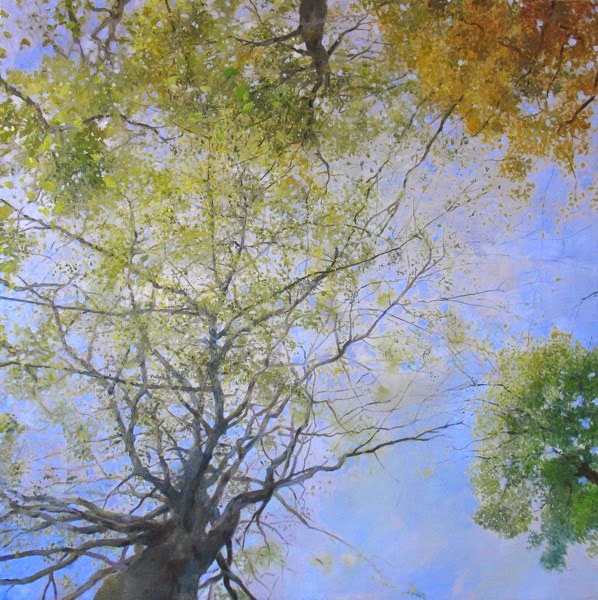 The recurring mirror motif provides the illusion of an extension of space forwards into the depth of the painting while simultaneously seeming to reflect back into the apparent space of the viewer. At the same time the rectangular frame of the mirror and its flat surface is a metaphor for painting itself as an illusion of reality. In these reflections on interior and exterior space the artist and the viewer negotiate  open and closed forms. The rounded tea bowls, bottles, jars and strewn flowers on tables or chairs and the light from an open window or door, all suggest or imply the human presence.  The balance of complementary colours and carefully calibrated muted chromatic greys and browns frame the occasional sparks of intense colour which focus the eye in the dream like soft contemplative silence of the abstracted geometry of these related forms in space.  Single tea bowls, suggesting the intimacy of cupped hands, progress to more complex compositions in which the relationship between various elements and motifs, suggesting a metaphysics of time and space, are explored in series. In the larger paintings the great dome of the infinite blue sky seen through the branches of the tree canopy seems to be the very antithesis of the small white bowls whose finite form is defined by the same emptiness.


Posted by Alan Mitchell at 7:59 AM No comments: