Last Sunday afternoon I went to the opening of 'Between Earth and Heaven II'  A tribute to Willy Van Den Bussche at the Huis  De Lombard in Langstraat in Brugge.

The range and quality of this intensely tactile work carefully curated into different rooms and spaces in the decayed splendor of this grand Herenhuis was really astonishing and powerful tensions and symbiotic relations were variously calibrated throughout between art and context, old and new, growth and decay, death and desire. Rather than a white modernist clinical 'laboratory' or a gallery that preconditions one to a certain kind of expectation of aesthetics, the empty but charged rooms of this mansion with their heavy decoration and sense of presence/absence added to the disturbing beauty of many of the works and a pervasive feeling of 'vergankelijkheid' or transience.

Frans Gentils, ' Halewyn Service' looked particularly the part in what could have been a decadent dining room. Its chillingly contemporary demonology based on an old Dutch folk tale explores the nature of evil which resonates today with as much force as it must have done in medieval times. 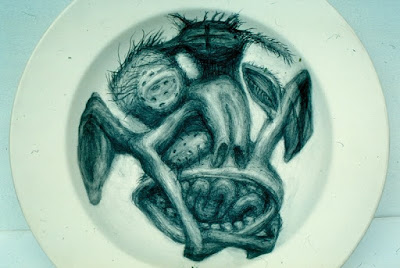 In keeping with these existential preoccupations on 21st May am planning to hear Sonia Prina and Robera Invernizzi at the Concertgebouw in Brugge singing duets by George Friederich Handel, Antonio Lotti and Claudio Monteverdi on the theme of 'Amore e Morte'. Despite non-visual non-material nature of sound it is still felt in the body with an intense physical awareness.

On a sunny Sunday afternoon over this May weekend it was delightful to meet up again with Leon de Bliquy and Annie Vanhee. Several years ago I worked with Leon to set up student workshops and to curate an exhibition at St. John's Gallery after he was in Belgium temporarily from South Africa in an exhibition entitled 'Odyssey'. I was impressed both by his use of curious personal mythological motifs, rich, colourful tempera palette and exuberant and dynamic gestural marks. Since then Leon has settled in Ostend and his gradual loss of sight is the big change but despite this both his mind and spirit remain open and unbounded. We plan to work together on an return exhibition in St. John's Greene Gallery featuring the last works he made before the loss of sight, a series of paintings of 'jesters' with related poems in Africaans and English in the spirit of Erasmus's 'Loft de Zothied'

Change and uncertainty are hardwired into experiential reality. 'Ars Longa Vita Brevis' but despite this Latin saying even art itself is transient. My own last works have been as much about the nature of how images themselves decay and fall apart even as they try to arrest time and capture it for posterity. Sight and insight are connected but like Gloucester in Shakespeare's King Lear it is only when he looses his eyes that he sees clearly.

I was surprised to find this mural I painted on the wall of my room in school when I was 16 years old, photographed and posted on the internet after 37 years on a site dedicated to decayed buildings.