Ascetic Aesthetic in Spain and Flanders


The exhibition just opened of Spanish Baroque painting and sculpture, which I saw this weekend, features this imposing and psychologically charged painting by Zurbaran. The warm, muted colours and dramatic light and shadow, and the arching curve of the figure and counter curve of the skull hands and face in the composition add a brooding intensity to the existential dilemma it poses like an insistent question. The rich attention Zurbaran lavishes on these sensual and aesthetic qualities; the precise tactile nature of the patched robe, its weight and thickness and the subtle modelling of its surface texture, carefully rendered over the the contours of each fold with directional brush marks, is in contrast to its evident physical and symbolic embodiment of the principles Franciscan poverty and simplicity and the meditation on death.  This representation of an ascetic is also a visual essay in 17th century Spanish aesthetics- a kind of Franscican 'wabi sabi'. Derived from a traditional Japanese Buddhist approach to life Wabi Sabi expresses an inherent transient and imperfect beauty evident in natural materials, object and processes defined by a rough simplicity, modesty and austerity. 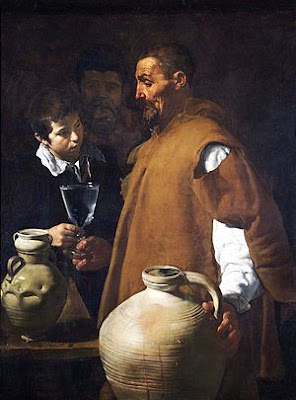 The Zurbaran St. Francis reminds me of Velazques' famous 'Waterseller of Seville' at Apsley House painted a little earlier in 1618-22. Although not a religious painting it shares the same frugality of subject matter, a similar muted colour scheme of earth tones like raw umber, yellow ochre, stark light and shadow, realistic rendering of material surfaces and an elemental and dignified attitude to poverty and simplicity. One has the same sense of the artist's intense gaze and loving attention to very precise tactile and visual qualities of ordinary and even poor everyday objects and surfaces revealed by strong directional raking light.

The Belgian art collector and designer Axel Vervoordt, who also appreciates the quality of light on different natural surfaces, has explained his philosophy of 'Wabi' in many articles and books. Writing in the New York Times Style Magazine in 2014 in an article entitled, 'The Luxury of Humility', David Netto quotes him below:

The costs of achieving this kind of minimalism are eye-watering, and seemingly inconsistent with its mission of aesthetic humility. He explains that this is a kind of luxury for a select few: “The Emperor of Japan had a wabi garden. Wabi is for people who already have a lot.”

It is a 'rich' paradox that poverty and simplicity should cost so much time and effort but then; 'there is more simplicity in a man who drinks champagne on impulse than eats grape nuts on principle'

Posted by Alan Mitchell at 5:24 AM No comments: