Deconstructing 'self ' - Sophie Calle and the art of celebrating birthdays

Following a workshop exercise last week in school in which we were required to place a miscellany of four small things in an anonymous brown paper bag to represent our 'selves' to the others in the group who had to guess to whom they belonged, it struck me just how contingent on changing situations and contexts our perceived identity is in any given time and place, not a fixed or permanent essence that can be easily pinned down or reduced to one or another thing.

How much it is individually and socially negotiated; constructed out of expectations projected by others onto the roles we are given to play as much as our own preconceptions and the qualities we bring to bear at the significant moments we are called on or feel the need to define 'ourselves'.

Clearly we experience physical, emotional and mental changes internally and externally in the life cycle of our own bodies and the environment as they grow and age - nothing stays the same for long. We inherit so much from the actions and intentions of others before we were born and nature and nurture shape us long before we take ownership consciously of our own conditioning actions.

All of this reminded me of Sophie Calle's 'The Birthday Ceremony' collections of gifted objects showcased in glass cabinets or her 'L'Hotel' series in which she assumes the role of a voyeuristic hotel maid who constructs the identities of the temporary occupants of the rooms she is cleaning, like a detective, from the physical evidence they leave behind. Concept, performance, installation, photography and text all play significant roles in the way she curates and presents the relationships between the public and private domains of the viewer and the viewed, framing the way we see and perceive the artificial 'realities' she constructs.

Italy, Flanders and the poetry of decay

Back from Italy after a short holiday with 'A' and already preparing for another hopefully creatively fulfilling academic year in Waterloo, Brussels and Bruges. When Pieter Bruegel the Elder traveled to Italy for the first time in 1552 crossing the French Alps on his outward journey and returning via the Tyrol and Switzerland in 1553 he made drawings of a landscape that was the diametrically the opposite to the Low Countries from which he had come. One can imagine how much more profound this experience would have been when the journey must have taken many months on horseback rather than just a day in the car. Time and space are relative and conditional experiential realities. Breathing and walking in the mountains, with their massive seemingly architectonic rock faces, challenges body and mind to find an equilibrium relative to what is large and open rather than small and enclosed in scale and proportion.

Apart from the pleasures of swimming, eating, walking and browsing old books (I managed to see and handle a lovely early printed edition of Ovid's Metamorphoses from 1551 at Studio Bibliografico Benacense, illustrated with small woodcuts like the one below) - 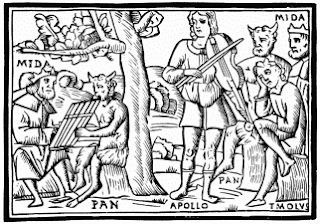 - Italy seemed to me to generate a veritable industry out of the 'poetry of decay. Antique broken statues and 21st century torn and patched jeans have all the impractical fashionable desirability of the romantic ruins that fascinated 18th century grand-'er' tourists than us, the mass consumers of a pre-packaged globalized travel industry. Surely this inversion of value adds a layer of irony to the seemingly irrational logic of markets that seek to exploit the luxury of designer poverty. Such ironies are not perhaps new.  The elevation of the impoverished and decayed to high status and value has had many patrons in Italian history not least amongst them St. Francis of Assisi who certainly created a poetry, both religious and aesthetic, from renunciation. 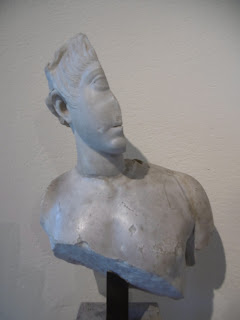 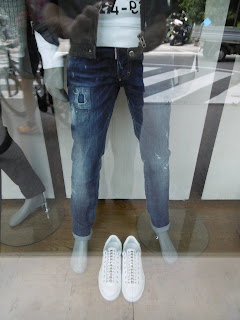 
My own effort at attempting to create a visual poetry of decay, with trompe l' oeils oil paintings of torn paper and broken and damaged photographs, confirms that inner and outer worlds of experience are somehow aligned.

Italy also provided me with endless examples of the practical and visual qualities of lime mortar. The Roman Villa and Museum at Desenzano had both well preserved floor mosaics and a nice explanation of the various layers of lime mortar used to plaster its excavated walls 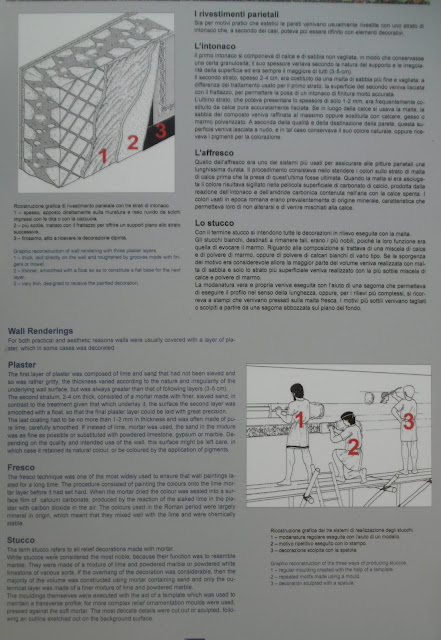 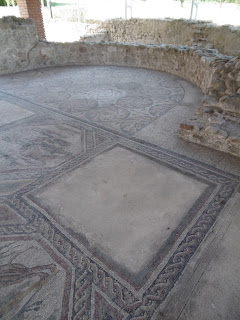 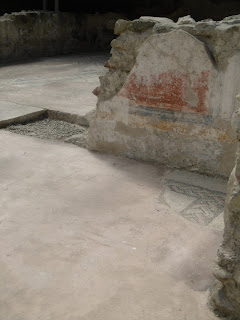 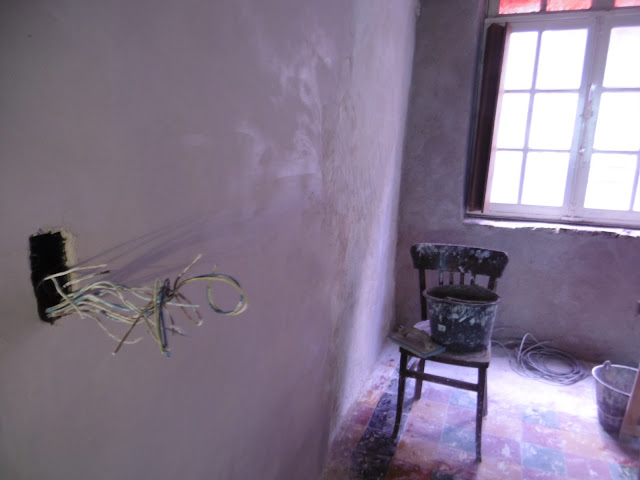 I spent a week of physically backbreaking work digging out the living room floor down 30 cm ready for the breathable membrane, expanded clay balls and lime-slab which P and I plan to put in place ready for me to lay the natural blue stone tiles which are currently stacked under the stairs. I made a nice polish with pure beeswax mixed with turpentine from candles that came from a monastery we visited in the Meteora in Greece a few years ago and tested it on the surface with pleasing results. I will use this traditional mixture on the natural stone floor in the living room and the brick floor in the hall when it finally gets cleaned and polished. I found a quantity of larger 'moefen' and other broken bricks which are from the middle ages and later at the level of the foundations all of which have been saved to use in the open inner court space when I make another external brick pavement similar to the one in the hall laid in sand with a little lime mortar, but first we need to fix the French drain, rainwater collection tank and create a removable leveling cover for the septic tank. 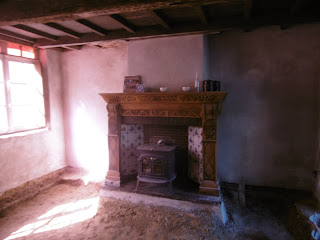 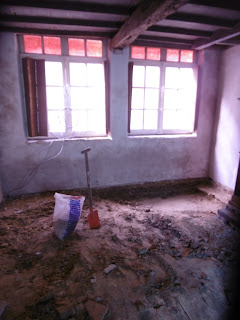 Outside I finished rendering the new kitchen and bathroom wall with a plinth to protect and visually unify the base and finished pointing and where necessary rendering the old wall opposite the kitchen window with a rough coat lime. Finally I was able to find exactly the right type of stone niche from a shop in Brussels on the rue Haute to provide a point of focus for this wall, connecting inside and out and aligning vertically and horizontally to the space. The stone niche originated as a small window in Rajasthan - the metal loops for a wooden shutter are still fixed in place. I find it brings a certain exotic theatricality, not out of place in gothic Bruges,  to the patterns and rhythms of the softened brickwork and animates the space with the flickering light of a candle, like an small external fireplace, contrasting and accentuating the natural colours of the sky and wall in the fading daylight.

Reading again the Dutch cultural critic Johan Huizinga's 'The Waining of the Middle Ages' in a battered old paperback edition I appreciated his ability to invoke and empathize with the experience of the pre-Modern mind. Certain insights resonate when they appear to be almost tangible realities.

"But one sound always rose above the clamor of busy life and, no matter how much of a tintinnabulation, was never confused and, for a moment lifted everything into an ordered sphere: that of the bells." 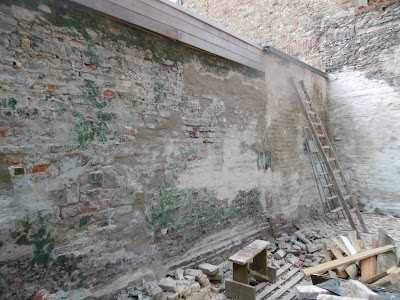 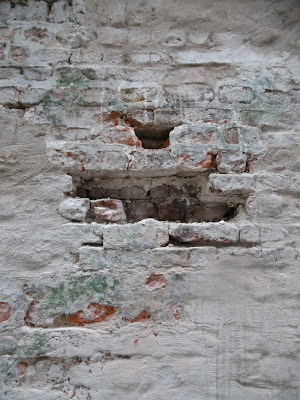 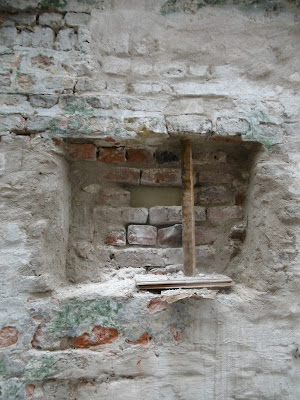 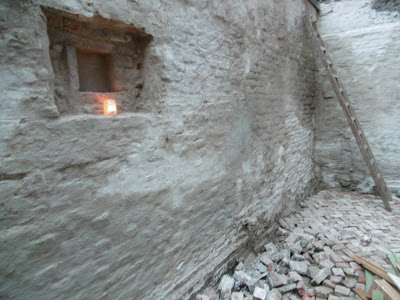 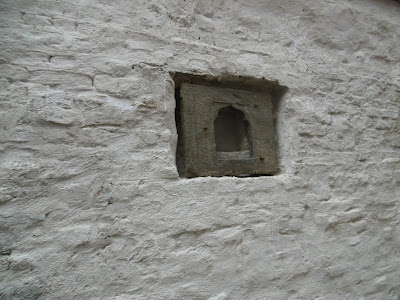 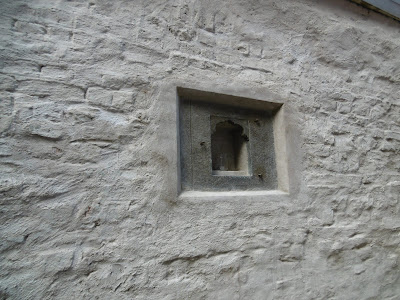 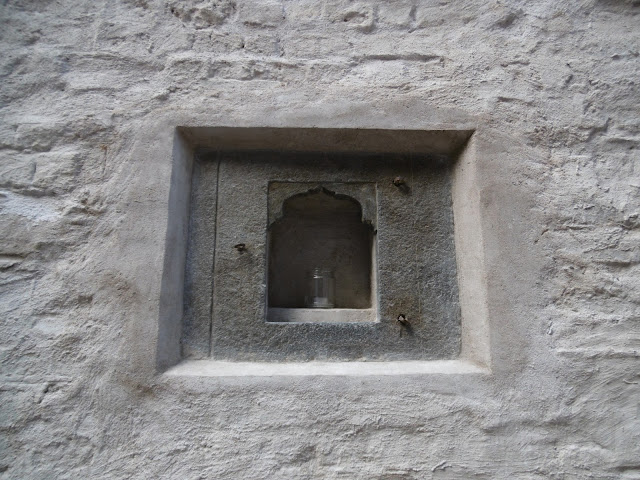 Posted by Alan Mitchell at 8:35 AM No comments: