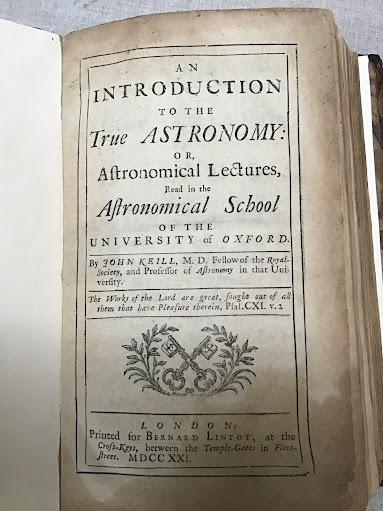 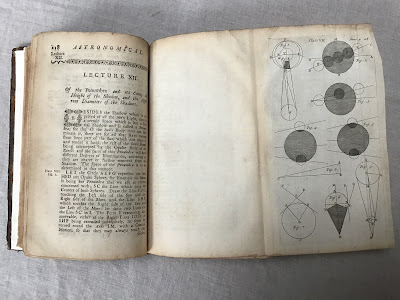 I recently discovered a very battered but complete first edition of John Keill’s  'Introduction to the True Astronomy or Astronomical Lectures.' from 1721, languishing unnoticed and uncared for in one of the shops along the Rue Haute in Brussels. John Keill was educated at Edinburgh university and studied under David Gregory. Keill taught Newtonian philosophy primarily through his major work Introductio ad Verum Physicam 1771, which was based on the series of experimental lectures on Newtonian natural philosophy which he began in 1694 at Oxford.  Although the original covers were detached from the cracked and loose spine on the edition I found, and they had linen glued onto them, the pages were complete with all the diagrammes and illustrations, including the remarkable map of  the moon. 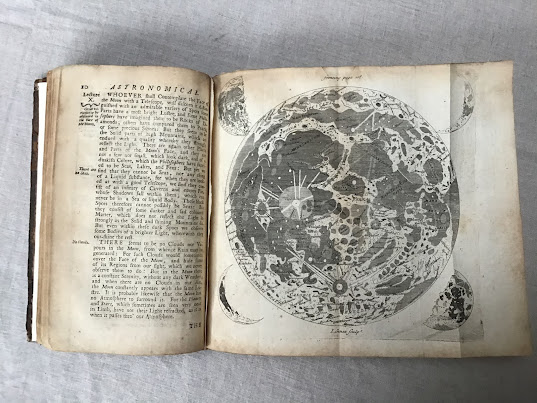 I was able to get the book to bookbinder Peter Doyle at the Worden Craft Centre in Leyland, Lancashire, England and he has expertly restored and rebound the book in matching leather, resewing the spine and restoring the original leather covers. Not only is the book stronger and therefor easier to handle and more comfortable to read, it should also last another 300 years. 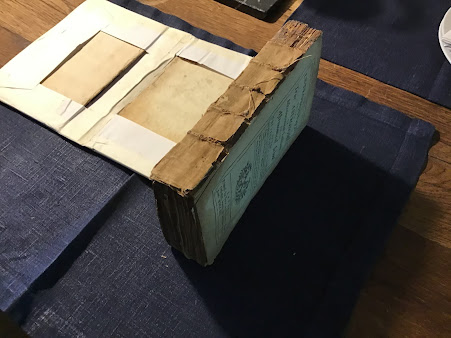 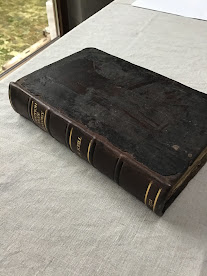 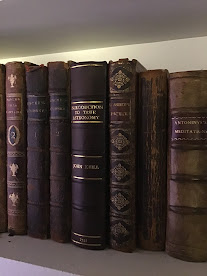 The worn leather of the covers and the stains on the paper reveal the passage of time which adds a further context to the content of the book. Rather than replacing the covers and disguising the repaired leather spine, it is neatly and visibly dovetailed into what remains of the scarred leather of the covers, which record the traces of time. This brings to mind the recent exhibition we hosted at school from the Gallery L'Arbre à Plumes in Brussels which featured the broken 16th and 17th century tea bowls repaired by Japanese master of 'kintsugi', Showzi Tsukamoto. 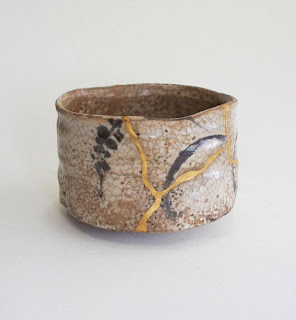 The Greene Gallery is planning a mini expo/workshop/discussion during October/November between students in scheduled classes and artists and gallerists Jean Vinclair and Barbara Dauwe, who will share in school, in a Covid secure way, some of their own practice and the work of both the European and Japanese artists they curate and exhibit in the Brussels Gallery, L'Arbre à Plumes.

The ongoing dialogue between the cultures and traditions of East and West has much to teach us about the beauty and fragility of life and the timeless existential realities that confront us in the present moment.

Take a look virtual online at the work of the artists in the gallery website below.

Take a look at the links below and explore the art of Kintsugi with Showzi Tsukamoto, a Maki-e master and a metal sculptor awarded by the LVMH Foundation. A tea master, he spent 50 years of his life studying Urushi lacquer, the Maki-e technique and traditional Kintsugi as has been done since the 16th century.

Kintsugi (金継ぎ, "golden joinery"), also known as kintsukuroi (金繕い "golden repair"),is the Japanese art of repairing broken pottery by mending the areas of breakage with lacquer dusted or mixed with powdered gold, silver or platinum a method similar to the maki-e technique. As a philosophy it treats breakage and repair as part of the history of an object, rather than something to disguise.  (Wikipedia)

‘The Cup is Already Broken’

“You see this goblet? “asks Ajahn Chah, the Thai meditation master. “For me this glass is already broken. I enjoy it; I drink out of it. It holds my water admirably, sometimes even reflecting the sun in beautiful patterns. If I should tap it, it has a lovely ring to it. But when I put this glass on the shelf and the wind knocks it over or my elbow brushes it off the table and it falls to the ground and shatters,  I say, ‘Of course.’ When I understand that the glass is already broken, every moment with it is precious”.

Mark Epstein from ‘Thoughts without a Thinker: Psychotherapy from a Buddhist Perspective

Posted by Alan Mitchell at 11:56 PM No comments: