These two previous works measuring 30x40 cms each are made in oil paint on a wood surface prepared with layers of sanded gesso. They prefigure the work I am doing at the moment based on carefully prepared paper and card photomontage/collages that I then observe directly as real still-life 'objects' in the changing natural light from a window on the right hand side. 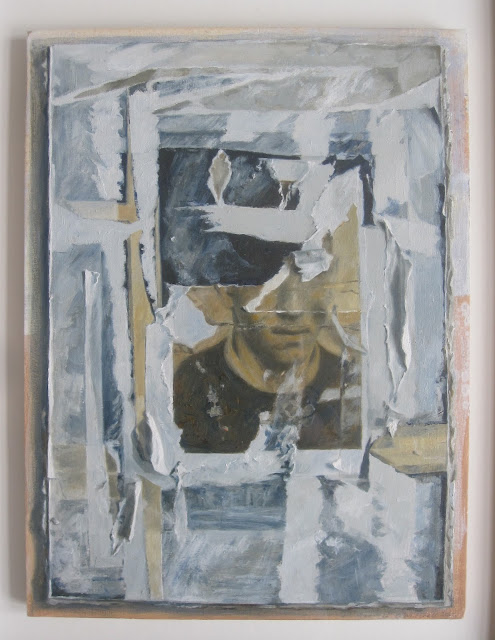 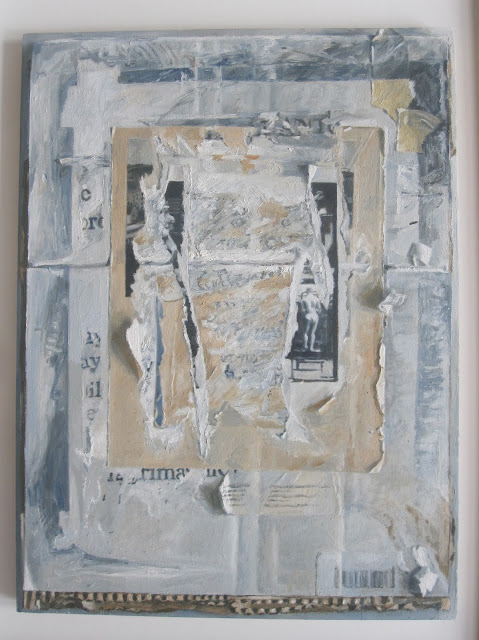 ......and below is a collage, fig 1 and the various stages of drawing, fig 2 laying a ground of acrylic colours and tones Fig 3 and 4  and then building up layers of oil paint in chromatic neutral tones by mixing complementary colours fig 5 and 6. these works remain unfinished and I am interested in keeping the paint appearing fresh and spontaneous so it still looks like paint and the marks can work as abstracted painted positive/negative spaces/shapes on close inspection.

Below is a triptych I made yesterday out of torn paper, photomontage and collage alluding to classical forms of architecture and human gestures and exploring the picture and the frame in relation to each other. I hope to be able to work from these in oil on wood when I get back from Italy - we leave tomorrow morning for Lake Garda.

At Easter we visited Naples and Pompeii.  I have borrowed some of the compositional formats, scales and proportions from the trompe l' oeil of walls, columns, dado rails, friezes, entablatures, doors, windows, and framed pictures painted onto the real walls of Roman villas -  walls imitating walls in both real an imaginary spaces..... 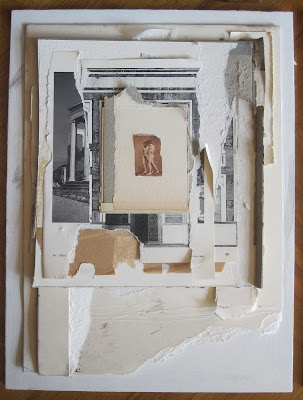 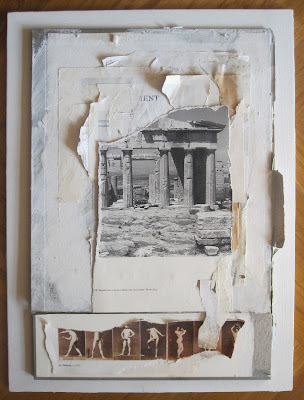 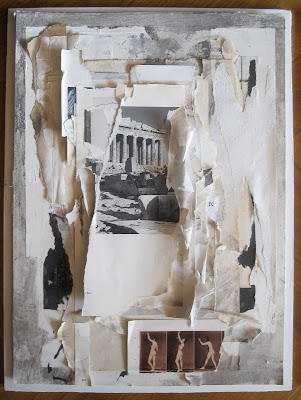 Posted by Alan Mitchell at 5:54 AM No comments:

Email ThisBlogThis!Share to TwitterShare to FacebookShare to Pinterest
Zurbaran.  The Sudarium of Saint Veronica (1658-61)

The miraculous impression of Christ's image on the sudarium (sweat cloth) or veil that St.Veronica, by tradition, wiped his face on during the passion is the original Christian 'icon', image or sign that stands as a substitute for the reality it represents through a likeness or analogy. Although not mentioned in the gospels the event itself is represented in the traditional pictorial scheme as the sixth of the fourteen Stations of the Cross.

Like the Turin Shroud, supposedly the cloth that the body of the dead Christ was wrapped in to be placed in the tomb, it seems strangely to anticipate the process of printmaking or indeed the much later science of darkroom photography with a transfer of an impression from one surface to another to create an image or likeness.

Zurbaran's painting ( he made about 14 versions during his life) is an image on a linen surface representing an image on another linen surface and is therefor as much an intellectual contemplation on the nature of image making, both human and divine as it is an act of pious devotion.

Both Christ, 'the word made flesh'  and Zurbaran appear to be 'artists' able to conjure or create 'miraculous' images on surfaces that are catalysts for powerful emotions in the mind of the devotee.  Christ's incarnation in a physical human body and the image of Christ 'incarnated' in painting have a miraculous 'materiality' and 'presence' in the absence of the actual body.  Zurbaran, through the miracle or magic of painting, brings the tension between material and immaterial, physical and spiritual worlds into a harmonious yet challenging synthesis, paradoxically re-incarnating the 'real' world in a 'true' representation, by fooling the eye with clever trick or tromp l' oeil. 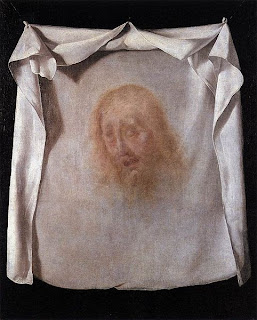 ' The trompe l'oeil pretends to be a painted surface behind which lies neither truth nor meaning, but solely the back of the canvas. If indeed, this is the only thing that  trompe l'oeil painting may tell us, then Cornelius Gijbrechts has reached the ultimate limit of painting as such in his work  The Reverse Side of a Painting 1670. This work presents everything that constitutes a painting: we see the wooden stretcher, held together by several nails that cast small shadows on the construction. The stretcher frames the back of a painted canvas, its frayed edges visible between the wooden slats. But where is the image?  Literally turning its back on paitning as well as on its viewer, this canvas tends to be its negative, a clear  instance of Baudrillard's statement that a trompe l'oeil is an anti-painting. If we follow our inclination to turn this canvas around in order to see what is represented on its front side, its hock effect would reside less in the deception, and more in the discovery that there is nothing there to see. Nothing, except for the same image front and back'

Posted by Alan Mitchell at 2:14 AM No comments:

The poetry of torn paper and other detritus 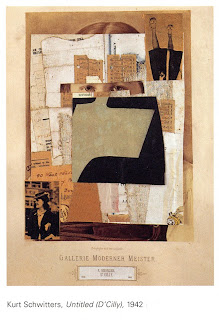 Kurt Schwitter's  'Merze'  collages made from the daily tide of paper detritus, odd bits of things that are washed up and snagged in our consciousness, stuff gleaned from dog eared magazines and forgotton bus tickets fished out from pockets, are an inspiration. All these carefully selected and composed fragments are evidence that beauty and meaning can be discovered in the most unlikely of places. This aesthetic of the ordinary and insignificant provides an important modern foundation for a playful 'art of poverty' charged with particular value and significance.

'The artist is a receptacle for emotions derived from anywhere: from the sky, from the earth, from a piece of paper, from a passing figure, from a spider’s web. This is 's web. This is why one must not make a distinction between things. For them there are no aristocratic quarterings. One must take things where one finds them.'

Posted by Alan Mitchell at 9:45 AM No comments: 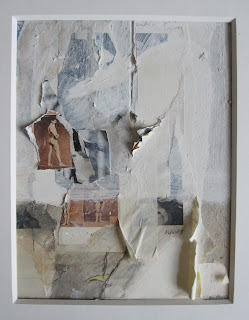 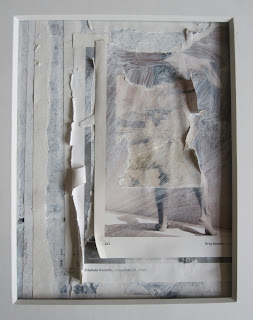 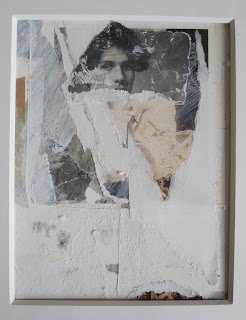 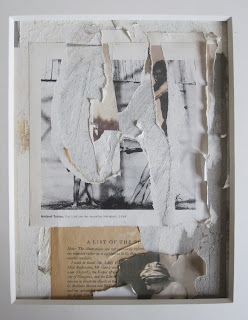 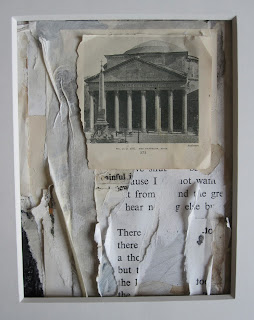 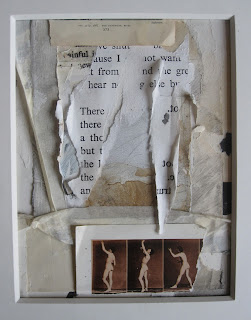 I am using a process of collage, photomontage, digital photography and a rectangular mount to frame compositions and investigate qualities of muted colour and tone, texture and the relationship between both 'picture' and 'frame'.

These variations on a theme of time and space play out small psychological dramas of memory and imagination that relate to the human body, history and art...........

It is difficult for me to establish in my own mind where in fact the actual 'picture' begins and ends since I suppose it includes the real frame and the space and context around it - including the format of the blog template and the frame of the computer screen when these photographs are uploaded.

I am interested in trying to both assert and negate the image by creating a simulated effect of time, decay and destruction.

These small collages can form the basis for further developments in trompe d' oeil painting - which of course changes everything. An oil painting of a torn photomontage is like a marble statue of flesh and folded cloth.

Usually the focus of the viewer's attention is the 'image' which is emphasised within the picture frame - I want the frame to be equally part of the image by painting it within the same shallow illusion of depth.

I continue to find the 'language of things' a compelling culturally specific and universal form of communication. Objects that are singled out for special display or consideration are seen and 'signify' both individually and in relation to each other and the spaces they occupy.  Most people collect or accumulate objects that tell personal stories or wider histories or are catalysts for memory or imagination. Natural objects or cultural artefacts, precious or otherwise, articulate a complex relation to the world of material forms and to our sense 'value' and 'values' in a personal exploration of interior and exterior worlds and meanings - they outlive us and connect across the boundaries of time and space and so function as memento mori - reminders of our own mortality, the brevity of life and ironically the vanity and folly of too strongly attaching to material things or being enthralled with impermanent states.

The painting by Frans Francken is typical of the genre with its self-aware, self referential representation in trompe l' oeil of small prints and paintings along with the cluttered collection shells and other curious objects of natural history and antiquities you might expect in 17th cen. humanist's cabinet. The painting is a representation of representation itself, framing frames of reference, both literally and metaphorically and setting up a critical dialogue with itself about nature, art and the individual artist and collector in a world of material and philosophical 'goods'.

My own impulse to collect objects that sometimes find their way into my work is also strong. Here are a few photos of my own current 'cabinet of curiosities' which includes the oil painting I am currently working on in in the floor space. 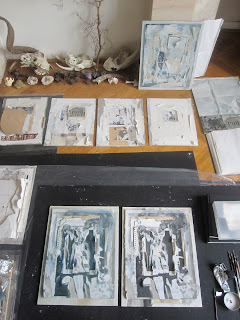 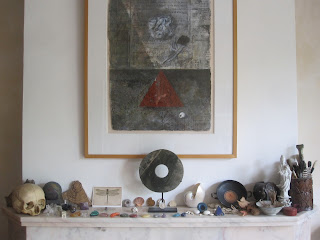 Perhaps the computer itself is the current version of the 'cabinet of curiosities', the laptop, the internet  and all the new forms of digital communication are the virtual but sadly non spatial, non tactile, non material 'wunderkammer' of the 21st century.

I discovered this site below which seems to be exploring similar ideas. 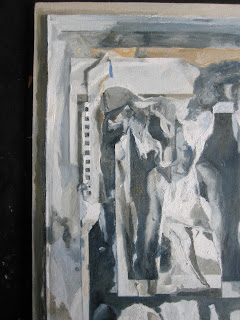 This is a detail of one corner of the oil painting on wood I am working on at the moment based on observation of a carefully prepared 'torn' collage.  I am using white, orange and blue to create the colours and trying to explore a rich resonance within a very narrow range and an illusion of depth in a shallow flat space.


Posted by Alan Mitchell at 5:21 AM No comments:

Email ThisBlogThis!Share to TwitterShare to FacebookShare to Pinterest
Have seen the Georgio Morandi exhibition at the BOZAR in Brussels twice in the last few weeks and continue to be fascinated with his muted chromatic greys made from complementary colours, carefully calibrated and nuanced tonalities and subtle warm and cool modulations in a very understated palette. The quietness of these paintings draws you into them in a meditative, contemplative way.

The paintings are remarkable not only for the unassuming, ordinary, modest subjects but for how much is actually excluded from the frame and edited out. The bottles and vases are both familiar recurring motifs and mysterious ciphers. He explores and articulates a series of relationships between them and gently plays with the formal elements of the still-life tradition, light and colour, form and space, positive and negative shapes in both a rigourous yet nonchalant way, comfortable within the confines of the genre like a classical architect innovating with but never abandoning The Orders. This highly conservative artist made still-lives that are more explicitly 'modern' in the series of paintings of 'geometrically'  composed boxes and bottles that are both flat and spatial at the same time and have rhythms and repetitions that are almost musical. 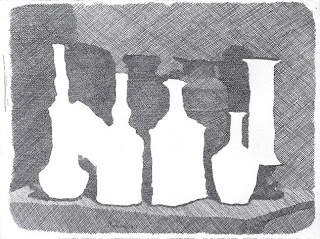 Giorgio Morandi, “Still Life of Vases on a Table,” 1931, etching

Looking forward to the exhibitions of  Zurbaran and Micheal Borremans coming to the BOZAR in January and February 2014. Both of these artists use a range of warm and cool greys, browns and creams that resonate strongly for me.


Michaël Borremans: A Knife in the Eye [english subs]

Posted by Alan Mitchell at 5:03 AM No comments:

Some more pages from the sketchbooks....... 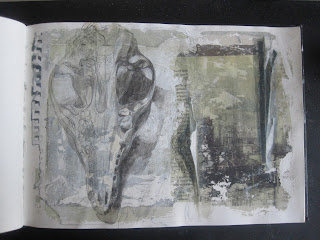 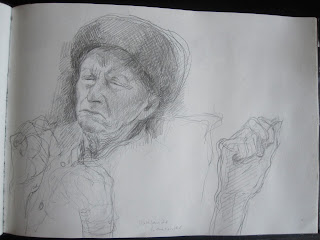 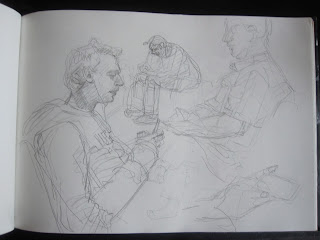 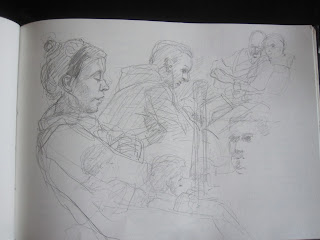 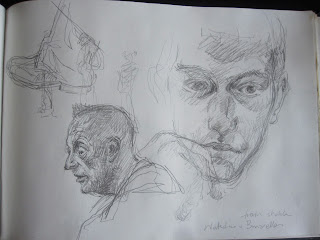 .......and a collage series exploring compositions with positive and negative squares 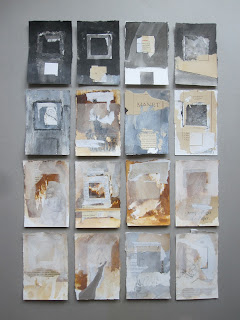 Posted by Alan Mitchell at 5:41 AM No comments: 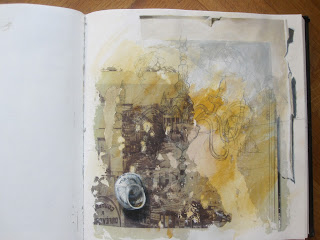 Started to use my sketchbooks working on top of drawings made waiting in airports or on holiday sitting in cafes - there are layers of gel medium transfers of photographic images and painted tromp l'oeil torn paper edges and a small snail shell - will continue to use the sketchbooks for collage and simulated collage with 'archeological' layers of marks made in different times and spaces superimposed. Most of this work is acrylic, ink and pencil with gel medium transfers and there is no real chronology in the sequence of the pages because I work back into and on top of previous notes and sketches made sometimes months earlier.
Posted by Alan Mitchell at 12:16 AM No comments: