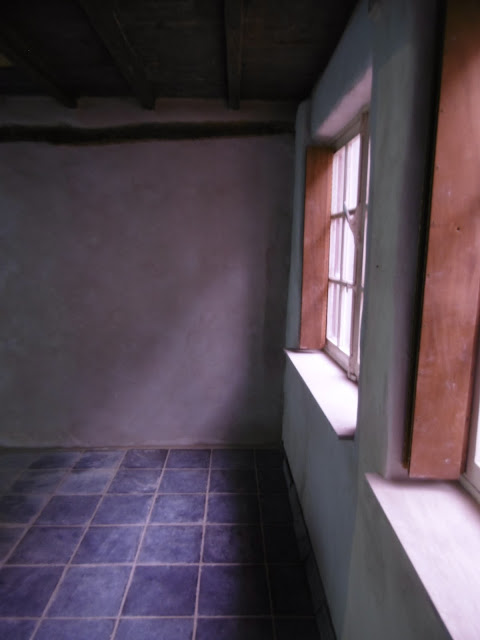 Saw the Bruges triptich of 'The Last Judgement' today, one of two versions attributed to Hieronymous Bosch (the other is in Vienna). The newly restored painting in oil on oak panels is currently on display at Arentshuis Museum. The transition from heaven to hell via the middle panel over which Christ sits in judgement flanked by trumpeting angels seems to be as much about a change in weather and atmosphere as a judgment between good and evil.  From left to right there is a transition from pale blue sky through grey clouds to a darker and more noxious red and black smoke filled hell of cities burning on the horizon. In the middle and foreground is a watery grey and brown terrain in which half human/half animal creatures cavort and play or submit to extraordinarily ingenious tortures. Both the anonymous naked and the more identifiable clothed people, including bishops, friars and nuns, inhabit a sinful world in which the ordinary paraphernalia of everyday life like a knife, a funnel, a slipper, etc., are transformed into a rooftop, a sailing ship and other whimsical contraptions.

If Bosch's atmospheric sky is an expression of the opposition between good and evil and heaven and hell then it might fit the thesis of Alexandra Harris' book 'Weatherland' which charts our inner and outer physical and emotional weather through art and literature under 'English' skies. Reading it I couldn't help thinking that the weather, rather like the art and literature, has a tendency to cross national borders, a fact born out by the influence of Claude on Turner or Dutch landscape artists like Van Ruisdael on Constable.  Perhaps English skies are in fact more European than some would care to admit and the weather a more connected global phenomenon that we sometimes make it in our local and perhaps parochial way.

The politics of the 15th and 16th century Netherlands were certainly as confusing and conflicted as our present day media driven 'post truth' politics and the world as uncertain, unstable, disillusioning and apocalyptic as Bosch's ordered vision of disorder suggests. Its hard not to be cynical about the motives behind the lust for power, material gain and pleasure when they are pursued by pious hypocrites but then who is not deluded by the same kind of folly in one form or another?  In 'Figures of Speech. Picturing Proverbs in Renaissance Netherlands' Walter S Gibson analyses the meaning of another painting by Bosch, his 'Haywain'.

'Bosch thus employed hay as the most fitting symbol of the intrinsic worthlessness of all temporal possessions, honors, and pleasures, especially when measured against the spiritual "goods" that the blessed souls will enjoy after death.'

'... The haywain shows how the transitory goods and honors of this world are greedily sought after by rich and poor alike, and not only laypeople but those in religious orders as well...... In the immediate foreground of the haywain Bosch.. shows us  various species of avarice. This the man wearing a tall hat and accompanied by a child at the lower left may well be a false beggar, one who does not need to beg. Nearby another man has set up a table with jars, charts,and other paraphernalia of the itinerant quack, his hay stuffed purse testifying all too clearly his success with the gullible.'

George Orwell's book '1984' and the current adaptation for the stage which we saw at the London Playhouse Theatre last month presents a vision of a particularly modern kind of totalitarian hell, one in which Newspeak has corrupted and devalued language, 'Big Brother' is always watching you and 'thought police' are everywhere, especially through the 'telescreen' and anyone guilty of thought crime ends up being tortured in room 101 and all trace of them eliminated by The Ministry of 'Truth'.

Coming out of the Playhouse Theatre with the art trip students a few weeks ago the play seemed as relevant to the present times as the book was when it was when it was first published in 1949.  We might say the same about Bosch.

Posted by Alan Mitchell at 11:06 AM No comments:

Laying a floor is a bit like making a Victoria sponge - you need to mix a lot of ingredients first, place them them down in layers and wait for them to set before you can put the icing on top. Finally last weekend the blue stone tiles were laid into place and all I need to do now is fix the stone skirting tiles and do a beeswax polish to bring out the colour -but that can wait for the moment when all the windows are sanded and painted. The pictures below show both before and after with summer excavations and the autumn capping of the finished work. 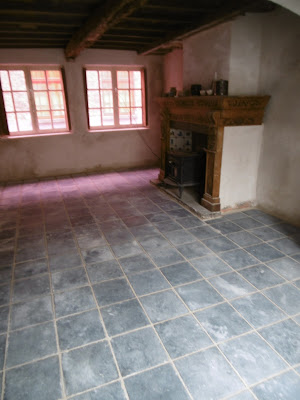 The cold November nights are dark early and at the weekend with a fire in the wood stove and candles lit inside and out the gathering darkness and enfolding silence is an almost dramatic event. 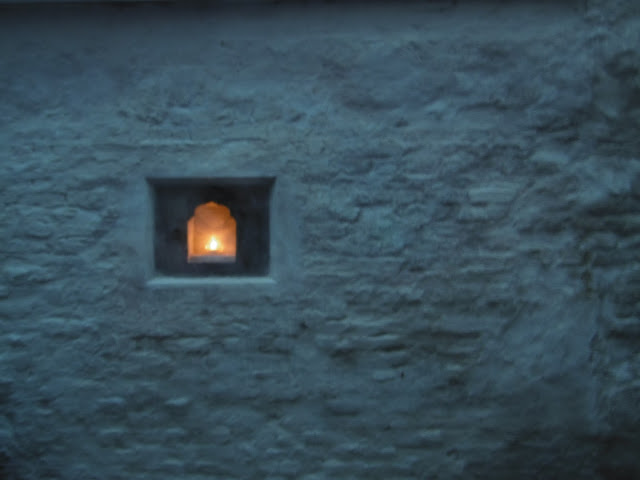 This sense of interiority that comes from being present inside a small room illuminated by natural light and in this case inner visionary light is certainly implicit in Robert Campin's small painting of the Annunciation.  Everything in the room is ordinary, quotidian, the tiled floor, the door to another room or hallway, the wooden beamed ceiling, the stone fireplace, the plain lime plastered walls, and the shuttered windows. There is calm, seclusion and receptivity in the relaxed and reading Virgin whose hand gestures inward to her heart and who modestly looks down as the angel, the only obviously supernatural presence, greets her. Here all the simple objects that furnish a room are loaded with significance if we know how to read them and like clues in a mystery point to a birth and a death in the past, present and future, both inside and outside of time.

'To see the world in a grain of sand
And heaven in a wild flower
Hold infinity in the palm of your hand
And eternity in an hour..'

'Auguries of Innocence' by William Blake

At Tate Modern Bhurpen Khakar's 'Yayati' offers another (deliberately and confusingly erotically ambiguous?) angelic visitation - this time one in which Puri, one of Yayati's sons, offers his youth in exchange for his father's old age. A sacred and profane image from the Mahabharata as lurid as the drunkeness of Noah in the Old Testament. 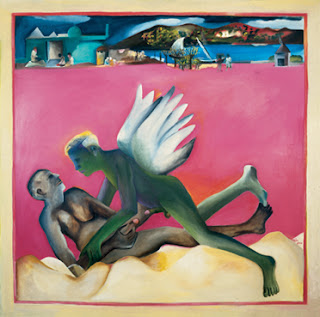 At times the paintings in the exhibition 'You Can't Please All'  remind one of David Hockney's early faux naif pop art paintings, R. B Kitaj's collage like paintings of literary and historical figures grafted on to distorted landscapes or the poems of C. P. Cavafy with their evocation of desire and memory and almost painful honesty about human encounters. These hybrid paintings fuse India in their colour and evocation of traditional and popular paintings and European religious art of early Italian Renaissance.

Yayati returns the youth he has taken from his son Puri and returns to old age having come to a realization after years of indulgence in sense pleasures that....

....not all the food, wealth and women of the world can appease the lust of a single man of uncontrolled senses. Craving for sense-pleasures is not removed but aggravated by indulgence even as ghee poured into fire increases it....One who aspires to peace and happiness should instantly renounce craving and seek instead that which neither grows old, nor ceases - no matter how old the body may become."

Posted by Alan Mitchell at 12:14 PM No comments: