( Written on the train between Brussels and Waterloo 16th December 2015)

Masked gunmen of the state patrol our transits where
Homeless migrants huddle, shelter and brood like birds.

Workers worry their way along, blinkered donkeys
To the promised carrot that will never arrive.

The smell of anger and fear lingers about the
Hallways in fetid air. What look unlocks the ‘self’

That binds the box of dreams and ignorance, what word
Awakens from the spell, un-makes this mind and world?
Posted by Alan Mitchell at 11:35 AM No comments: 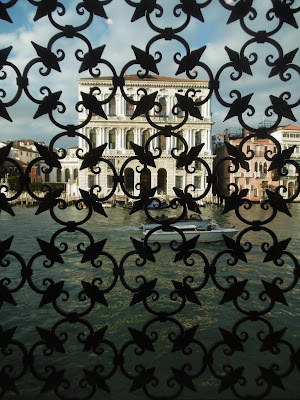 Its not surprising perhaps, given my previous comments about surfaces and spaces, that this year my attention in Venice was drawn as much to the walls and brickwork of the city in all its wonderful decay as to the art. 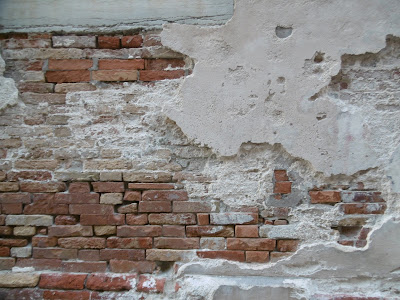 In the biennale itself, however, places like the Austrian pavilion, with its subtle re-modelling by Heimo Zobernig of the floor and walls, caught my attention. The 'frame' and the 'context' became both the 'picture' and the 'subject', quietly asserting the presence of light and space held by the interior architecture and complemented by a small courtyard garden with its delicate trees shedding autumnal leaves.  On entering the seemingly 'empty' space we are confronted by our own expectations and desire to search for something to 'fill' the space.

'His architectural intervention, whose isometric plans recall Mies van der Rohe’s Nationalgalerie in Berlin, together with the garden and rear wall of the courtyard, constitutes an enclosed site where one can linger and reflect on art’s modes of presentation and on human presence in space.

La Biennale di Venezia itself, no less than the specific site, is the starting point for Heimo Zobernig’s deliberations. How can one adequately contribute to an environment based on nation-state representativity where individual voices constantly compete for maximum attention? What phenomena are meaningful in such a context?' 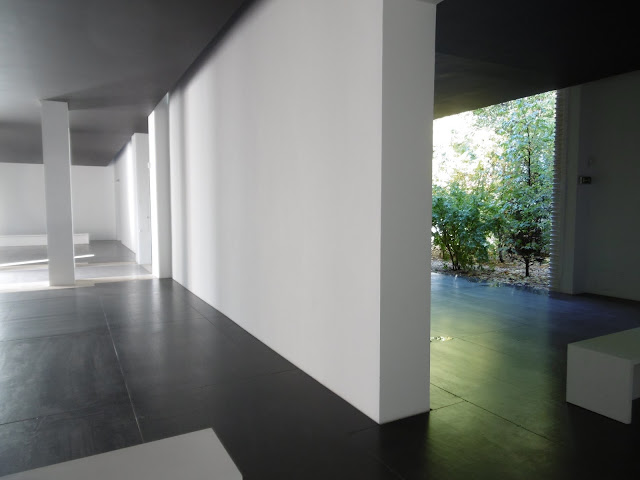 'Apotheosis' by Jiri David at the Czech and Slovak Pavilion used the overblown rhetoric of a 19th century painting, Alphonse Mucha's 'Apotheosis of the Slavs: Slavs for Humanity', in a conceptual installation that incorporated a large mirror in a carefully contrived space to engage the viewer as a participant in an emotionally engaging deconstruction of national identity. Juxtaposing contemporary minimalism with academic figuration, he sharply contrasted the 'emptiness' of the large open space with the 'fullness' of the narrow and constricted passage between the black and white painted transcription and its reflection in an opposite mirror.  In an interview in http://www.blouinartinfo.com/ the artist said,

'I sought answers to questions related to transformation of semantic terms, such as nation, home, homeland, myth, collective and individual memory, identity, or politics.' 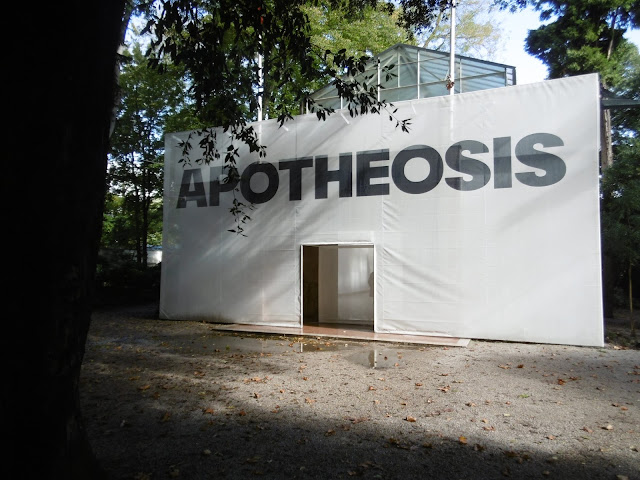 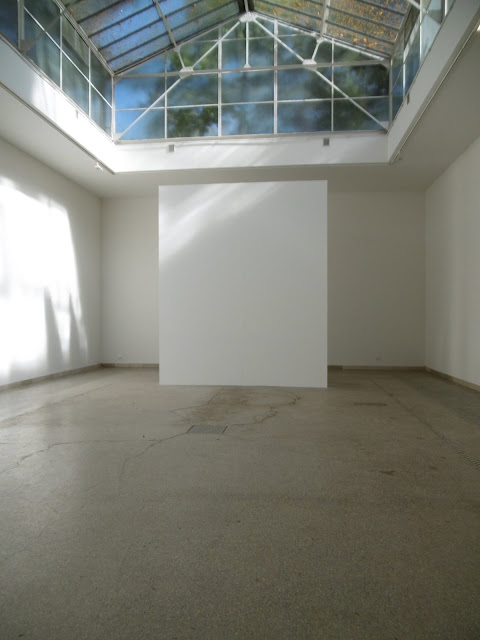 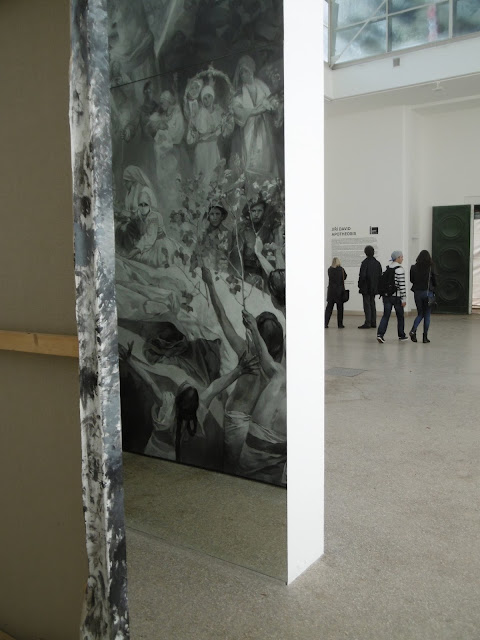 In 'Darwins Room' at the Romanian pavilion, all the visceral qualities of oil painting were on show. Adrian Ghenie shows that, handled with virtuosity, it has an extraordinary power to deal directly with our complex emotions and contemporary reality by bringing the full weight of historical practice to bear on our current cultural conditioning in contrast to the all-pervasive yet fragile and ephemeral infrastructure of electronic media that passes between the fingertip and the retina. By processing memory, desire and experience, physically and emotionally in this almost primordial way through the artist’s mind and body, he leaves rich and multi-layered accretions on the surface of the canvas which resonate with a viewer attuned to their visual calibrations and act as catalysts for complex reactions and responses to meanings embedded both in the material and the context.  According to the website below,

'expanding upon Darwin's 'laboratory, Ghenie proposes an interpretive path into the notion of survival. He reads into the theory of biological evolutionism and the ways it has been skewed to transform societies. He also draws upon other historical sources in his updating of this image (fundamental to our self-perception), ‘contaminating’ it with a keen reflection on neo-liberal competitiveness, extending across all areas and folds of social and affective life.'

I discovered this quote from the Danish-Vietnamese artist Danh Vo about his exhibition 'mothertongue' with its curious and eclectic collection of seemingly totemic objects that explored strange juxtapositions between objects charged with historical and political significations.

“As we are in Venice, I wanted to structure the exhibition around the idea of all these journeys: discovery of America, exploration of space, trade with China. All these itineraries that are connected in weird ways, often out of simple practicalities. There is just something beautiful about the material trail left behind by all these fallen Empires. In a way, the exhibition is a kind of travel through various time periods and cultures. This is an important point when one is in a position of national representation: that’s the moment when you have to make a statement that culture is not native; culture is cross-pollination, cross-contamination. It’s not only geography but time too.”
http://www.kunst.dk/english/art-forms/visual-arts/venice-biennale/

The delightful part of visiting the pavilions at Giardini in autumn is the possibility to look upwards vertically towards the zenith instead of horizontally whenever you need a change of perspective. 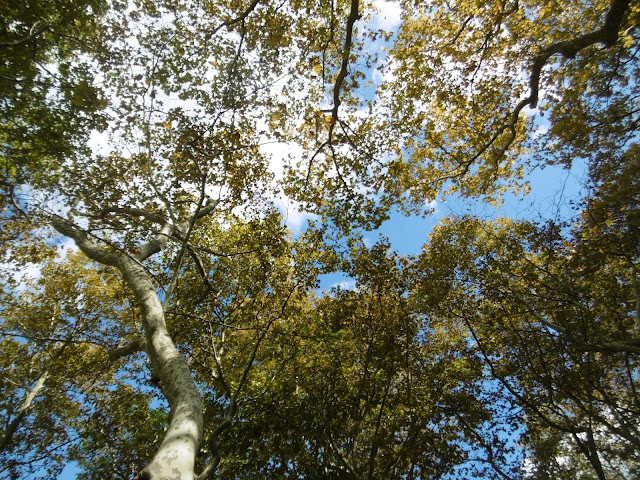 Posted by Alan Mitchell at 10:53 AM No comments:

Still pondering Venice after reading John Julian Norwich's long litany of war, intrigue and diplomacy in his history of the city and republic and came across this poem I wrote in 2012 that came about after seeing once again the Bellini Madonna's in the Accademia although the poem is based on a small reproduction of a painting in Bergamo. 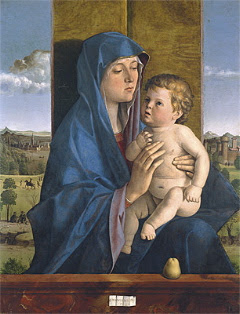 On Contemplating a reproduction of Giovanni Bellini's  Madonna and Child
in the Accademia Carrara, Bergamo

The rounded vessel rises like
A stable pyramid, azure
Mantle of sky and yellow
Earth awaken in the pallid sun
The painter's incarnation, word
Made flesh, womb and tomb,
Oil, wood, the mirror of the eye
kaleidoscope of time and space.

Between the architecture of
Picture frame and painted damask
Silk curtain, opens a window
To other times, distant places;
A hilltop village, slender tree
And blue infinity where clouds
float dreamily towards unknown
futures in the eternal now.
Posted by Alan Mitchell at 12:59 AM No comments: