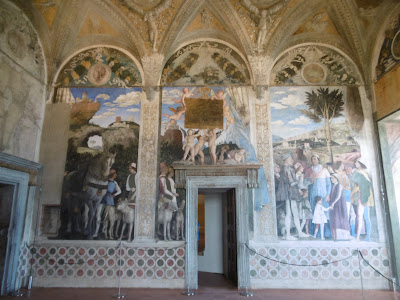 I had the opportunity this year of hearing two of Montiverdi's works at the concertgebouw in Bruges. Orfeo in August and The Vespers in October.  On a visit to the Palazzo Ducale in Mantova over the summer I was able to see the room where Montiverdi's 'Orfeo' was first performed - as well as Mantegna's wonderful tromp l' oeil fresco paintings of the Gonzaga family in the Sala delgi Spozi. These long dead faces from a family portrait live on in the thin layer of paint and plaster on a wall that has apparently absorbed the past occupants of the room and communicated their visible essence back to us like a mirror that mediates past and present. 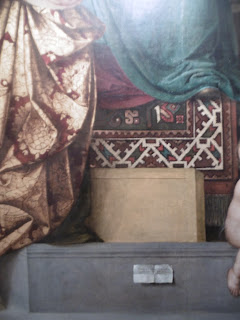 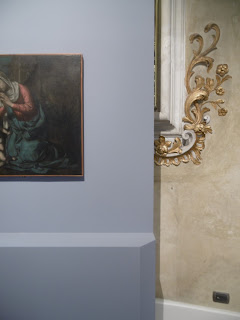 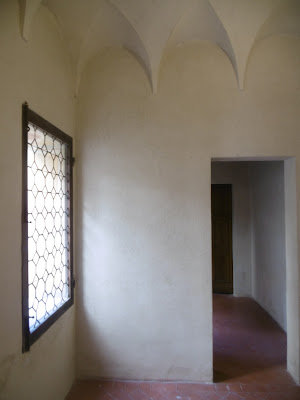 Strangely perhaps, its the corners or edges of things that frame the main subject that interest me most, and the smaller less important rooms where light from windows on simply plastered walls and space perceived or suggested through open doors become the central more intense focus of contemplation. This room above in Mantova has some of the qualities I would like to create in the rooms below in Bruges 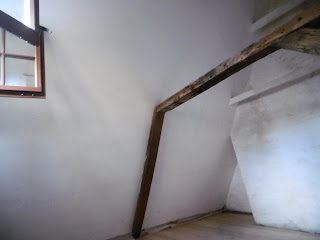 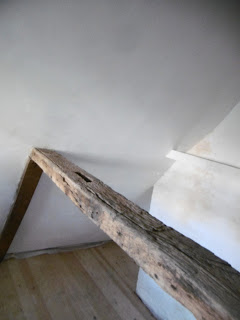 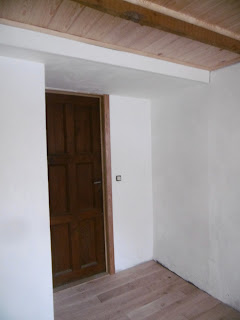 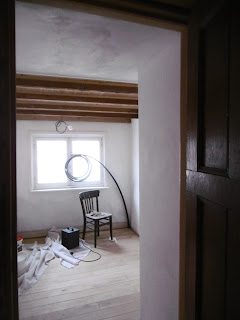 The patterns and forms we imprint in time and space, the traces of our living movement, remain behind, long after we have gone, fixed in inanimate forms and surfaces, like a shell or bone.  A  molded and painted surface of plaster is reanimated by the reflected gaze of successive generations and a score of music comes to life again in living breath of its performers and the ear or the audience. 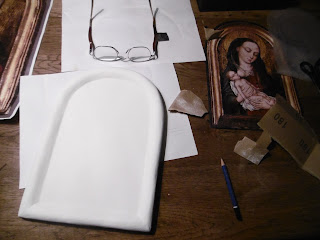 Building and modeling a small plastered wooden panel with a rounded arch and preparing a smooth gesso ground with successive layers of sanded plaster and paint ready to paint on is very like the process of preparing the walls in the house. First ensuring the structure is sound and all cracks and joints are consolidated, then building up successive layers of rough and smooth lime plaster to produce a flat smooth surface before building up layers of creamy white lime paint that will frame the light and space of the room rather like the panel will frame the sacred image with its surrounding of reflective gold leaf. Both seem to bring a mystery to life and both seem like repetitive, reflective, meditative and contemplative activities best pursued in quiet seclusion. Both are challenges that require effort, both bring an intense satisfaction and contentment. 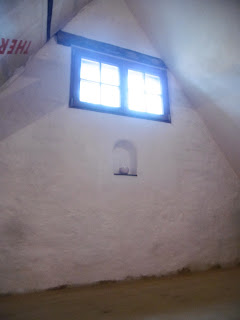 William Kentridge's 'Smoke, Ashes and Fable' at Sint. Jan's Hospital explores the past in dreamlike narratives that cross the boundaries between film, photography, animation, drawing collage and installation. Text and image become the means by which personal memory, myth, history and imagination are brought to bear on the theme of time and transience which resonates with this particular place where sickness and death were mediated with medicine, art and religion for hundreds of years.

I was reading Alan Hollinghurst's, 'The Stranger's Child' over the break and this also resonated with themes of time and transience. Several generations of a family are the subject of literary research and personal memory as the words and manuscripts of the fictional first world war poet Cecil Valance are scrambled and reconfigured and re-contextualized by the changing times and fashions up to the present day. What is perhaps significant is not so much what is remembered as how much is forgotten, lost or misunderstood.

One is reminded of W.H Auden's poem 'In Memory of W B Yeats'

From 5th  May  -16th September 2018 the Bruges Triennial will explore the 'liquid' nature of contemporary globalized society with artists and architects converging on the historic centre of the city to explore the relation and resonances between old and new. I plan to take an art trip to explore this with students. The text below comes from the website.

'A state of constant flux, driven by variation, pluralism and ambivalence can lead to uncertainty and even fear. But Bruges Triennial 2018 adopts the opposite stance as a possible beacon, a fluid city, open and involved, the engine of social, cultural and political change. Bruges as a creative melting pot where diversity leads to encounter. A seedbed for innovation in an urban context. With their artistic and architectural installations, the artists participating in Bruges Triennial 2018 | Liquid City – Vloeibare Stad create hospitable public spaces in the inner city. The temporary modifications they make to lesser-known and iconic places in the historic cityscape open up new opportunities for dialogue for residents and visitors alike.'
https://www.triennalebrugge.be/en

...........and in May also 'Gold-Brugse Stemmen Uit De Renaissance'  brings ancient works from the golden age of Bruges performed by contemporary musicians to various venues in the city with music from three masses.  The Tallis Scholars perform Obrecht, Missa de Sancto Donatiano in the Sint. Jacob's Kirk, the Huelgas Ensemble Clement. Missa Gaude lux Donatiane at te Concertgebouw and Psallents, Obrecht. Missa de  Sancto Martino at the Onze-Lieve Vrouwekerk, all taking place over the long ascension weekend and not to be missed ! 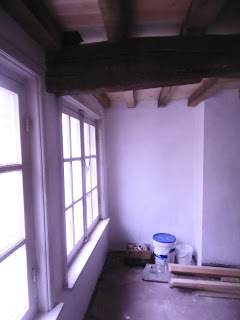 My own walls upstairs in the renovation are finally turning to a soft white creamy colour and as I fill, plaster, sand, smooth and give a first layer of lime paint my thoughts are turning to what I will hang and where. I will give pride of place to my father's collage which depicts a very particular Northern English landscape that could include references to any number of places from Liverpool to Lancaster with the mountains of the Lake District or North Wales in the background seen over either Morecambe Bay or the Mersey Estuary and an industrial townscape landscape with buildings from the 16th to the 20th century.

His method and process is to slowly build up the image from tiny fragments of torn paper from magazines etc that have the correct colour, pattern or texture. These reconstituted elements combine with drawing and layers of fine painting  to create a landscape of recollection, memory and reconstruction that is as accurate an evocative of both the feel and appearance of Northern industrial England as it is as unspecific about a particular or exact location, place or topography. This as much an interior as an exterior landscape, invented from observations collected and stored, and from memory and imagination and it is perhaps surprisingly more real and potent because of it. 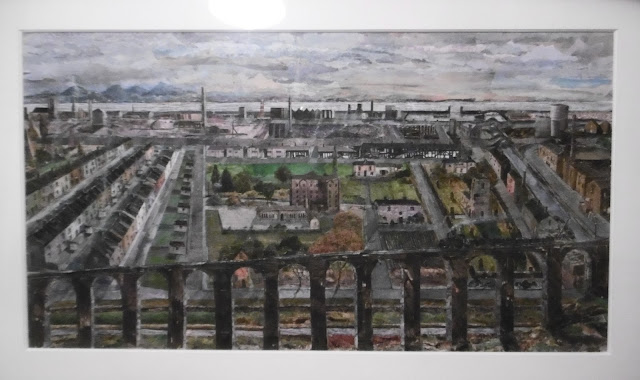 From the long extinct smoky chimneys of Northern England to the smoke, ashes and fable of William Kentridge's exhibition I added my own woodsmoke this weekend and was glad of it with the cold weather and sudden snow fall. Home is where the hearth / heart  is...... 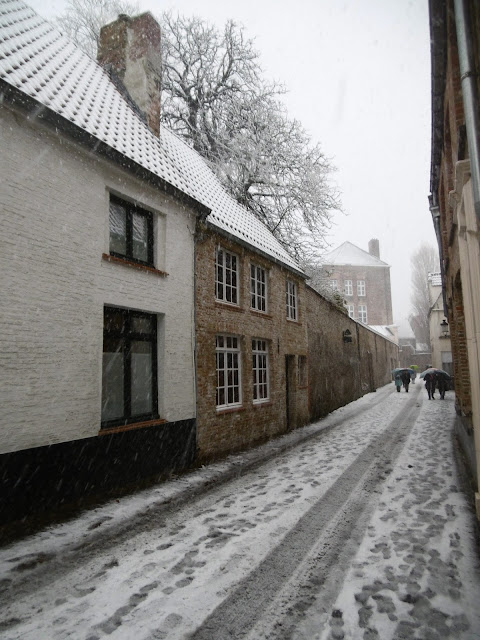 Posted by Alan Mitchell at 10:07 AM No comments: