Getting Plastered in Bruges...

Spent February break plastering the kitchen and was grateful for A's help to get eight more bags of lime when it looked like I would run out of supplies and to varnish the new windows. Each morning started with lighting the wood stove, making strong coffee and mixing the first of several buckets of lime plaster. First I worked on the wood fibre boards over the isolation that P placed around the windows and then on the prepared Ytong blocks. This large back wall felt like preparing a giant surface for a minimalist painting. I am not tempted at all to paint a 'fresco' or fill this empty space with anything.  Unlike on the old masonry walls this is a more a decorative final layer rather than the three coats of functional plaster that need to 'breath' in the older part of the house. 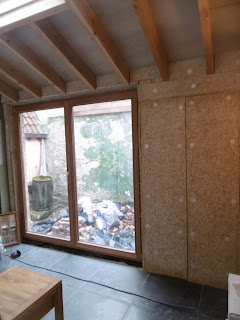 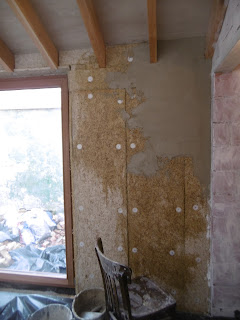 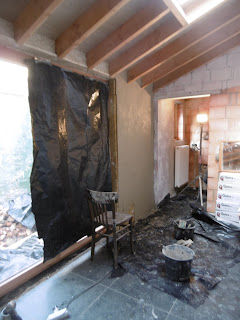 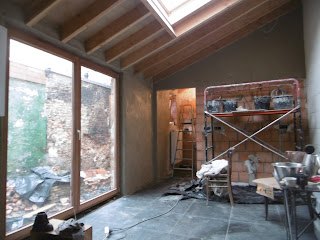 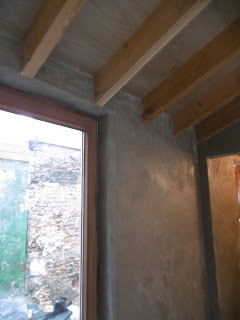 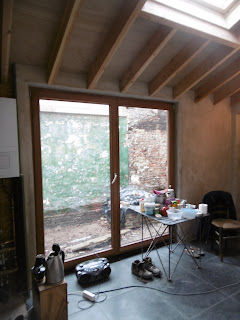 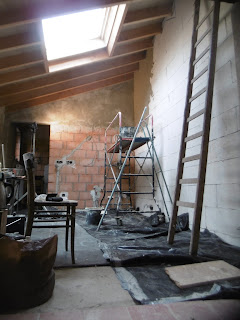 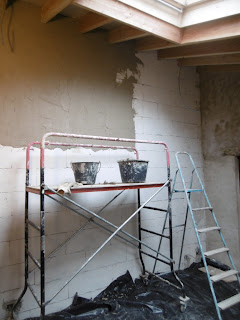 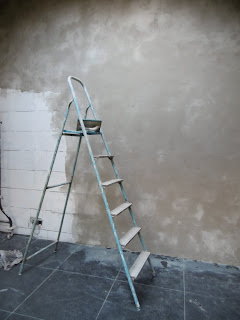 The daily 'sound-scapes' that become apparent in the emptiness of relative silence are as important for the sense of time and place as the windows, doors and other openings that filter the changing light and colours at different times of day and night and frame the views that connect inside and outside in dialogue with the body and mind when it is aware of and alert to these subtle changes.

The sound of the falcon screeching in the tower, the cooing of wood pigeons in the branches of the beech and chestnut tree, the voices from the road, the rattle of tourist's wheeling cases and the rumble of car tyres on cobbles and of course the bells that dolefully toll the hours or the tinkling of chiming carillons are all part of the music.

Taking time to look up at the stars on a clear night from the terrace I recognised Ursa Minor, Orion  and the Pleiades.

Bouts of plastering were punctuated by cups of coffee accompanied by cloud gazing and relishing the changes of light in the branches when the grey veil of rain lifted either from the terrace or through the skylights and windows. 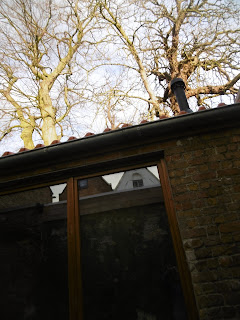 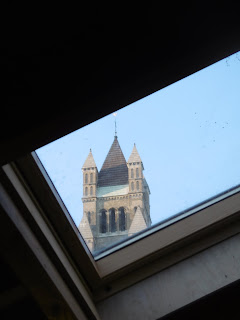 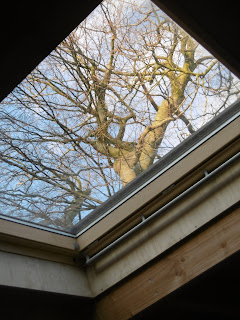 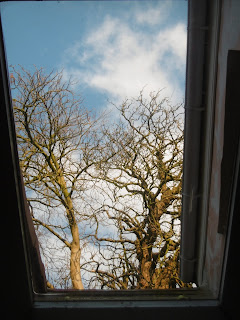 Retrieved my painting from the bookshop where they have been on display for a few months and found they look just as good placed against the newly plastered kitchen wall as they do adjacent to shelves of books. 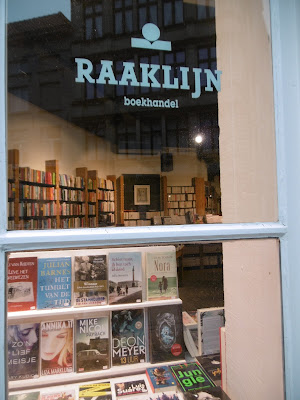 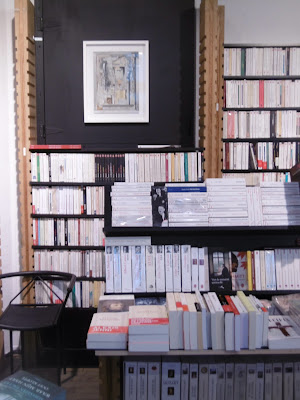 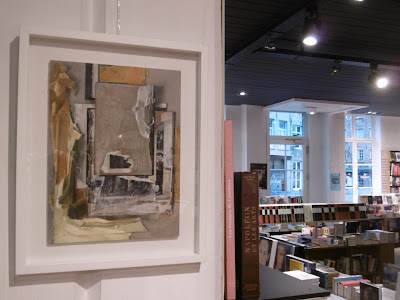 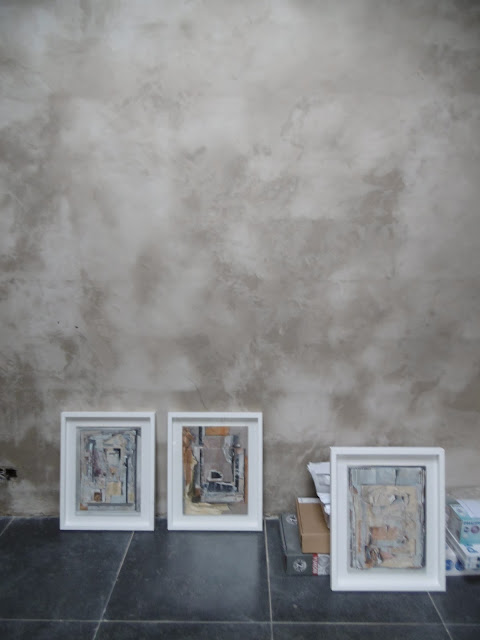 Have discovered a correlation between the processes and concerns in the house and in the paintings.  There is a preoccupation with materials, colours and surfaces in which windows, partially framed views and small contained spaces, fragmentary remains and traces on walls and in built, layered and painted surfaces act as 'mirrors of time' in which the boundaries between animate and inanimate, living and dead, are not so clearly defined but part of a circle of continuity in which things arise and cease dependent on causes and conditions.

The newly restored apse of the Onze Lieve Vrouwekirk was open so I went in to take at the colours and materials, the beautiful articulation of light and space and the marvelous brick vault. They have kept fragments of medieval painting which are part of the fabric and layers of the building's history. 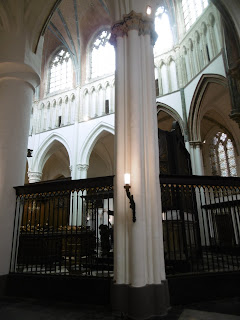 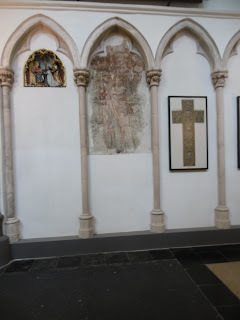 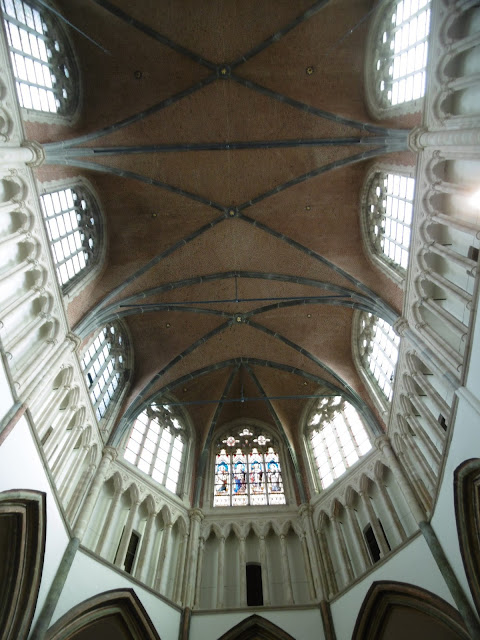 Took time out to see '45 years' with Charlotte Rampling and Tom Courtney at the Lumiere Cinema on Thursday evening. A house, a couple and a haunting from the past, in which a photograph in the attic and the ice of a Swiss glacier have frozen time, and preserved both a face and body, rekindling the sense of desire and loss like the pain of an old wound or the smouldering embers of an old fire. The actors faces and gestures reflected like mirrors the public and private memories and emotions evolving in the unremarkable ordinariness of an unfolding week in the life of this retired couple in a small Norfolk town. The interlocking of interior and exterior worlds and the cinematic illusion of reality is complete with acting that is almost invisible. 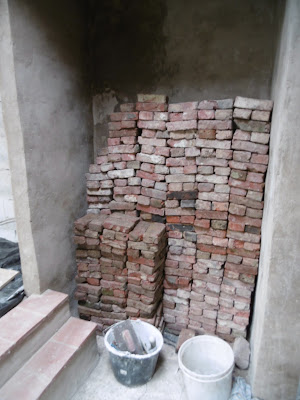 Tidied up the terrace and stacked more bricks ready for the hall floor which is the next job. Since these bricks are pre-industrial and hand made they often bear the imprint of the brick-makers fingers baked into the clay and each time I find one its almost like discovering a human fossil. I keep finding analogies between cooking and building. Both involve creativity in identifying, preparing and mixing various ingredients.  Bricks are just like bisquits in that they are made from shaped dough baked in an oven, except of course you can't eat them and they can be recycled after a couple of hundred years to rebuild a wall or make a floor. 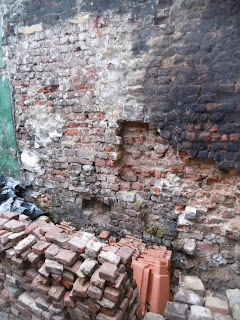 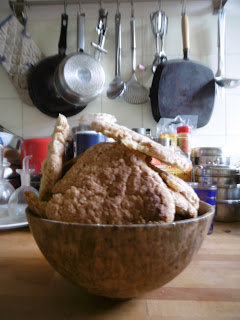 The cinema, galleries and museums, libraries and bookshops, shops, market, churches, public squares courtyards and gardens, and the concertgebouw are all within a 5 minute walk. There is no need to use public transport or drive as everything can be reached on foot. This human scale is perhaps the optimal size for urban community living rather than rural isolation and offers perhaps a blueprint from the past for the future of sustainable cities supported by local permaculture.  I would certainly like to experiment with my own small terrace by growing vegetables, salads and herbs etc. in meter square boxes in the shelter of a small 'hortus conclusus' around which the house folds in an L shape. I will certainly place a rainwater collection tank and would like if possible eventually to place some solar panels on the kitchen roof which cannot be seen from the road outside.  There is much potential in a small space where infinite worlds can unfold just as they do in the early Flemish paintings. 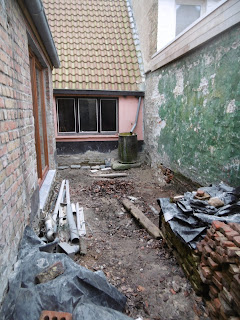 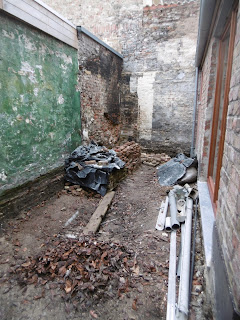 R and I went a couple of weeks ago to see Julien Libeer, Lorenzo Gatto and Hrachya Avanesyan and Sevek Avanesya in a last minute concert  replacing Maria Joao Pires who had to cancel through illness with Beethoven sonata for Violin and Piano in A, opus 12/2, Maurice Ravel's 'Le tombeau de Couperin' and Arno Babajanyan 'Klaviertrio in fis'  They received a standing ovation. The next concerts to book are in March with Rinaldo Alessandrini - 'Van Frescobaldi naar Bach' on the 18th and Concerto Italiano with Scarlatti and Caino on the 19th.

Posted by Alan Mitchell at 5:05 AM No comments:


Marianne Behaeghel's joint exhibition 'Sugar' ended the week at St. John's on a sweet note and the gallery was elegantly graced by both edible cakes made by parents and paintings and drawings of the same made by students in sweet and delicate pastel tints. 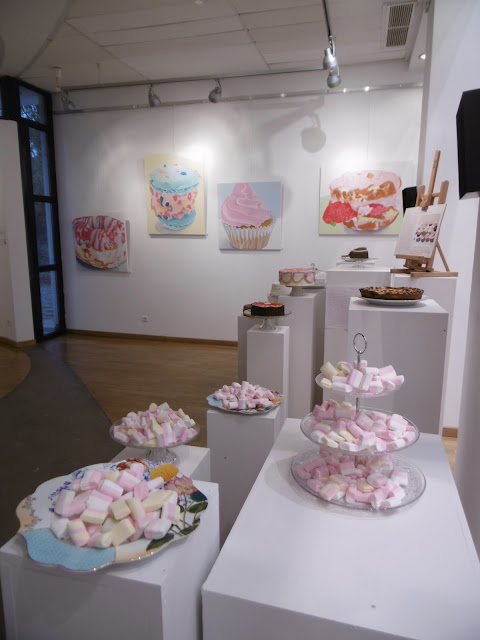 Given the problems of tooth decay, obesity and heart disease anyone would imagine that having a ‘sweet tooth’ was kind of addictive enslavement to sugary desires but a darker kind of enslavement is bound up with the history of sugar and this was also gently alluded to in the photography by Arnaud Pitz.

The ‘black gold’ of the contemporary world is almost certainly oil but in the 18th century for a period ‘white gold’ was the sugar produced by slaves transported from Africa through the port of Liverpool in the ‘middle passage’ to work in the plantations of America and the Caribbean.  This triangle involved the cruel exploitation of the labour of enslaved people used to manufacture the commodities of global trade and capital in the context of colonialism and the industrial revolution, feeding an insatiable desire for this new ‘sweetness’  in the emerging markets of the newly prosperous nations,  in addition to other commodities like cotton, tobacco and rum which found their way back across the Atlantic to Liverpool and other cities.

Tate and Lyle developed their sugar refining industry in Liverpool and elsewhere on the back of this trade and eventually in 1889 Henry Tate used the enormous wealth accumulated to endow a major national museum, an institution very much at the heart of British art and culture, the Tate Gallery, which has since been followed by series of museums including The Tate Gallery in Liverpool built in 1980s in the renovated site of Jessie Hartley’s Albert dock and warehouses. Ironically in the same site you can find the International Slavery Museum, the only national museum in the world dedicated to the history of the transatlantic slave trade and its legacy. Like Able Magwhich in Dicken’s ‘Great Expectations', the uncouth criminal turned self-made man in Australia, who uses his new wealth to transform Pip, who helped him in the marshes when he was a fugitive, into a gentleman, money like sugar was being refined and made respectable by being turned into high art and culture and given as a ‘gift’ to a grateful nation.

The blood horses of them colonists might fling up the dust over me as I was walking; what do I say? I says to myself, 'I'm making a better gentleman nor ever you'll be!' When one of 'em says to another, 'He was a convict, a few year ago, and is a ignorant common fellow now, for all he's lucky,' what do I say? I says to myself, 'If I ain't a gentleman, nor yet ain't got no learning, I'm the owner of such. All on you owns stock and land; which on you owns a brought-up London gentleman?' This way I kep myself a-going. And this way I held steady afore my mind that I would for certain come one day and see my boy, and make myself known to him, on his own ground."

http://www.tate.org.uk/about/who-we-are/history-of-tate
Posted by Alan Mitchell at 10:22 AM No comments: