Doors and Windows through Time and Space

Re-imagining, designing, constructing and painting a 15th century triptych in the manner of the Master of the Saint Ursula Legend. 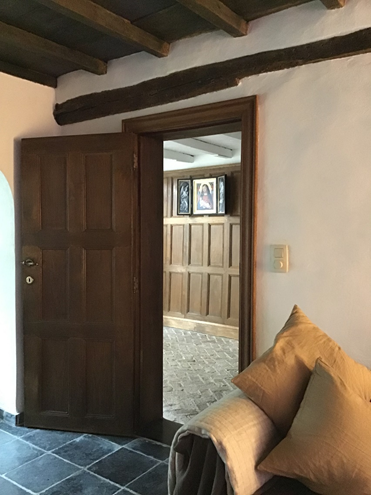 "....It is another world entirely, and it is enclosed within this one, with a peculiar geography I can only describe as infundibular. " He paused for effect. 'I mean by this that the other world is composed of a series of concentric rings, which as one penetrates deeper into the other world, grows larger. The further you go, the bigger it gets. Each perimeter of this series of concentricities encloses a larger world within, until, at the center point, it is infinite. Or at least very very large"................. 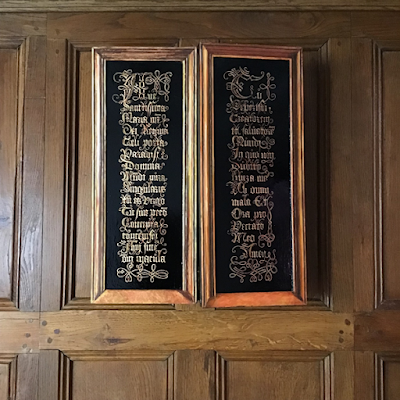 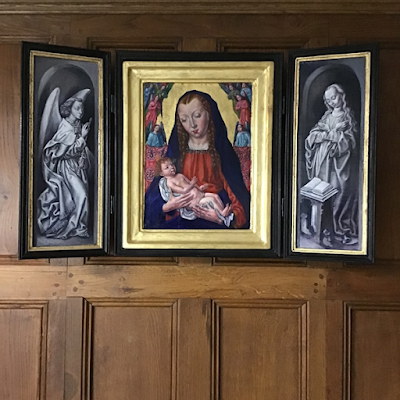 Finding, researching and assembling the elements of the ‘collage’.

The word ‘collage’ or ‘assemblage’ of existing fragmentary ‘found’ elements into a new configuration or whole is an accurate description of an aspect of the creative process involved in copying, following or working in the style of the Master of the St Ursula legend. Working in the workshop or circle of the artist implies a contemporary context in or near the atelier of the master, whilst following, copying or working after the style of the painter at a later date has a long history in the production and re-production of works of art, with many great masters themselves, like Rubens, producing copies or versions of works by earlier masters like Titian.

Rubens’ attitude towards reproducing an image was very different to the way we have come to view copies of Old Master paintings today. It was the Romans who first replicated artworks, copying Greek sculptures, and repetition was considered the best way of learning throughout the medieval period. During the Renaissance, the cult of the artist’s identity grew so that copying a work was as much an education as a means of honouring the master.

Even the idea of faking or forging the work of venerated earlier artistic style has been a practice since the Renaissance with artists as venerated as Michelangelo, early in their careers, establishing their technical and artistic credentials through creating works convincingly in the style of antique Roman sculpture passed off as genuine to admiring collectors. His celebrated statues of the sleeping Eros and Bacchus are cases in point.

“He also copied drawings of the Old Masters so perfectly that his copies could not be distinguished from the originals, since he smoked and tinted the paper to give it an appearance of age. He was often able to keep the originals and return his copies in their place.”

Giorgio Vasari, ‘The Lives of the Artists’

The references below explore the issues of forgery and the ethics of restoration:

‘With this project, the Groeninge Museum takes the important initiative of prompting a public debate about the grey area between restoration and forgery – the first debate of its kind and one that is likely to prove controversial. In view of the composition of the Bruges collections and the history of how they were assembled, this exhibition concentrates on the Flemish Primitives. The central subject is the work of the Flemish painter, art dealer and restorer Jef van der Veken (1872-1964), who is regarded as one of the founders of the restoration of old paintings in Belgium.’ 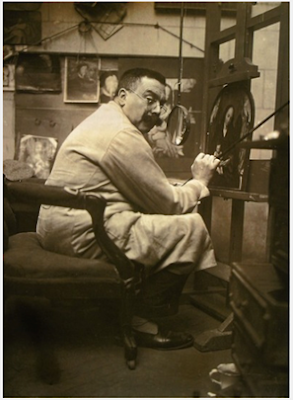 Whilst I had no intention to fake or forge a 15th century Flemish panel painting, I was interested in this tradition of learning from old masters by making an ‘authentic copy’ so to speak, by using similar historical technical methods of construction and following as closely as possible the practical processes of painting from the ground up to get closer to the mind and spirit of the artist and the work, and experience a tangible sense of connection to the historical past.  This reconstruction was also partly inspired by the examples from the Hamilton Keer institute, but unlike the students at this prestigious institution, I approached my project in a freer more intuitive and creative way rather than with a strictly academic and scientific method.

I was lucky in that I could study closely at first hand the actual paintings by the Master of the St Ursula legend in the Groeninge Museum in Bruges alongside making use of often excellent museum the digital resources online.

I chose to create a triptych with a central panel of the virgin and child flanked by angels with inner side ls representing the annunciation ‘en grisaille’ by freely adapting several works by the Master of the St. Ursula legend which came from different contexts into a configuration which he is not known to have made but which he could conceivable have done.

The outer panels with their calligraphic text were based on a work by Hugo Van de Goes which was probably assembled in its current form in the 19th century from different works. 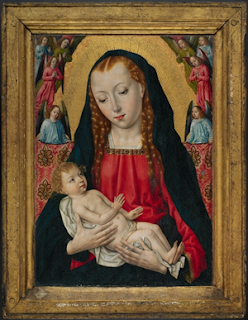 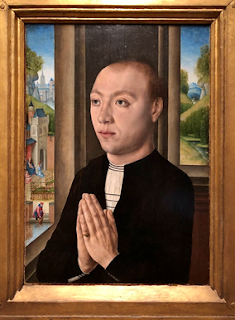 The panel on the left, which I used for the central panel of my triptych, is of ‘The Virgin and Child with Angels’ currently in the Fogg Art Museum, Cambridge, Massachusetts. It was the companion to the now separated right hand panel, the portrait of Ludovico Portinari with a view of Bruges in the background, from a votive diptych. This right-hand panel is in the Philadelphia Museum of Art. Lodovico Portinari’s powerful family represented the interests of the Medici in Flanders. Hinged to Portinari’s portrait, the painting would have offered intimate, perpetual access to the Virgin and Child, who are made present in an image of visionary splendor.

Both paintings are by the Master of the Legend of Saint Ursula, active in Bruges c. 1470 - c. 1500. Little is known about the Master of the Saint Ursula Legend, so called by the art historian Max Friedländer as an emergency name after a series of panels in the Groeninge museum in Bruges, and certain stylistic similarities between works attributed to him. It is likely that this anonymous painter lived for a while in Brussels and later moved to Bruges, as his style includes references to Rogier van der Weyden, Hugo van der Goes and Hans Memling. A 15th century Bruges painter who might be the same artist has been identified as a certain Pieter Casenbroot who was registered in the Bruges guild of saddle makers and sculptors in 1460.

For the side panels I needed to find an appropriate flanking subject by the same artist that would fit the proportion of the central panels of the Virgin and Child.  An annunciation theme seemed the most likely to fit the theme and format, and there were several possibilities I considered using as references.  The first that I looked at came from the two opposite panels at the top of the large side panels of an altar piece (in their closed state) by the same master of the Saint Ursula legend in the Groeninge museum in Bruges. These were painted ‘en grissaille as trompe l’oeil sculptures in niches. On the opposite side the panels in their open state reveal the polychrome narrative sequence of events from the life of Saint Ursula. The large central panel of the altar piece here is of course missing.


For the outer panels in a closed state I needed something that would match the scale and proportion, be appropriate to the theme of inner subjects of the Virgin and Child and Annunciation but also create a contrast with the juxtaposition of word and image, and a play on the idea of the incarnation. (‘Et verbum caro factum est’- ‘And the word was made flesh’). The painting below, with it’s calligraphic text on the inner part of the side panels, attributed by the National Gallery to a follower of Hugo Van de Goes, was probably assembled in its current form in the 19th century from different works.  The complexity of working out how to get this transferred onto a gold or copper leaf ground by working in the negative space between the letters was an interesting challenge. 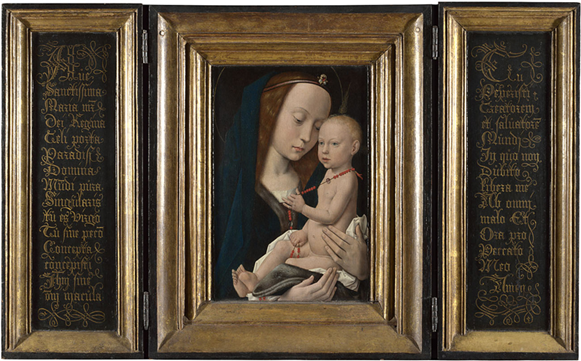 Hail, Most Holy Mary, Mother of God, Queen of Heaven, Gate of Paradise, Mistress of the world, thou are a uniquely pure virgin; yourself conceived without sin, you conceived Jesus without any stain.

You have borne the Creator and Saviour of the World in whom I do not doubt. Deliver me From every
evil and pray for my sin. Amen.

The practical stages of the process.

I was able to use the seasoned wood remaining from of the salvaged solid oak paneled doors which we used in the house to construct the panel, along with some recycled carved mouldings to create the engaged frame. 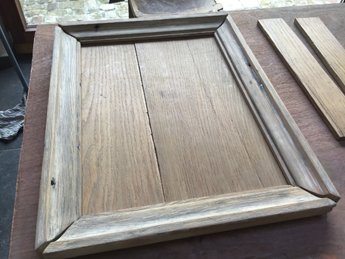 Once the central panel was prepared I created a box cradle to support it and take the hinges for the side panels which I also then measured and matched, with appropriate mouldings, repeating the linen, sizing and gesso process to prepare the painting surface. 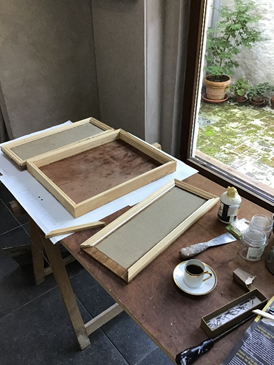 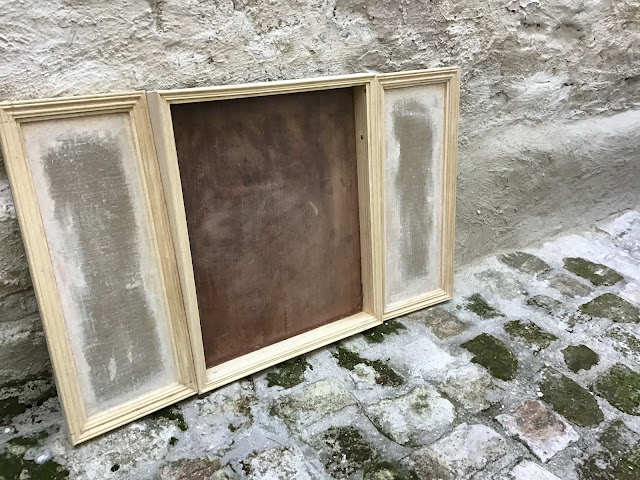 I was then ready to begin the gilding and painting of the central panel - first with a 'verdigris' layer, or a painting ' en grisaille ' in a water based medium to work out both the design and the tonal balance. For the gilding I used a water gilding process on top of the red clay bole. Before painting I traced out the basic outlines of the design as a basic guide. 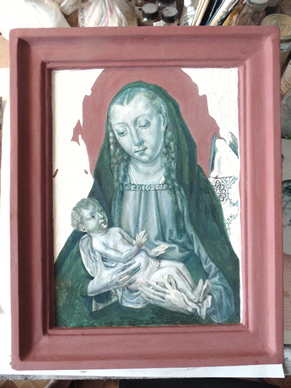 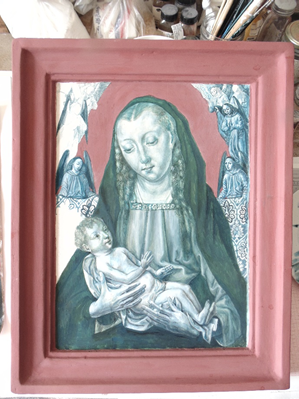 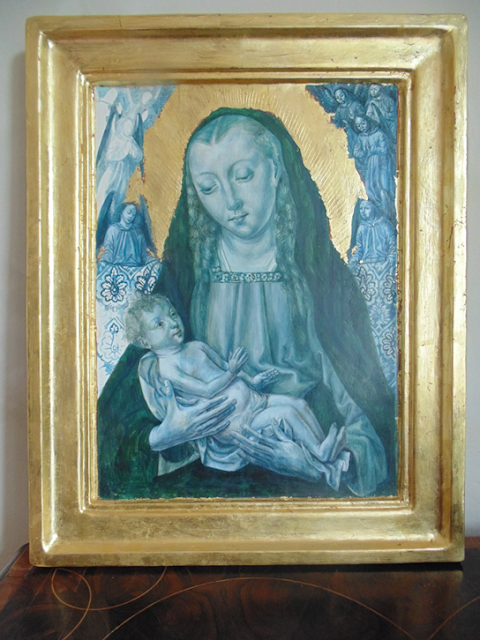 The process of building up layers of transparent oil paint on this original monochrome tonally painted surface surface took a very long time. The colour had to be built up slowly to build the right intensity of hue and tonality to match the original. I was using modern oil paint rather than oil paint made from the traditional materials like cinnabar, malachite, lapis lazuli, or lead white, (which are still produced by the German company Kramer, and which I am using on another similar project below mixed with egg tempera).
I was still able to practically envisage something of the original painting process necessary to produce such a panel. 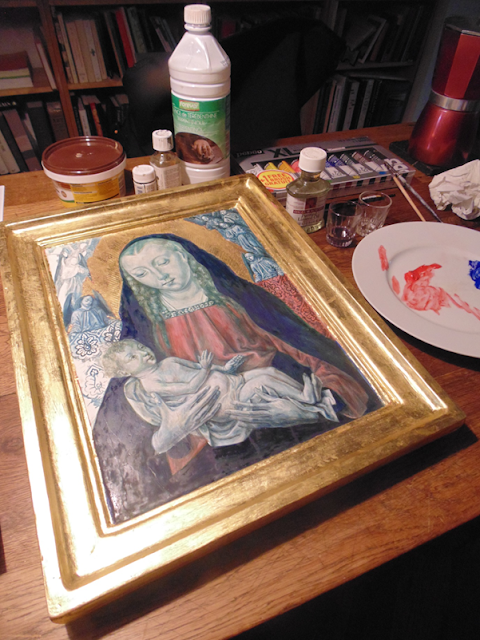 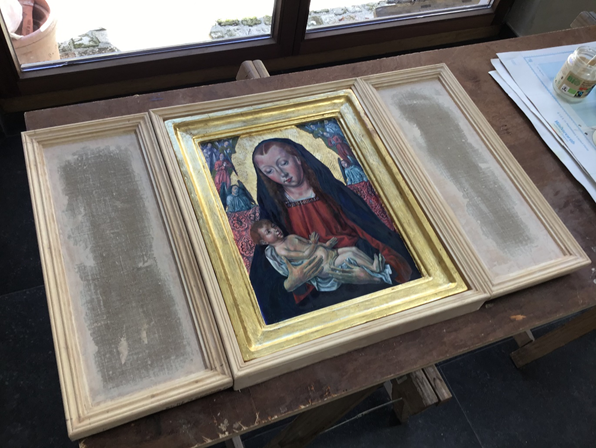 For the details like the face, hair, and in particular the jewels on the collar of the Virgin I was able to closely study the works in the Groeninge Museum at first hand to try to understand better the paint application. The painting below of Saint Veronica was especially helpful for the jewels.
https://www.museabrugge.be/en/virtual-tours/groeninge-zaal-2-3
As the central panel progressed I had to work out how to get the highly elaborate, stylized text for the outer side panels into place using gold and copper leaf, and to begin painting the figures 'en grisaille' for the inner part of these panels. After scaling up and producing a detailed tracing of the text for each panel, I gilded the central sections in copper leaf and transferred the text to water gilded surface, under which I had placed a yellow bole, carefully painting the negative spaces between the letters a Indian ink 'lacquer', working in reverse to the normal way of painting calligraphy. This was a very slow and laborious process but with some persistence it was effective, in keeping the letters with their shiny metallic finish set off against a black ground. 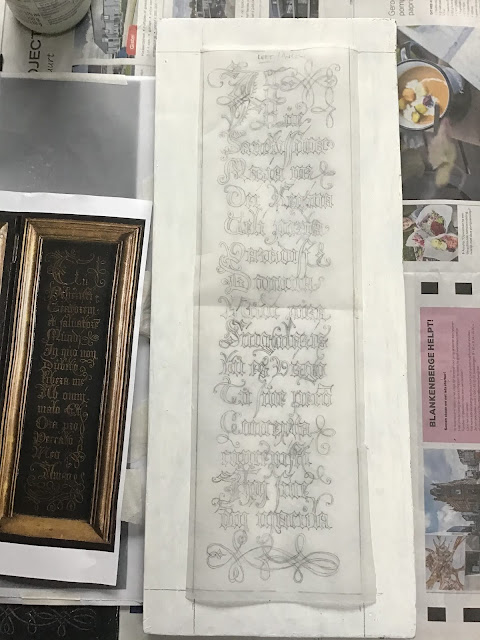 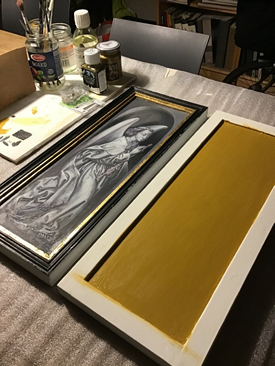 The yellow bole in place on the right-hand panel ready to receive the copper leaf  to provide the 'gold' surface for the lettering. The left-hand panel with the Angel Gabriel fully painted 'en grisaille' 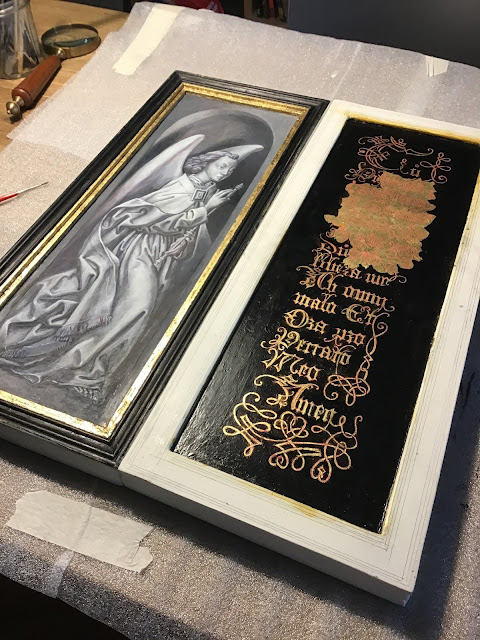 The almost completed infilling of the negative spaces between the letters, working in reverse to produce a gilded calligraphy. 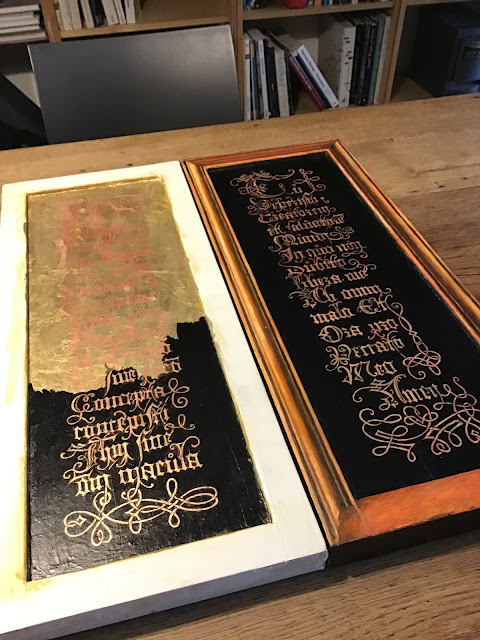 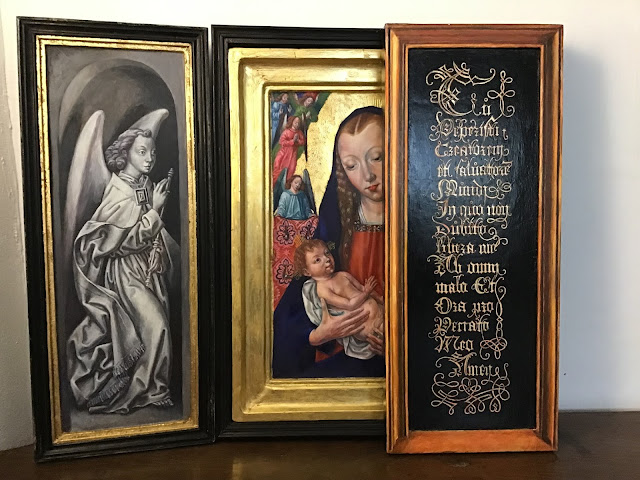 The final assembled panels in place awaiting the hinges and below, hinged and hanging on the same recycled solid oak door panels  it is actually made from which have also been re-purposed as wood paneling in the hall to match the doors. 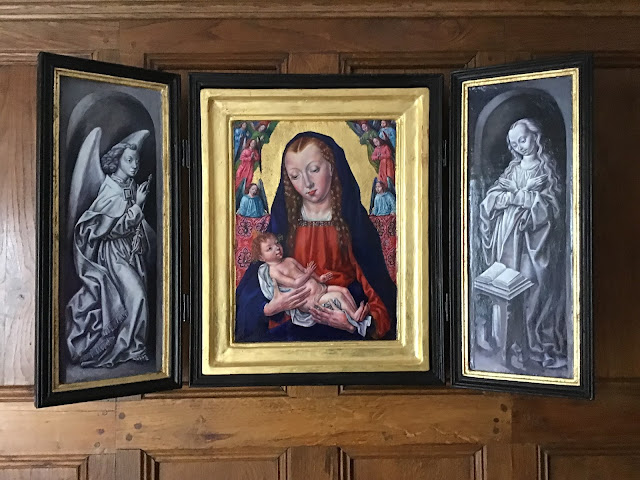 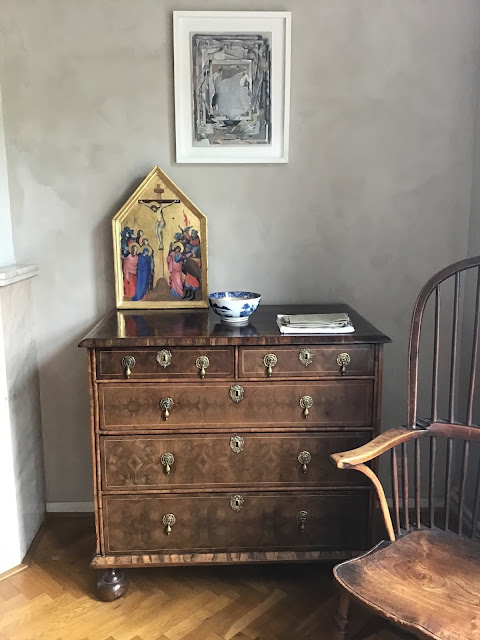 Copy, egg tempera on panel (on the chest) and Original tromp l'oeil oil on panel on the wall, both Genuine Illusions !

Posted by Alan Mitchell at 4:34 AM