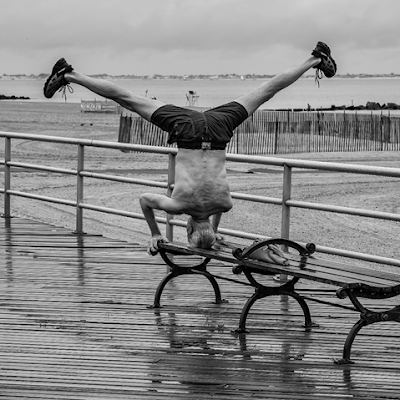 In film and photography, history and myth, both the fantasy and reality of New York City has fascinated generations of creative artists and their audiences throughout the 20th century and beyond. This unique city’s unmistakable landmarks have formed a backdrop for countless human dramas played out in a great melting pot of humanity, producing some of the most iconic images of the 20th century. The history of photography from its 19th century origins to the present day runs parallel to the meteoric rise of this modern city, as well as the ebb and flow of American economic prosperity and politics. Kevin Roy’s well-crafted digital images are both a celebration and a nostalgic elegy to that city and to some of the most celebrated and inspirational black and white photography of the last century. With warmth, humour and professional precision he offers us a timeless photo journal of 27 days walking a city he knows well and loves. This is an intimate and personal view of both the urban fabric and its residents, the city and its character. Paradoxically, carefully framed yet spontaneous moments are captured and frozen in the eye of the camera.  These images raise as many questions as they answer in their thoughtful and gently ironic juxtapositions, and they challenge us with their ambivalence towards and ambiguity about the relations between time and place, appearance and reality, and the nature of the black and white photographic icon itself, both analogue and digital, in the age of instant electronic gratification.

Along with the exhibition and opening we plan to host an interview, discussion and presentations, with invited groups of students, teachers and parents, with a critical analysis of some of the iconic images from a selection of 20th century photographers whose work has inspired Kevin Roy’s photographs. In addition we will supplement and enrich this focus by taking the IBDP visual art students on an art trip on November 10th to Museum of Photography at Charleroi. https://www.museephoto.be/

The inspiration came from a childhood with far less media than we have today, where I spent hours actually turning pages to look at still images in publications like Life Magazine and National Geographic. Rebuilding Egyptian Temples, Vietnam, the Civil Rights struggle in America, I can still see those photojournalistic images in my mind. The obsession began with a $10 Brownie, the Kodak kind, and road trips in the family station wagon. Over five decades later, after a series of ebbs and flows in creative output due to the exigencies of life, my photo kit now weighs more than my cloths when I travel. I continue to be inspired by both well and little-known photographers, but mostly by my urge and need to wander through and observe the world, and to capture details in places, things, and people that speak to and express the emotion of the place they inhabit, both present and past. My passion persists through the fact that there will always be more to see, and the question, “What can I learn next?”

Posted by Alan Mitchell at 5:54 AM